Don't use plagiarized sources. Get your custom essay on
“ Lives of African Americans between 1877 and 1928 and Effects of Industrialization ”
Get custom paper
NEW! smart matching with writer

This serves to show how racial discrimination was deeply rooted in the United States during this period. The African Americans faced a lot of problems during this time and they made attempts to deal with these problems. At this time, racial segregation was rampant and was supported by the Jim Crow Laws. These laws were meant to limit the freedom of the African Americans by allowing segregation in all areas of the society which included restaurants, hospitals, washrooms, schools, and transport services.

The laws were meant to support separation of the black Americans and whites by offering them equal facilities but this was not the case (Media Projects Incorporated 24). The facilities of the blacks were poor in quality and not equal to those of the whites. Some of the African Americans responded to these by defying the laws which led to their prosecution where they always lost the cases. Apart from racial segregation, the African Americans also faced lynchings from white mobs and those who participated in the lynchings often went unpunished (Media Projects Incorporated 26).

Another thing is that the states were passing laws that made it hard for the African Americans to vote which included literacy tests and poll taxes (Media Projects Incorporated 32). The African Americans formed institutions and organizations to address their concerns. One of these is the National Association of Colored Women which was formed in 1896 (Media Projects Incorporated 26). This group aimed at helping the poor in the society by providing health care education.

The group also called for the revocation of the Jim Crow Laws as well as ending of racial segregation (Media Projects Incorporated 26). In a bid to ensure that African Americans achieved education, the Tuskegee Institute was started and its aim was to equip the African Americans with skills to enable them to become school teachers as well as gain other skills (Media Projects Incorporated 31). The Niagara Movement was an organization that was founded in 1905 and whose aim was to fight for the African American civil rights.

His approach to achieving civil rights was that African Americans should have concentrated on improving themselves economically rather than concentrating on demanding civil rights and social equality (Media Projects Incorporated 38). He also advocated for acceptance of racial segregation. Another leader was Du Bois who started the Niagara Movement and his approach to achieving civil rights was that higher education and not mere trades was the way to equality (Media Projects Incorporated 38). Though the African Americans were relentless in their fight for equality, they achieved little by the end of 1920s.

By the end of 1920s African Americans could buy homes in neighborhoods that belonged to whites but they did not live in peace and were constantly being terrorized by gangs and the police did not intervene in these cases (Schneider 66). Segregation in the northern schools by this time was gaining popularity and by the end of the 1920s, most of the schools in the northern part of the U. S. practiced segregation just like in the south (Schneider 67). A remarkable achievement was the reduction of the lynchings. For example in 1929 there were only 7 African American lynchings (Schneider 63).

Industrialization increased conflict between the whites and the African Americans in some ways in that these two groups now had to compete for the available jobs (Healey 197). With the complexity of the industrial structure, there were less cases of discrimination especially when it came to allocation of jobs based on race and this meant that in industries the Jim Crow Laws were not applied. This also meant that the opportunities for the African Americans who were among the minority increased. Immigrants were also affected by industrialization.

The increased demand for labor in the industries encouraged immigration. The government policies at that time did not restrict immigration. Industrialization created job opportunities for these immigrants. The period between 1890 and 1910 saw immigration of a large number of people into U. S. (Howard and Pintozzi 106). The immigrants came into U. S. due to industrialization but the motives were different; there were those who immigrated into U. S. to escape hardships in their countries while others immigrated in search of jobs.

These people had cultural practices that differed greatly with those of the Americans and the increased immigration led to overcrowding in the towns. This led to introduction of immigration restrictions. For example in 1907 Japan and U. S. signed an agreement that would see Japan limit immigration into the U. S (Howard and Pintozzi 106). Industrialization also affected farmers. Industrialization led to abandonment of farming by the farmers where they moved to cities in pursuit of higher wages (Howard and Pintozzi 104).

Lower wages in the farming sector was due to increased costs of farming as well as well as a reduction in the cost of agricultural products (Howard and Pintozzi 104). On the other hand, farmers benefited from industrialization in that the increased number of people living in the cities meant that there was a ready market for the agricultural foods. The railroads facilitated this in that they provided a means for the transportation of farm produce into the cities. In addition, some of the factories utilized farm products and this meant that the farmers had a market for their products.

Another thing is that industrialization led to advancement in agricultural equipments as well as agricultural techniques and this led to increased production. Another group that was affected by industrialization is the industrial workers. Following industrialization, the composition of industrial workers changed greatly where the number of child laborers increased greatly. These child laborers were members of families that had moved from the farms to the cities in search of better wages (Healey 197). They were more popular among the factory employers than the adult laborers as they were cheap and less likely to strike.

This increase in child labor led to rise of movements that advocated for labor reform. Another thing is that the bulk of industrial workers during this period comprised of immigrants (Healey 197). These industrial workers benefitted from improved products following the introduction of better agricultural techniques. Due to a large number of the people who were willing to work in the industries, the industries paid their workers low wages, the workers worked for long hours, and above all the working conditions were deplorable (Healey 197).

This led the industrial workers to form labor unions during this period in an attempt to demand for improved working conditions. Clearly the period between 1877 and 1928 is an important period in the history of U. S. It is a period marked by endless struggles by the African American community as they try to fight injustices and gain equal rights with the whites. It is also an era marked by great changes in the American society following industrialization.

Lives of African Americans between 1877 and 1928 and Effects of Industrialization. (2016, Sep 25). Retrieved from https://studymoose.com/lives-of-african-americans-between-1877-and-1928-and-effects-of-industrialization-essay 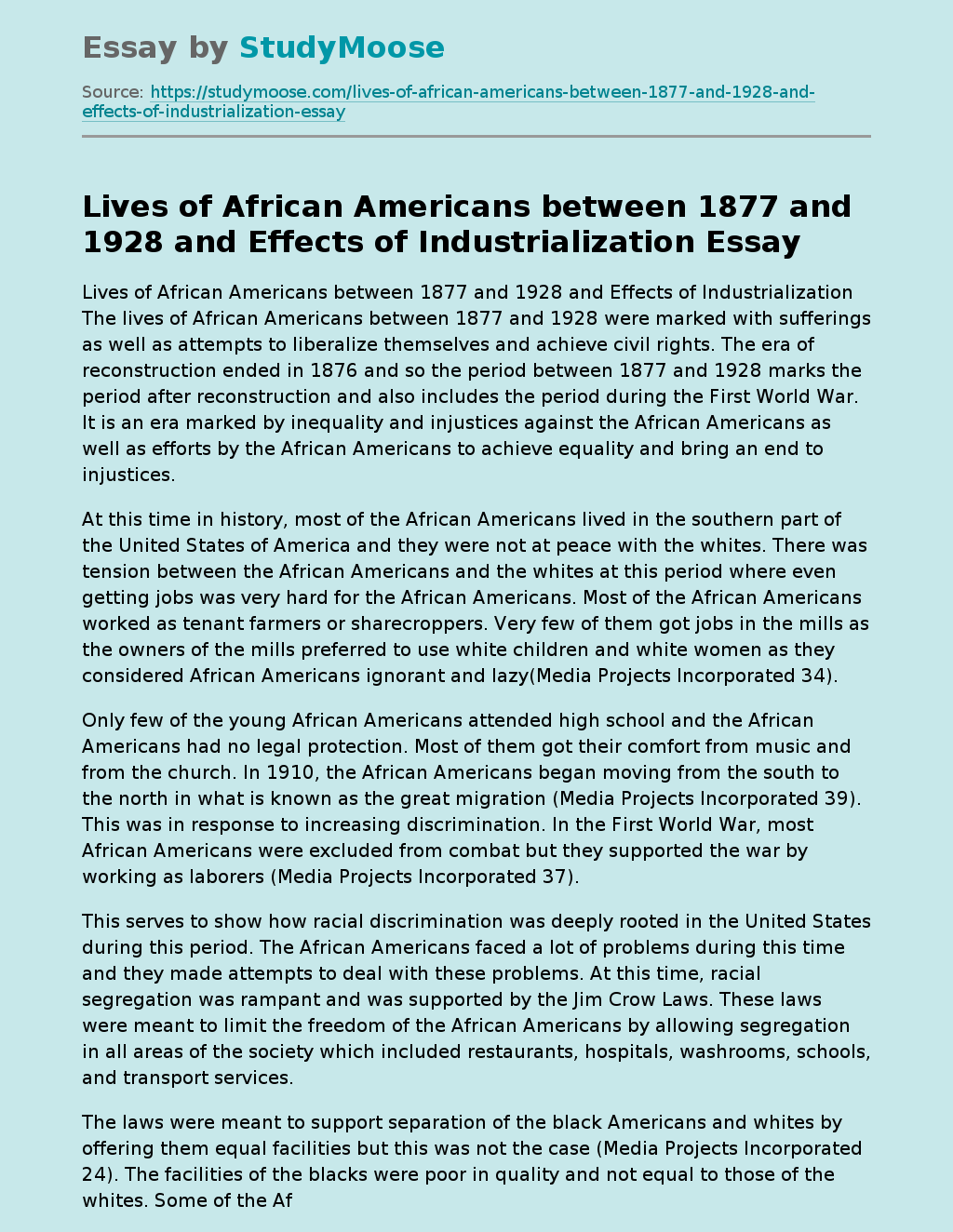