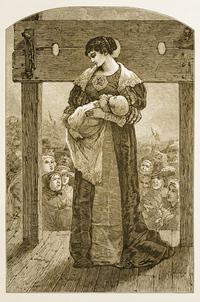 Hester Prynne is a young, beautiful, and married woman who has an affair and gives birth to a child out of wedlock. She is forced to wear a scarlet letter “A” on her chest as punishment and is shunned by her community. Hester’s husband, Roger Chillingworth, arrives in town seeking revenge on the man who he believes has wronged him. Hester’s lover, the Reverend Arthur Dimmesdale, is wracked with guilt and struggling to maintain his position in the community.
The novel follows Hester, Dimmesdale, and Chillingworth as they deal with the fallout of Hester’s affair. Hester is ostracized by her community but finds strength in her own character. Dimmesdale is tortured by his guilt and torn between his public persona and his private desires. Chillingworth is consumed by his revenge and slowly destroys Dimmesdale’s life.
The novel is set in Puritan New England and explores themes of sin, redemption, and morality. Hester Prynne is a complex and sympathetic character, and her story is a timeless tale of human fallibility and strength.