Literary Genre is the way the author builds or tells the story for the reader. The Literary genre of a text consists of the devices and techniques that impact on the reader’s emotions and thoughts.

Exploring the Literary Genre of ‘Casablanca’ by Michael Curtiz.

‘Casablanca’ is a melodrama; a war move that explores of the universal themes of love and sacrifice, but when the film was released in 1942, audiences viewed it as a political allegory about World War II.

Don't use plagiarized sources. Get your custom essay on
“ Literary Genre of ‘Casablanca’ by Michael Curtiz ”
Get custom paper
NEW! smart matching with writer

In ‘Casablanca’, the story is told in the third person. What we see and hear on screen has been carefully selected and presented to us by director Michael Curtiz. However, during the film we also see events from different characters’ points of view. In ‘Casablanca’, the audience for the most part sees from the perspective of Rick and his experiences. Most audience members feel comfortable with this type of narration because they feel like they can relate to one character.

Rick, for example, as the central character, is framed by the camera in particular ways, and events are often seen through his eyes. A brief series of shots introduces Rick and is designed to align the viewer’s consciousness to his.

First his hand is seen signing an advance slip; the shot is positioned so that it appears that a (right-handed) person in the audience is reaching up to the screen to sign the slip. Then the camera pans up to his expressionless face as he drags on a cigarette; he is playing a solitary game of chess while monitoring activities in the casino.

Moments later, when he confronts a pompous German who has been denied entry, his whole body emerges from the viewer’s space as he walks into the frame.

Presumably the director, Michael Curtiz, felt the need positively to persuade viewers to identify with Rick because he is not immediately likeable or worthy of admiration, in contrast to resistance leader Victor Laszlo, a more attractive heroic character who consistently articulates anti-Nazi sentiments. Also, as the story centres on Rick’s redemption from unmediated self-interest to active involvement in the Allied cause, and most of what happens takes its logic from Rick’s point of view, Curtiz wanted to discourage the audience from having to make a choice between Rick and Laszlo.

Within the opening shots of ‘Casablanca’ one can see how it conforms to the basic principles of Classical Hollywood Narrative structure. At the film’s beginning, the credits are displayed over a political map of Africa. In the first five minutes of footage, a few details are told to the audience in the form of a voice-over, explaining the Nazi takeover of Europe, the coming of World War II, and the political refugees fleeing Hitler. A trail is also drawn upon this map of the route these refugees take, leading to ‘Casablanca’, where the story is set. This narration allows for an easy following from its audience. There is nothing that they need to figure out themselves, it is simple and allows the story to develop.

One can establish that the story is beginning in a chronological order, showing what is happening within the world, and where it is leading, to allow the audience to establish the reasons for what is happening between the characters later within the film. However this chronological order is momentarily abandoned during the flashback to the time when Rick and his lover were together in France, before the war broke them apart. Even though this flashback presents a slight break in the chronological order of the Classical Hollywood form, it also allows the audience to grasp the story behind these two characters, putting the pieces of their love story together so that the audience is not too confused at why they are attracted to each other and have so much history.

The film is set in Casablanca, Morocco in the early days of the Second World War. Morocco was a French Colony up until 1956. In a geographical sense, the choice of Casablanca as a setting is essential to the way that the narrative develops, as all the characters are, in a sense, visitors there. Casablanca’s connection to France, but geographical distance, means that the representatives of Vichy France, the Resistance, and the Nazi Party behave in ways that would not have been possible in, for example, occupied France. Here these groups are forced to co-exist, resulting in moments of tension and danger for our characters.

Casablanca is shown as a waiting port for refugees fleeing Nazi occupied Europe and who hope to settle in democratic countries. The waiting appears to last an eternity, Casablanca while apparently a place of hope essentially offers us a pessimistic outlook as very few people actually gain the coveted exit visas. Only those wealthy enough or those willing to compromise their moral integrity manage to escape Casablanca.

Corruption is endemic in Casablanca; this in a way embodies the setting of the film. Captain Renault embraces this corruption as it affords him personal and financial favours. He describes himself as a ‘poor corrupt official’. This further adds to our pessimistic outlook of Casablanca.

A further aspect of the setting which adds to our pessimistic outlook is the apparent worthless value of human life in Casablanca. It is a divided world, corrupt and conflict ridden that has essentially a negative outlook.

The spotlight that shines from a tall tower and lights up the city of Casablanca reminds people that they are always being watched. The spotlight is a constant presence at Rick’s, regularly circling past the front doors. The spotlight first swings past the doors immediately after Louis has assured Strasser that the murderer of the German couriers will be found at Rick’s, as if to stress the relationship between government authority and the invasive, spying light. The spotlight crosses Laszlo’s path as he leaves Rick’s with Ilsa, underscoring the fragility of Laszlo’s safety and the fact that he is constantly being watched. Later that evening, Ilsa returns to Rick’s and opens the front door just as the spotlight passes by, backlighting her brilliantly in the doorframe. This dramatic image is important for several reasons.

First, it marks the first time the light actually pierces the front doors and enters Rick’s. The image also makes Ilsa look like an angel, and lets us see her as her lovers see her. The use of light here is also a meta-filmic comment about the artificiality of the cinematic lighting. The spotlight reappears as Rick gazes out his window after he and Ilsa kiss in his apartment. Even Rick and Ilsa’s romance, the device suggests, is being watched, and the war has completely altered the conditions of their love. This change could partly explain Rick’s self-sacrifice at the end of the film. In order for Ilsa to escape the eye of the spotlight, Rick realizes, he must let her escape to America.

The motif of money is seen throughout the film. Money is associated with corruption. This is evidenced by the fact that Rick allows Captain Renault to win at roulette. Furthermore only those with enough money can escape Casablanca. The desire for money leads people to take huge risks, such as the one taken by the young Bulgarian couple as they gamble with their future in an attempt to gather enough money to escape. A gamble they would surely have lost only for Rick’s intervention.

As viewers we ‘read’ films using our understanding of film language and the following film codes: Visual (Image); Oral (Dialogue); Aural (Sound); Symbol (Props, Costume, Colour, Interior/Exterior etc). One of ‘Casablanca’s’ strengths is its, cynical dialogue replete with recognisable one-liners. There are basically two types of dialogue used in screenplay. It is either direct or sub-textual. In ‘CAS’ we learn about Rick in two ways. First he acts cold, cynical and distant.

When Ugarte is in a panic and comes to Rick for help, Rick is heartless and refuses. We learn a lot about Rick from such actions. Later Rick reveals more about himself when he says, ‘I stick my neck out for nobody’. Never does he say he is a cynical man with a broken heart. We observe his behaviour and listen to what he says and form our opinion based on this.

The Hollywood studios want their films to be entertaining. So while the plot and sub plot is developing there is a moment of light comic relief. While the camera follows one line of action, it stops to eves drop on a comic relationship between a French and Italian officer. Furthermore Louis and Ricks relationship is layered with quips that reveal the cynicism of these two men who deep down are very loyal to the cause against the Nazis

The musical score of Max Steiner is considered to be a classic. The music underlines and indicates the emotional state the audience should be in. The combination of diegetic and non-diegetic music in the film produces a powerful emotional state that speaks to the romance, memory sense and patriotic fervour of Casablanca, ‘As Time Goes By’ and ‘La Marseilles’ are examples of this. 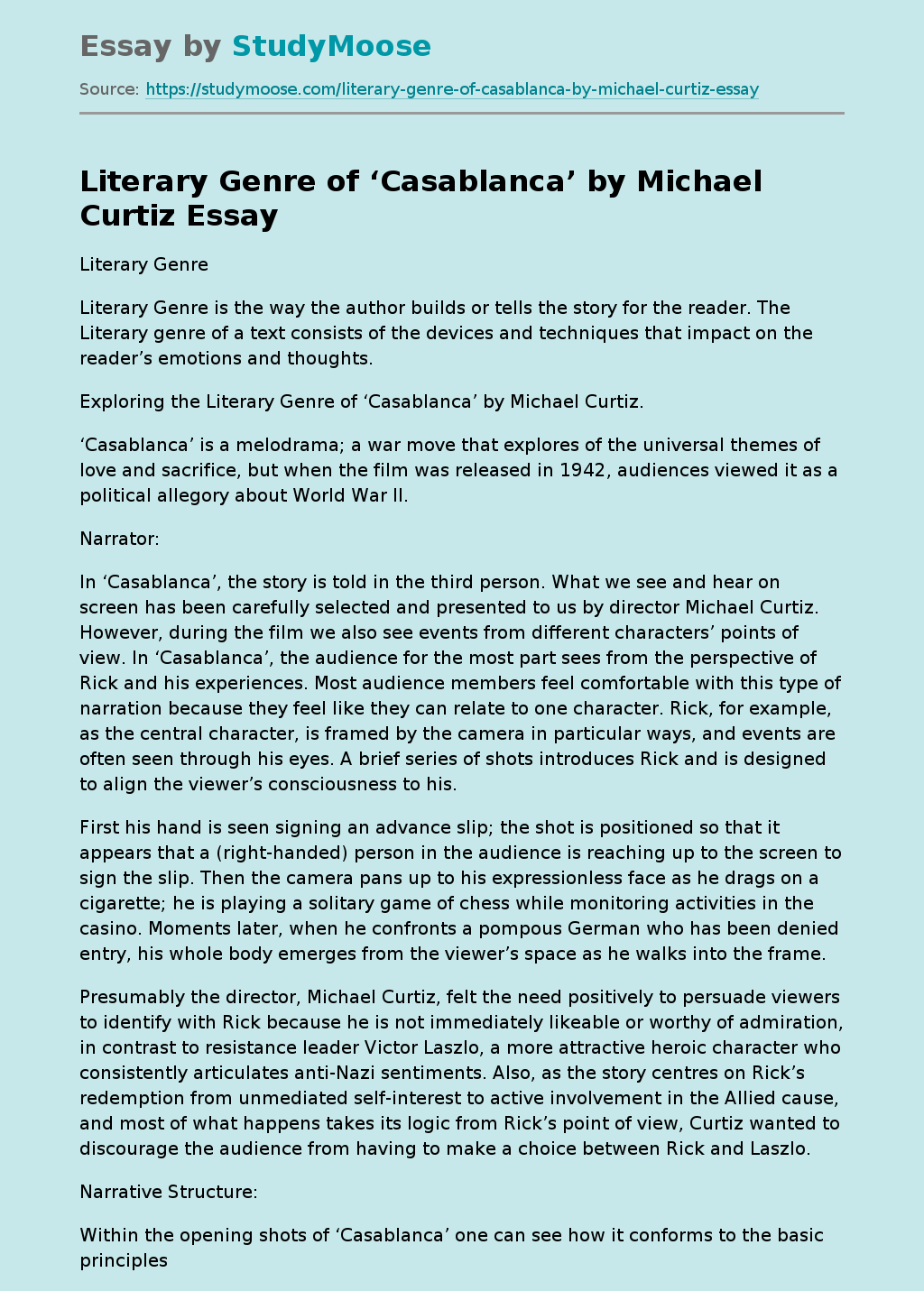