Montessori was born in Ancona, Italy. Her father, Alessandro Montessori, 33 years old at the time, was an official of the Ministry of Finance. Her mother, Renilde Stoppani, 25 years old, was well educated for the times and was probably related to Italian geologist and paleontologist. While she did not have any particular mentor, she was very close to her mother who readily encouraged her. She also had a loving relationship with her father, although he disagreed with her choice to continue her education.

Don't use plagiarized sources.
Get Your Custom Essay on Life & Work of Dr. Maria Montessori Just from $13,9/Page

Maria herself proved remarkably talented. She was a confident and strong-minded lady who excelled in school by the role of leader in different games and conversations. At the age of thirteen she got admission in a technical school, a thing considered off-limits to females at that time. She scored high marks that when she graduated, in 1886; she was able to enter in the Regio Istituto Tecnico Leonardo da Vinci. Here she studied math, natural sciences, and languages, again excelling beyond all expectations.

It was here too that she became fascinated with the biological sciences, and began to dream of pursuing a career in medicine. Despite her gender, she was allowed to study medicine.

When she presented her thesis in 1896, her absolute brilliance so impressed the all-male board of review that they awarded her a medical degree, making her Italy’s first woman doctor. After this accomplishment she was promoted to surgical assistant at Santo Spirito, where she had worked previously as medical assistant. As a physician, Montessori specialized in pediatrics and the new field of psychiatry. She continued research at the University of Rome, joining the university staff in 1897. She became interested in psychology and human behavior, and in 1900, at the elapse of just a short span of four years after her degree in medicine, she accepted a professorship in anthropology at the University of Rome.

After accepting a professorship in anthropology, Montessori researched & worked on so-called “phrenasthenic” children—in modern terms, children experiencing some form of mental retardation, illness, or disability. She also began to travel, study, speak, and publish nationally and internationally, coming to prominence as an advocate for women’s rights and education for mentally disabled children. In Rome during this time, children who were considered mentally deficient were sending in asylums. Montessori’s early observations of these asylum children formed a crucial element of her theory that would later influence many people. She observed children who use to crawl on the floor to grab crumbs of bread after mealtime and realized that “not all children developed through phases of life in the same way.” Her initial focus was to rehabilitate mentally retarded children, with behavioral problems, orphans, and the desperately poor.

Montessori’s early efforts were so surprisingly successful that she soon had a large following, not only of parents desperate for her help, but of teachers desperate to learn her methods. Montessori was much influenced by the earlier work on child development and psychology, in particular research conducted by Jean-Marc-Gaspard Itard and Edouard Seguin. Their experiments & research were a source of inspiration for Montessori who believed that “mental deficiency presented chiefly a pedagogical, rather than mainly a medical problem”.

Satisfied with the fact that so-called “mentally deficient” children could learn the same things as normal children, sometimes at a faster pace or by attaining a higher mastery level, Montessori began to focus on working directly with normal children in the field of education. The opportunity to work with normal children came to her in 1907, when she was offered the position of a medical director for a day-care center that was being organized for working-class children who were too young to attend public schools.

The 1st day-care center, named Casa dei Bambini (House of Children) was located in the worst slum district San Lorenzo in Rome on January 6, 1907, & the conditions Montessori faced were atrocious. Its purpose was to provide a space for pre-school age children who were damaging and destroying the houses while their parents were at work. Montessori believed in taking the time to learn from the children, as she herself learned through her observations of the children in the asylums. As Montessori herself wrote, “I merely wanted to study the children’s reactions. I asked not to interfere with them in any way as otherwise I would not be able to observe them.” Montessori surprised when she saw children’s lack of interest in the toys or the drawing materials and their keen interest in the educational materials. Each educational material had some carefully planned objective that was pre-determined by Montessori. “Liberty of the pupil” was fundamental method according to her.

The spread of Montessori education in Italy

The first Casa dei Bambini was a success, and a second was opened on April 7, 1907. The children in her programs continued to exhibit concentration, attention, and spontaneous self-discipline and the classrooms began to attract the attention of prominent educators, journalists, and public figures. Three more Case dei Bambini opened in 1908, and in 1909 Italian Switzerland began to replace Froebellian methods with Montessori in orphanages and kindergartens.

As early as 1909, Montessori’s work began to attract the attention of international observers and visitors. Her work was widely published internationally, and spread rapidly. By the end of 1911, Montessori education had been officially adopted in public schools in Italy and Switzerland, and was planned for the United Kingdom. By 1912, Montessori schools had opened in Paris and many other Western European cities, and were planned for Argentina, Australia, China, India, Japan, Korea, Mexico, Switzerland, Syria, the United States, and New Zealand. Public programs in London, Johannesburg, Rome, and Stockholm had adopted the method in their school systems. Montessori societies were founded in the United States as AMI (the Montessori American Committee) and the United Kingdom (the Montessori Society for the United Kingdom).

Maria Montessori’s writings were also being translated to different languages. She was continually giving lectures around the world where she is always welcomed. She also continued her research and application of her principles to school aged and preschool aged children as well as infants from birth. Her research about the child’s early years is written in “Absorbent Mind” (1949). Alternatively she also took notice of the social possibilities based on the idea that “true education is an armament of peace”. In 1939 she flew to India where she met Mahatma Gandhi.

In 1949 she addressed UNESCO where she received an ovation. She was honored with the Legione d’Honneur and received an honorary of Doctor of Philosophy from the University of Amsterdam.

Montessori truly deserved and referred to as a lady much ahead of her time. She was a true pioneer of a modern education system. She was honored by many countries with royal, civic and academic awards and was nominated three times for the Nobel Peace Prize in 1949, 1950 and 1951. Regarding her work and efforts in educational sector her picture was on Italian 200 lire coin and in 1990 on the 1000 lire bill.

Maria Montessori died in the Netherlands on May 6, 1952 aged 81. Her name always lives through the method of teaching that she introduced because she said once that, “I did not invent a method of education, I simply gave some little children a chance to live”. She was truly a woman ahead of her time. 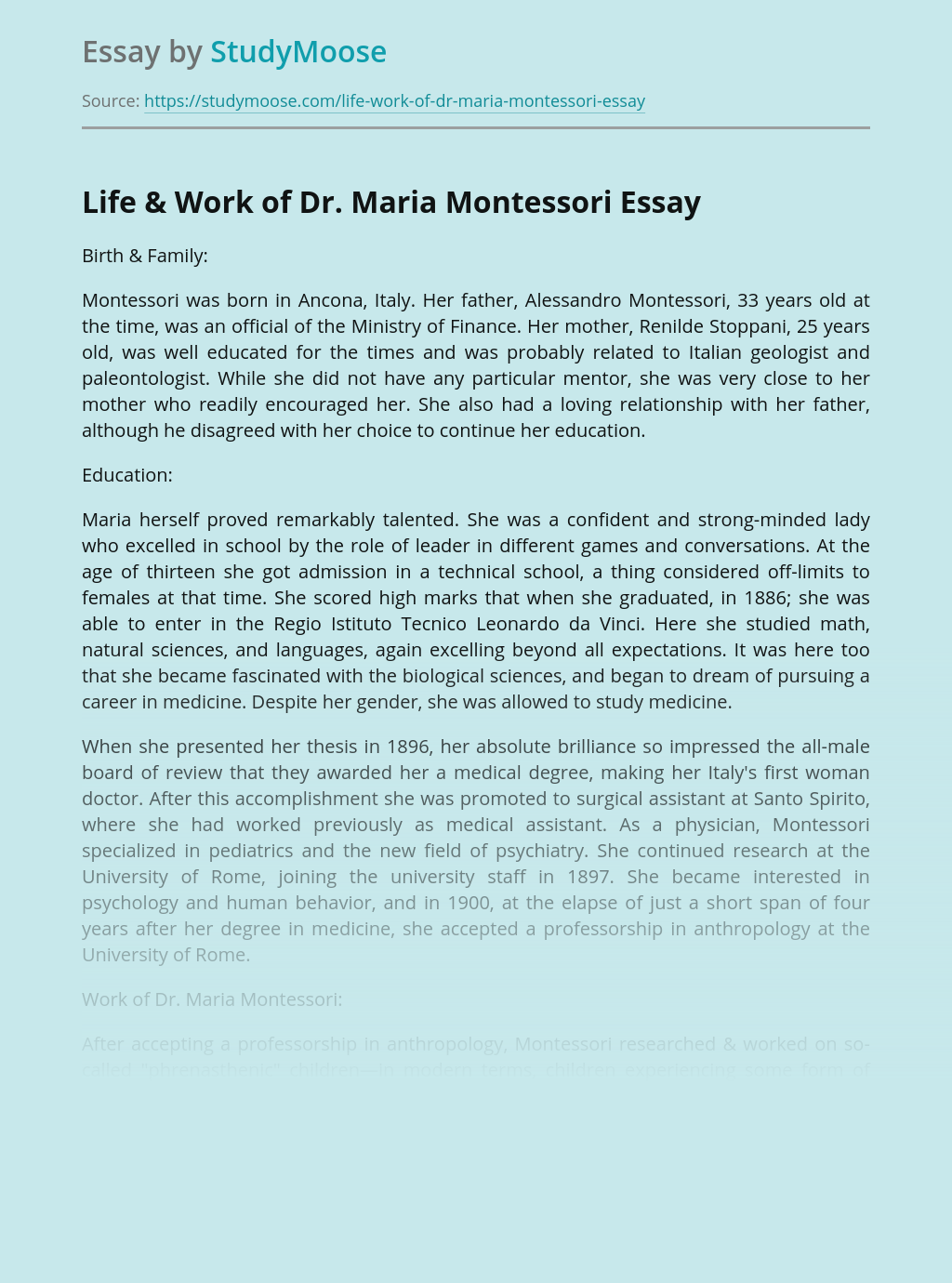 How important are parents in a child's life?

Parents How important are parents in a child’s life? In my opinion, parents are extremely important in the raising of a child. Without the presence of a parent, a child will have a very difficult time growing up. There are essential things that a child has to be provided with. Those needs, I classified them...

Get Essay
The biggest change in my life

Moving to the United States from Dalat, Vietnam was a dramatic experience that has impacted my life in many different ways. My family immigrated to a new country hoping for a better future. I had spent fourteen years of my childhood in Vietnam only to tear away from my relatives, friends and home to start...

In “War” by Luigi Pirandello, the author writes about peoples’ reaction to war though the eyes of the main characters. The setting of the story takes place in Europe, in a stuffy and smoke filled second-class train carriage. The main characters, a bulky woman-almost like a shapeless bundle-and a fat, red faced man among others,...