The definition of a person’s lifespan is from the moment that they are conceived to the moment that they pass away. The development of this life is defined through the various stages in which that person develops. When a person is looking at the perspective of this lifespan development, they are trying to understand what changes during the development and why it happens. There have been many psychologists that have looked at this and developed many different theories about development, and you can see that there are many influences that help push these theories into reality.

Don't use plagiarized sources. Get your custom essay on
“ Definition of Lifespan Development ”
Get custom paper
NEW! smart matching with writer

Definition of Lifespan Development A person and their lifespan start out when they are conceived and then grow and develop for nine months in the womb. During this time that person will develop into either a male or a female. Once they are born they will continue to experience changes and different developments while they age. There are different stages in their life that will show different changes within them.

The study of how we understand how humans change over a lifetime is called the study of human development, (Berger, 2008).

These domains are physical, cognitive, and social domains. Physical domain is looking into the aging and growth of the physical being, (Sigelman & Rider, 2009).

The cognitive domain looks into the mind and examines memory, language, perception, and problem solving. The last domain looks at the person’s personality, emotions, and relationships. This study of the human development is one that will probably never end, since there are so many factors when looking at the development of a person. Theories There have been many different theories that go into this portion of psychology. With these theories, people need to examine what are actually in these theories before trying to understand what lifespan development actually is.

Piaget Piaget’s theory on development puts a lot of emphasis on the development of thought process. His cognitive theory has been in the front of this study since the 1980s and has had many different versions formed from it, (Berger, 2008). He had figured out that since children are so curious that there are age related stages to the development of the mind. Piaget put these into four different stages. The stages are sensorimotor, preoperational, concrete operational, and formal operational.

With this theory the interpretation of an adult would be a constant struggle in the person’s unconscious from childhood on up. Nature and Nurture There have been many debates over the influence of nature and nurture in this field. When looking at this field a person can see that there is help from both influences when shaping the development of a person. Nature is where genetics is passed down from one person to the next and nature is a person’s abilities and temperaments, (Guest, 2011). Everything that is around a person can affect their development, such as friends, schools, and religion.

Each of these takes most effect when the child is in early development, which is one of the most crucial times for a person and their development. Conclusion The development of a person from life to death is the scientific study of lifespan development. This perspective can be seen in three different domains and five different stages of characteristics. There were many different theories on this subject, but Piaget thought there were four stages that happened in the mind while Freud thought there were three stages that was focused on sexuality. 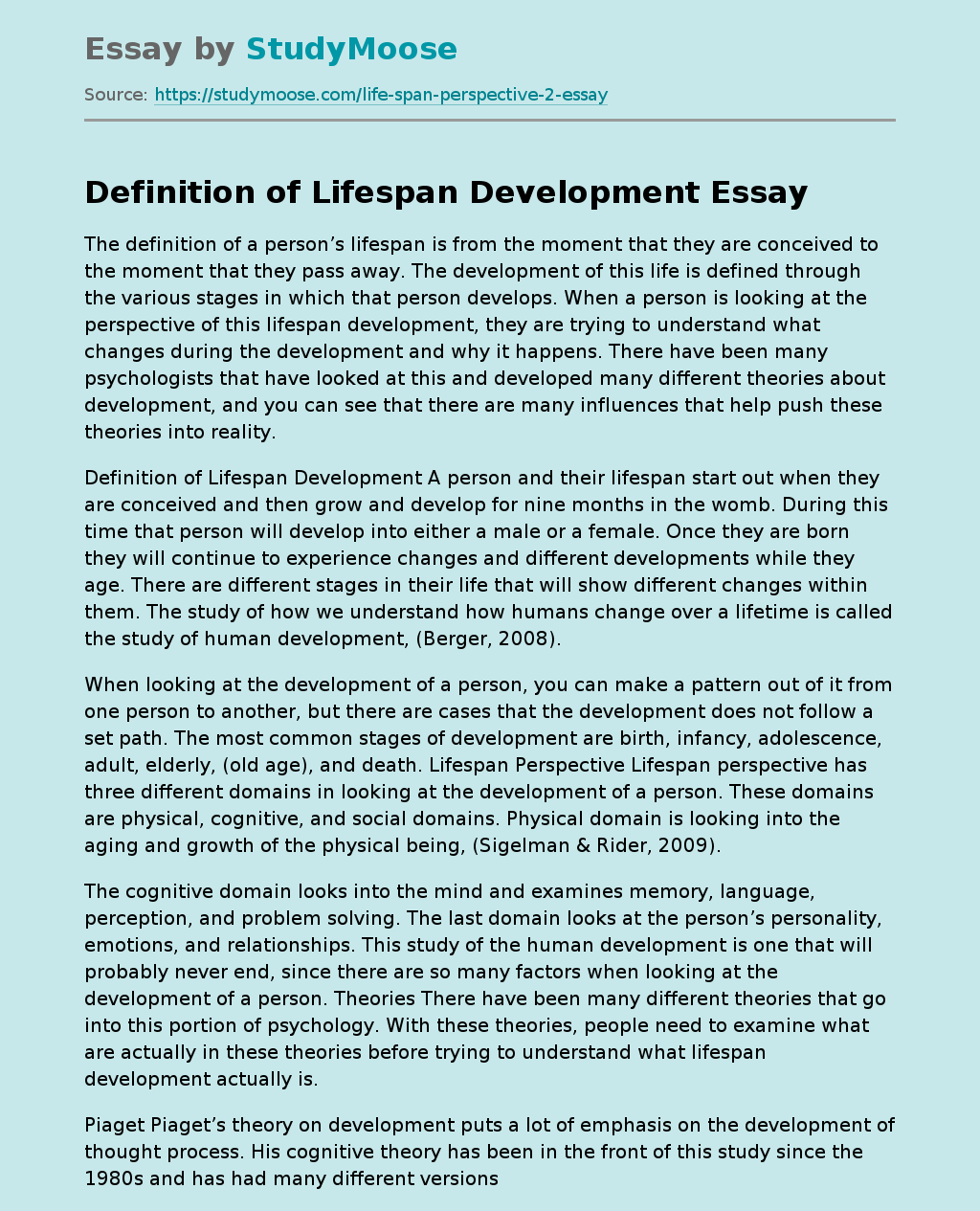