A lot of debate has been conducted regarding the legalization of marijuana, with an unusual amount of contradicting research. There are many views to consider, whether it’s being argued from a medical, political, or economical perspective it always come down to the personal motives of the debater. Together we will explore the pros and cons of recreational marijuana use in NY state. Further we will establish the query should recreational marijuana use be legal in NY state.

Medical marijuana is important to a lot of people who need it.

Don't use plagiarized sources. Get your custom essay on
“ Legalizing Marijuana Research ”
Get custom paper
NEW! smart matching with writer

According to a Discovery Health article, ‘marijuana has been extremely successful in relieving nausea, which is good news for cancer patients suffering from nausea as a side effect of chemotherapy’. The drug also helps people who have loss of appetite due to diseases such as HIV/AIDS. It is also useful as a sleep aid, and helps relax muscle tension, spasms and chronic pain. Glaucoma patients as well as epilepsy patients also benefit from the use of marijuana.

The CBD in marijuana is also used in lotions, drinks, and used to help pet’s anxiety, and pain.

Regulated adult marijuana use can be beneficial to the state. Taxes from the legal sale of marijuana can help fund many important public programs. (Hamilton) Legalizing marijuana would end costly enforcement of marijuana laws and free up police resources. As far as safety, legal marijuana would be regulated for consumers. People buying marijuana on the street have no way of knowing if what they’re ingesting is covered with mold, fungus, pesticides, or other harmful substances.

(Barmann) If marijuana is legalized, the government can enforce laboratory testing and regulations to ensure that marijuana is free of toxins, (APHA) and possibly shut down some drug cartels, and street gangs.

Marijuana is less harmful than alcohol and tobacco, which are already legal. Alcohol and tobacco are legal, yet they are known to cause cancer, heart failure, liver damage, and more. According to the Centers for Disease Control and Prevention ‘Alcohol Poisoning Deaths, ‘ six people die from alcohol poisoning every day from excessive alcohol use in the United States. Drug Enforcement Administration, ‘Drug Fact Sheet: Marijuana, ‘ states ‘There are no recorded cases of death from anyone overdosing on marijuana’. A national poll found that people view tobacco as a greater threat to health than marijuana by a margin of four to one (76% vs. 18%), and 72% of people surveyed believed that regular use of alcohol was more dangerous than marijuana use. (Marist Poll, ‘Yahoo News/Marist Poll: Weed & The American Family’)

There is much to be heard concerning counter arguments to the legalization of marijuana. For example, a common argument is its morally wrong to get high’. The people who say this may not realize morals vary from person to person, and no one has the right to enforce morals onto another. Another argument is legalizing marijuana will increase use in teens. According to the National Survey on Drug Use and Health. ‘Colorado teens between 12 and 17 years old reported a nearly 12% drop in marijuana use just two years after adult use was legalized’. Then there is the classic marijuana is addictive’ which is true but not in the way implied. Marijuana is not physically addictive like cigarettes, you can get psychologically addicted to marijuana the same way you can get addicted to food, sex, or any other thing in life. (Josh) 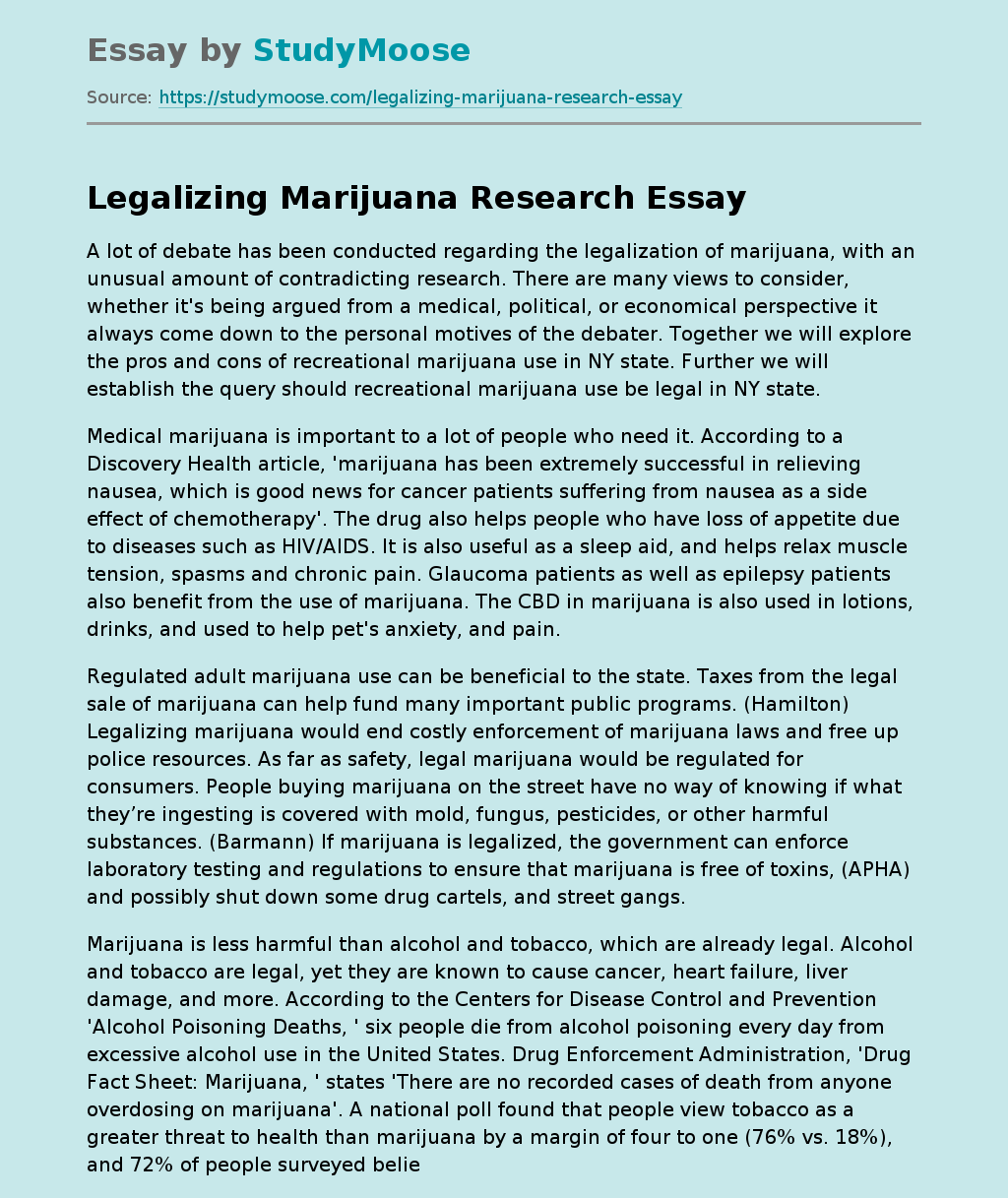