Have you ever been on top of a large building and were too afraid to look over the side? Have you ever climbed a really tall tree and were too afraid to climb down? I have, when I was younger I climbed a really tall tree and when I got to the top I looked down, I was too afraid to climb back down. What I was experiencing was a fear of heights know as acrophobia. Acrophobia (n.d.) according to Merriam-Webster Dictionary, is an abnormal dread of being in a high place: fear of heights.

Don't use plagiarized sources.
Get Your Custom Essay on Learning experience paper acrophobia Just from $13,9/Page

I believe that most people become a little scared when it comes to heights. There is nothing wrong with having acrophobia to an extent. It is a defense mechanism our bodies use to stop us from walking off cliffs. The problem is when a natural instinct becomes paranoia. For example, someone who has acrophobia would be scared, nervous, and or panic inside a safe environment like a skyscraper.

There are many symptoms of the fear of heights (acrophobia) that may occur when up on a tall building or high place. Many people with acrophobia can become dizzy, excessive sweating, nausea, sick to their stomachs, shaking, dry mouth, and unable to speak. One of the main symptoms of acrophobia is fear of dying. Some of these symptoms can then turn into a full blown anxiety attack. “Discomfort anxiety tends to be specific to certain uncomfortable or dangerous situations- and consequently shows up in such phobias as fear of heights” (Ellis, 2003, p.83). It is only believed that between 2 and 5 percent of the world’s population actually suffers from acrophobia, and that twice as many woman are affected by acrophobia then men. A common misconception with the fear of heights is people calling it vertigo. Vertigo happens to people when they are on a tall building and look down from the top. Vertigo is a sensation that causes a person to feel like they are spinning even though they are not. So even though vertigo occurs to a lot of people when they high in the air, it does not mean they are afraid of heights. Some Causes

What causes people to become afraid of heights? Some psychologist believe that the fear of heights enters your life from something that happened in your past. Psychologist believe that it is caused by some emotional trauma that has to do with heights. For example a person who is suffering from acrophobia may have fallen out of a tall tree when they were little. It is also believed that this condition can be triggered by trauma seen in a movie, television, or a real life event involving another person that has to do with heights.

Research and Studies
There has been some research done on the fear of heights. Psychologists by the name of Gibson and Walk did an experiment in 1960 called “Visual Cliff”. The “Visual Cliff” experiment was an experiment to see if babies who were still crawling would cross a thick piece of glass that covered a steep drop off. They then put the mother on the other side of the drop off to call the baby over to the other side. Even with the mother calling the crawling babies to come to them, the babies still did not cross over the glass. This experiment shows that most humans if not all humans have acrophobia at least partially ingrained in our genetics. I believe this is part of our survival instincts. The Cure

Many people who are suffering from acrophobia are often prescribed medications to help them out with their fear of heights. Medications will not actually cure someone of their fears it only masks them. In some cases the side effects of the drugs may be worse than a fear of heights. One of the best treatments for acrophobia is cognitive behavior therapy. Cognitive behavior therapy involves exposing a person to heights and helping them develop coping skills that will help them increase their confidence and change their thought process towards heights. How I would go about my fear of heights is by actually facing my fears. I would take baby steps when facing this fear. I would find a tall building, I would go to the top of it, and I would then would walk as close to the edge as I could before the fear overcomes me. I would then mark that spot on the ground, I would then come back the next day and take 1 step closer. I would keep that up each day until I get to the edge, and each day I would tell myself to trust my body and building there is nothing to be afraid of. I believe this would be the best approach for me to overcome my fear of heights. Conclusion

Suffering from acrophobia can be something that is hard for a person to deal with. I do believe that we all have a fear of heights, it may be very minute but I do believe we all have it. I think the only way to cure a phobia or fear is to face them. I personally know facing fears is very hard to do but once I overcome the fear it was an incredible feeling. 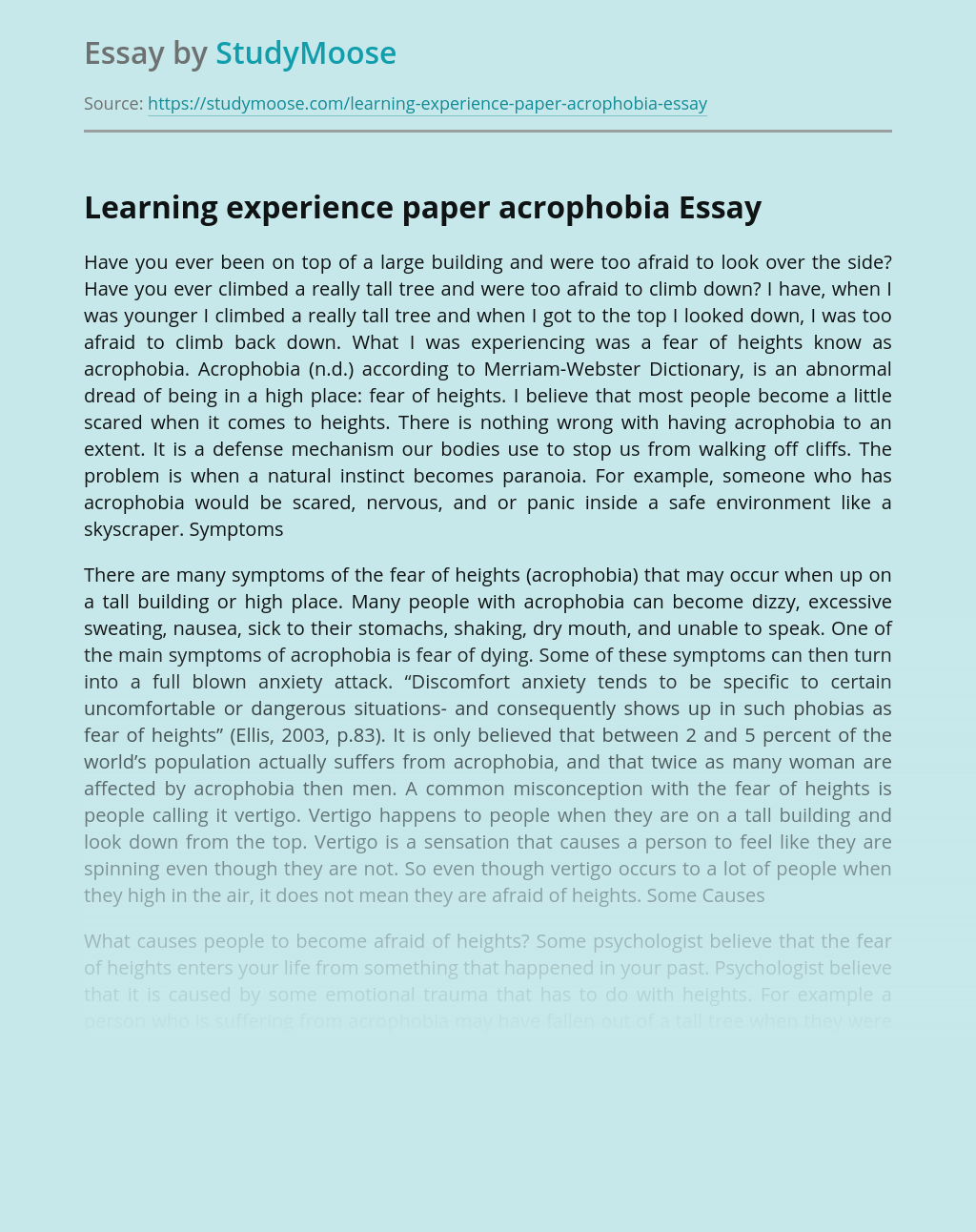 Knowing and teaching a language can be considered by numerous as an extremely tough and demanding job due to what the procedure itself implies. Could you think of how each language student feels when he/ she is asked to perform an activity or just to speak in front of the class? A few of them...

Get Essay
The things I carry

As usually every day of my life I must carry something in my wallet in somewhere of my bag, they might be some utensils, as an eraser, books, etc. But among the most important things I carry with me are those things, which I keep a great respect, or some things that their value have...

﻿About a Boy- Marcus

In this essay, I will be talking about how Marcus is represented in Chapters one to twenty. Throughout the novel, we see many changes within Marcus and we really see how vulnerable he is. We also know that his mum has a huge influence on him and that he is severely bullied because of this....

The meaning of the term culture in nursing has changed significantly in recent decades. Culture may be seen as the learned, shared value and beliefs of a particular group (Spence, 2001). Cultural expression assumes many forms, including language, traditions, stress, pain, anger, sorrow, spirituality, decision making and even world philosophy (Catalano, 2006).Cultural safety is a...