Last of the Mohicans

The story of the Last Mohicans is about war stories, adventure, frontier romance, pioneer life and racism. The novel is a historical fiction that takes place during the third year of the Indian and French war in 1755-1763. Indians play a very significant role in Indian and French since some of them became the French ally to help them explore the wild forest frontier of western New York. The story though didn’t focus much on the detailed events of the French and Indian War, but on the consequences of the interracial friendship and romance, revenge, nature and combat scenes in the wilderness.

Don't use plagiarized sources. Get your custom essay on
“ Last of the Mohicans ”
Get custom paper
NEW! smart matching with writer

Cooper emphasizes the tensions between nature and culture, between nature and man and between the Whites and Native Indians. To clearly understand how Cooper portrayed the Indians, it’s important to know some of the characters that significantly revealed the real nature of Indians and how they are treated in the story. Cooper’s novel is basically about race and how the character overcomes and treated the racial segregation.

Proficient in: Last of The Mohicans

It is a story of Indians and Americans who believes in social and class status. In the story of the Last of the Mohicans, racial tensions are evident.

In the beginning of the story, Indians were portrayed as natives who have vast familiarity with the terrain. The Indians expertise in the wilderness is portrayed by the character of Magua, an Indian of the Huron tribe who has a sharp understanding of white’s prejudices against the coloured descent. Uncan is another Indian character of the story, he is the youngest and last member of the Indian tribe known as the Mohicans.

He later on fell in love with Cora, a white woman. Uncan courageously pushes the limits of interracial relationships.

Chingachgook, Unca’s father also portrays the usual character of a native Indian because of his crafty and cunning intelligence who inhabits the forest for the longest time. Chingachgook in Chapter three interpreted that the reason of racial inequality is because of white’s interpretation of their “red skin” as the absence of intelligence. Though Cooper presented in the story that Indians can not operate white men’s rifle but it is evident how the fierceness of Indian’s handmade weapons became more powerful in the combat battles.

In order to understand better how Cooper perceive and how he presented Indians, it is important to learn the character and disposition of the novel’s frontier hero named Hawkeye. He lives in the forest and share close bonds with some of the Indians especially with Uncas and Chingachgook. Though he was the main protagonist in the novel, he has a disturbing contradictory opinion about nature and race. In terms of friendship, he judge people by their principle and individuality. He obviously supports interracial friendship between whites and red but he opposes interracial romantic relationships between men and women.

One of the quotations that support his racism is during his conversation in Chapter three with Magua. “I am not a prejudiced man, nor one who vaunts himself on his natural privileges, though the worst enemy I have on earth, and he is an Iroquois, daren’t deny that I am genuine white” (Cooper, 1804). In this sentence, he asserts that he does not discriminate but he will injure any man that will judge him of having mixed parentage. Hawkeye always asserts his genuine whiteness with his long rifle which symbolizes the European superiority in war materials.

Cooper is likely to convey that any white, even the noblest and most sensitive man will be proud to be white in front of whatever race whether it’s white’s opponent. Another evident that supports Hawkeye racism is when he perceived Magua initially as a bad man without meeting the Indian yet. He based his judgment based on prejudice not on experience. “A Mingo is a Mingo, and God having made him so, neither the Mohawks nor any other tribe can alter him” (Cooper, 1804). Hawkeye like any other white men perceives Indians as horrible creatures basing on race.

Though Cooper dislikes Hawkeye’s racisms, he made plots that justify that racism. The character of Major Duncan Heyward can be analyzed as well as to how Cooper presented the Indians in a way that will overlook the treatment about racism. A noble and conventional white man Heyward fell in love with Alice, half sister of Cora who is pure American. His love is pure for Munro’s daughter is pure but Munro suspected Heyward’s purity of love for Alice. Munro accused Heyward for racism since he chooses Alice over Cora. At the beginning, Munro was aware in the timid affection of Heyward and Cora.

It is impossible according to Munro that Heyward fell in love with Alice instead of Cora since Alice is portrayed as vulnerable and weak and Cora as a noble and strong woman. It is because Cora is partly “negro”? In any way the colour corresponds to their fate. The concept of the interracial love and friendship are appealing, desirable but dangerous and destructive. Cooper through shared communion and friendship of Hawkeye between Uncas and Chingachgook is conveyed desirable. Their team up enabled them to save white military leaders against villains.

However the interracial love of Uncas and Cora ends in tragedy and the forced interracial relationship of Magua and Cora are portrayed as unnatural (“The Last of the Mohicans”). Though it can be interpreted that Cora’s affection for both Indians is inherited since her mother was Indian, Cooper still presented the reality that interracial romance will lead to difficulties and eventually disaster. Cora despite her hybridity is still considered white. Magua opposition to Uncas both started with Cora, the white woman. However, Cooper gave a different perspective for both characters.

Uncas pushes the limits of interracial romantic relationship and faced the unique challenges. Cooper suggests in the series of events that interracial relationship is difficult and perhaps doomed. The complication of interracial romance of Uncas and Cora is natural and passionate that can be happier mix culture in the future but it is doomed to tragedy. Magua on the other hand, seeks to win Cora as part of his revenge because of his exile by Colonel Munro. He is aware of white’s prejudices against the coloured descent and he knows that threatening to marry the colonel’s daughter will threaten the whites.

The white feared interracial marriage and interracial sexual contact. The persistent and violent advances of Magua to Cora and his dangerous combat to Uncas Hawkeye show an exaggerated fulfilment for white men’s fears. Though latter in the story, Cooper puts a complication on Magua’s intentions since Magua unconsciously develops affection with colonel’s daughter. Magua’s anger initially shows how hostile Indians are that daunts the white for their prejudices. The seemingly unending combats in the novel underlie racial tensions.

The adventure story full of battles, captures and rescues showcases Indians’ expertise in the wilderness which is used in their own advantage. Their crafty intelligence in the woods shows their attachment and loyalty to their own civilization. Magua personifies the typical fierce and dangerous Indian but Uncas and his father is admired not because they are Indians but because of their individuality. He is motivated by revenge and created constant threat in the story. But he is a well defined character that represents the evil Indian.

The scene in the village of the Hurons again manifested Indian’s expertise in the Wilderness. In the story with Magua and Uncas opposition, there became divided loyalties between the Indians which ended something sad and tragic. Both have different motivations. Magua is motivated by revenge against the white’s prejudices but Uncas is motivated by his noble individuality by his love to Cora and to save other whites, Alice and Heyward. As a consequence, both Indians became enemies. They can actually join forces against the white to stop the possibility of their extinction.

However, Cooper presented bad (Magua) and good (Uncas) Indians that will justify white’s notion about Indians through Magua’s character and the protagonists’ belief in individuality not race through Uncas’s character. In the latter part of the story with Magua’s confrontation with the Delawares when the white invaders are already winning, Indians slowly feared dispossession of sustenance and existence. Cooper presented Indian against conquest, possibility of extinction and dispossession. With the death of Uncas as the last Mohican, his race is decimated.

Finally with Magua’s death the narrative action in the wilderness ends. In the story, Cooper manifested the changing idea of family and culture. Uncas and Hawkeye for example, adapted easily to the makeshift family structure. Uncas and Hawkeye even though they came from two opposing race manage to form a family and communion that transcends race. The intersection of nature and culture or the intersection of two races created difficulties with other characters but not with Uncas and Hawkeye who judge each other not through race but independence of character.

The title itself “Last of the Mohicans” symbolizes the death of the native Indian Culture in the encroaching approach of European civilization. The death of Uncas particularly laments the end of the Mohicans civilization. The title itself determines the ultimate tragedy of the novel’s plot. The novel was fruitful contribution to still remember that once in American frontier; there came an ancient civilization that must be saluted with their expertise in the wilderness and pioneer life.

The story of Cooper is non fiction but the characters were created in the novel especially the Indian tribes has historical context. Though the land itself where the setting took place is as dangerous as the Indian tribes but Cooper also highlighted and justified the good sides of the natives. The setting is in the woods that fills Indian tribes. Their expertise in conventional battle in the wilderness fits their potential. The setting and nature conveys that the story is to introduce the native Indians.

When the whites came, Cooper through the characters he created contributes to the depiction on how Indians are treated outside the Frontier. The novel also showcases the weakness of the Europeans in their lack of understanding in the dangerous forest. At the very beginning, whites were expressive that they need Indians’ expertise to invade the land. Indians are fierce and dangerous though but it is for them to continue their legacy and civilization. Their keen awareness of racism made them defensive.

Last of the Mohicans. (2020, Jun 02). Retrieved from http://studymoose.com/last-of-the-mohicans-essay 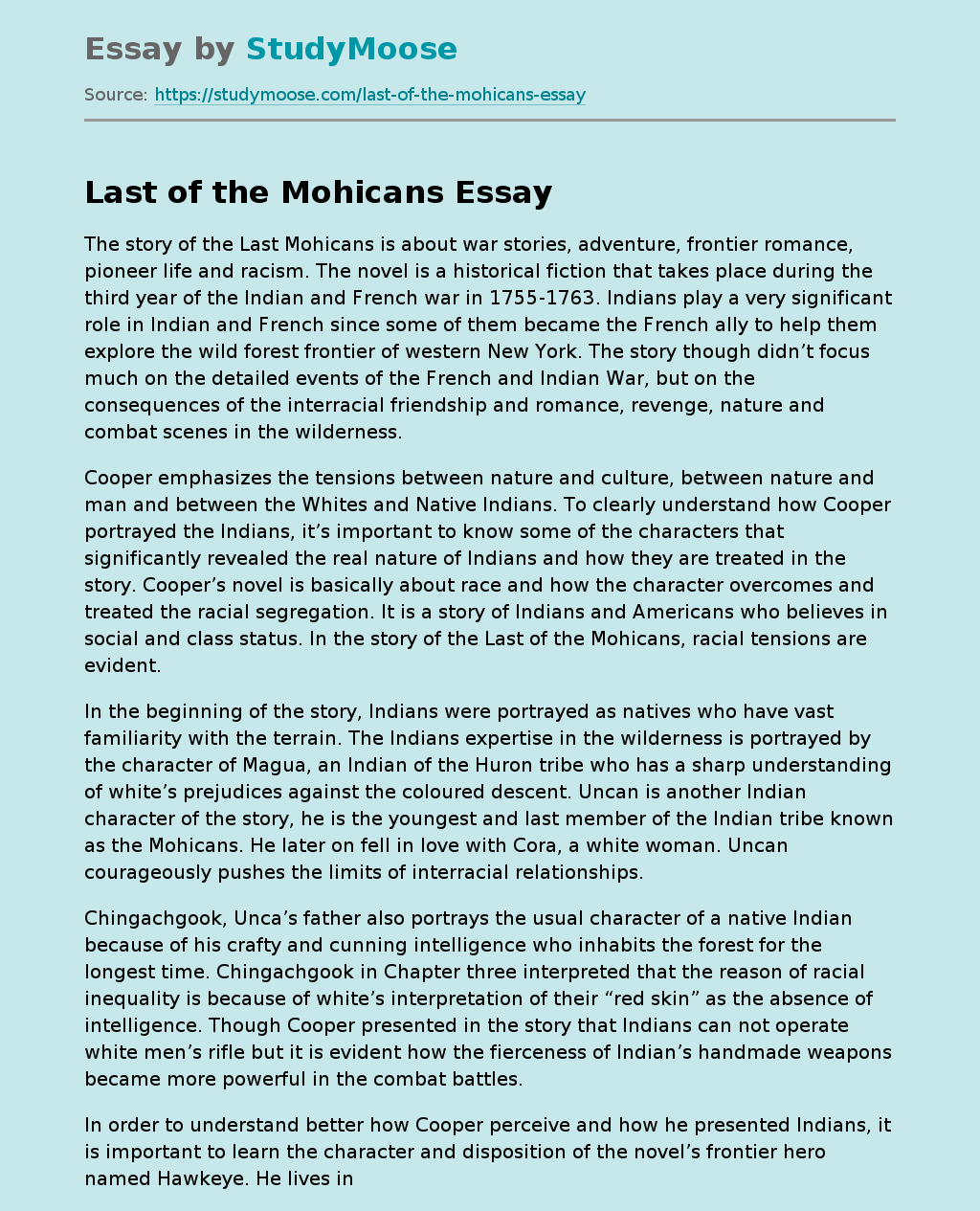