A tragic figure in literature is defined as the main character that makes in error in their actions, leading to their downfall. In A Thousand Acres by Jane Smiley, Larry Cook is portrayed as a very tragic character. His decisions and the outcomes of his decisions all seem to leave his life in ruins. He chose the wrong paths throughout his life, and in the end, is left to deal with the consequences alone. Larry’s relationships with his daughters, method of running the farm, and competitiveness with his neighboring farmers are all tragic aspects of his life that bring about his downfall in the end.

Don't use plagiarized sources. Get your custom essay on
“ Larry Cook from A Thousand Acres Analysis ”
Get custom paper
NEW! smart matching with writer

Larry was never seen as an ideal father figure to his three daughters, Ginnie, Rose, and Caroline. After their mother passed away, the girls were forced to obey his every word. His control over them affected them in the most negative ways possible. Ginnie and Rose never chose to leave the farm. They both transitioned from caring for their father to taking care of their husbands, never living life on their own.

Larry’s controlling attitudes lead to his daughters’ eventually standing up to him and going against him. As it is said in chapter 28 of the novel, “Daddy thinks history starts fresh every day, every minute, that time itself begins with the feelings he’s having right now….We have to stand up to that, and say, at least to ourselves, that what he’s done before is still with us, still right here in this room until there’s true remorse (216).

After reminiscing of past experiences with their father, Rose and Ginnie realize all of the pain and sorrow Larry caused in their lives. He sexually abused and molested them when they were younger and left them with an incurable scar in their spirits. He made them suffer in hopes of trying to make himself feel better. It is always tragic to watch a character resort to actions that harm others in order to help them find happiness. These unforgivable actions influenced the three daughters’ eventual decisions to turn against him. It is tragic for the audience to see the effect Larry’s actions had on his downfall and relationships with the only people he truly cared about in his life.

In hopes of pleasing his daughters, Larry chose to divide the shares of his farm amongst Ginnie, Rose, and Caroline. The farm, his most prized possession, was a very important part of his life and it was hard for him to let that go. He knew that someday he would no longer be able to care for such a large part of land, so he tried to control the future of the farm before he was already gone. When Caroline opted out of Larry’s decision, Ginnie and Rose were left with portions of the farm to take control of. While taking on these new responsibilities, they were also expected to care with their aging father, Larry. Larry was grateful for their commitment to him at first, but in the end, he took them for granted. He gave them a gift and then took it away. He chose to watch them suffer only to fulfill his own selfish needs. Larry hoped to watch Ginnie and Rose suffer by suing them to gain back the land he gave to them. It is heartbreaking that a father who claims to love his daughters so much would find happiness in watching them suffer.

Larry’s satisfaction in watching others suffer contributed to his desire for constant competition in his life. This attitude of his is one of the many occurrences that led to his spiraling unhappiness throughout his years on the farm. He defined his success in life by comparing it to others and that is never a healthy way to live life. His never-ending self comparisons to Harold Clark harmed his self image and therefore lead to the way he chose to live his life. He focused more on being the best rather than being a good person. He went to large measures to meet the expectations he had set for himself and yet in the end, loses all he had worked for. He thrived on seeing others suffer only so that he could be considered above them. As his daughter put it, “If Daddy got to them and hurt them in any way I would help them learn about evil and retribution. If he doesn’t, then they can have the luxury of learning about mercy and the benefits of the doubt (235).” Larry harmed others more than he realized. He loved to watch neighbors, especially Harold, fail and used their failure to help increase his value of himself. This thrill of competition led to his madness, allowing the readers to see the tragic downfall of his character.

Larry Cook is one of the most complex characters in Smiley’s novel, A Thousand Acres. His actions often went unexplained and not many readers are able to understand him and relate to him as a character. His story as displayed in the novel is one of a true tragic hero. Common characteristics of a tragic figure in literature are that they discover that they have brought the suffering upon themselves, and they see that their fate was revealed by their own actions. Larry’s most tragic quality was his way of searching for happiness. He felt that the only way to find happiness was to push others down along the way. He watched others suffer, and this eventually led to his broken life. His disturbing treatment of his daughters, his appetite for power of his land, and his competitive nature led to his broken family, broken farm, and potentially breaking himself, which is a tragedy within itself. 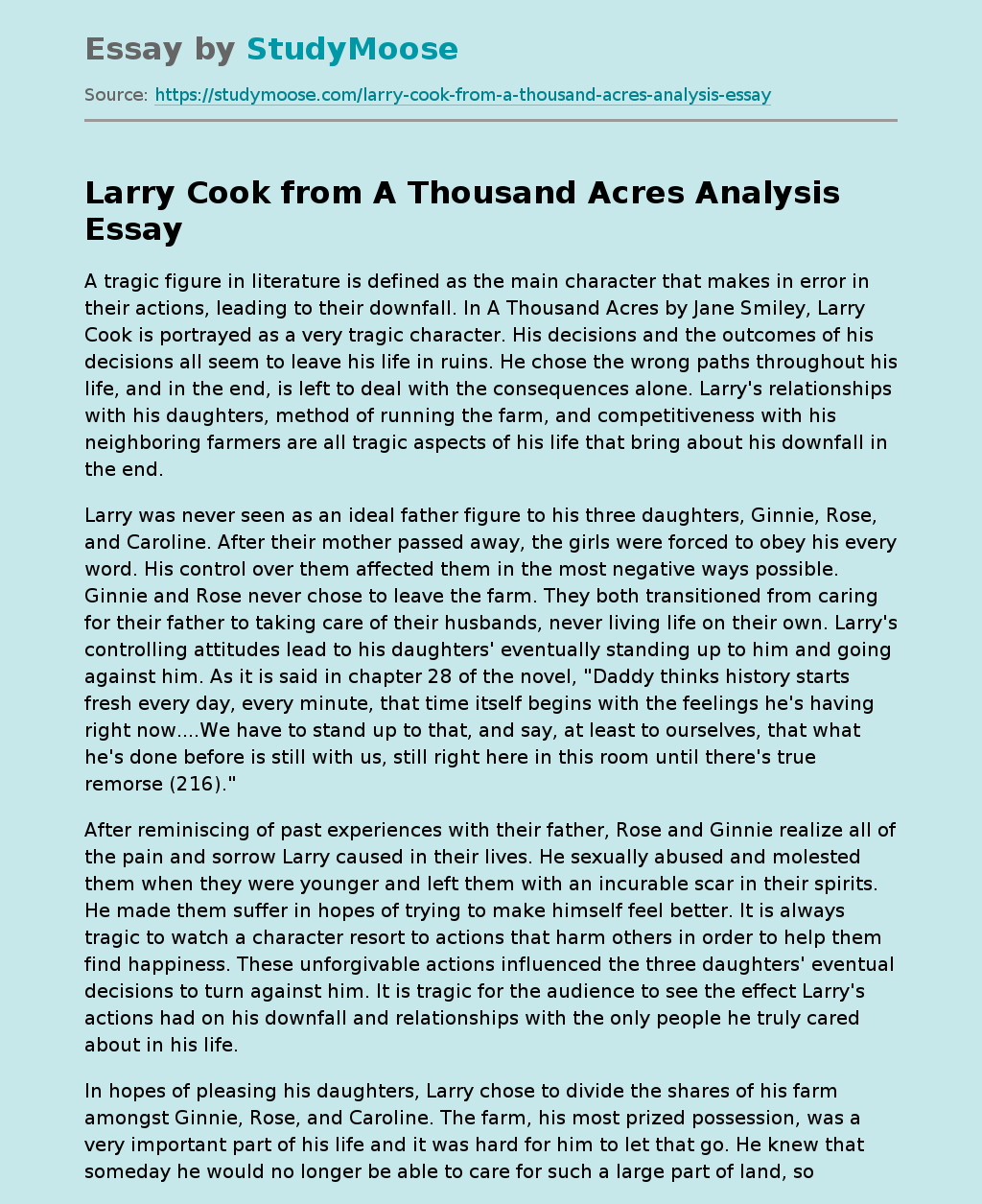