Don't use plagiarized sources. Get your custom essay on
“ Language Acquisition ”
Get custom paper
NEW! smart matching with writer

The Behaviorist approach to language acquisition:

The behaviorist theory was developed in the early twentieth century. The theory was developed as a protest against introspection. This theory suggests that everything that is capable of learning without a much of effort is not innate, but learned through conditioning – which is frequent association of stimuli in the mind.

Skinner’s theory of language (1957) explained language acquisition is related to operant conditioning. He stated that behavior is learned through reinforcement. Rewarding children when they speak the correct way could help the child to gradually learn an approximate correct desired speech, this is called shaping. In 1957, skinner published his book, Verbal behavior, in which he attempted to apply his form of operant conditioning to language learning. Skinner also stated that for instance when the child sees a “car” he / she interprets and utters the word “car” to the carer.

The carer reinforces the child, excepting that it is a car. This is referred to as Tact. This means understanding the relationship between the word and the object. Skinner also referred to echoic responses. This occurs when children imitate sounds heard from others and get immediate approval. He believes that accents and dialects were unconsciously modeled.

“A sentence is merely a part of a behavior chain, each element of which provides a conditional stimulus for the production of the succeeding element” (Fodor,Bever & Garret,p25) Skinner argued that adults are responsible in shaping, by reinforcing babbling of infants that mostly sound as words (Skinner, 1957, as cited in sheffer et al 2002) Behaviorist theory emphasize that language acquisition could be explained by the principles of learning such as classical conditioning, operant conditioning and observational learning.

Simple cases were used to explain this theory. Our natural verbal behavior is not only in the form of mands or tacts,instead , it is the form of inter-verbal responses.(Skinner. p.676) Skinner did not show much interest to children’s creativity and novel utterences.eg: mouses, he goed, he seed… Skinners conditioning model mostly depends on the role of parents for the child’s speech. Conditioning approach doesn’t explain a complex process of language acquisition. Evidence shows when it was tape recorded mothers talking to their children, shows only little shaping to their children’s grammar. (Brown et al,1969)

Reinforcement theory predicts that children would grow up and speak the truth, yet will be using incorrect grammatical errors. (M Eyesenck,1993) It’s not simply possible for parents to reinforce or punish all the possible utterances a child will use. Studies of parent-child interaction show that parents reward grammatically incorrect utterances that are truthful. The language that children hear contains too few examples for them to learn the correct rules. In behaviorist theory it is believed that infants do learn the language through imitation, rewards and practice through other role models. (Cooter & Reutzel, 2004)

Rationalism is the opposing view of behaviorism. Just like birds do fly and fishes swim, the capability to learn and use language is also genetically innate. Chomsky is one of the leading rationalist linguist. Noam Chomsky’s theory of language acquisition. (1957; 1965) He suggests that language acquisition is an innate faculty. Chomsky’s approach incorporates that children use an inherited hypothetical blueprint known as Language acquisition Device (LAD) (1968). Chomsky believes that people are born with a set of rules about language, which is called “Universal Grammar”. When a child begins to listen to his parents speaking, H/ she will unconsciously recognize which kind of language the child is dealing with, and setting the grammar to the correct language is known as “Setting the Parameters” Chomsky’s theory attempts to explain the competence acquired in language.

Evidence shows the existence of LAD, which comes from the speed of language learned. Without LAD it will not be as easy to acquire a language, although it depends on the environment enormously in which the child was bought up. Lenneberg (1967) supports Chomsky that, there is a critical period for language learning, also suggesting that language is difficult to achieve after a certain period of time. Just as the case study of Genie (Curtiss, 1977). Chomsky’s theory was also admired by McNeill (1966). He observed the grammatical relationships in the telegraphic speech in children. Sometimes the rules were over generalized.

Although the theory was supported by research findings, it was criticized that language doesn’t mean only grammatical rules. Some psychologists have argued that children’s speech development arises not so much from innate LAD, but from the child’s prelinguistic knowledge. Chomsky relies on people’s intuition.

Grammar is acquired often from social circumstances. Chomsky reduces language to grammar. He disregards the situation in which a child requires first language. Language cannot be bdeveloped as quickly as nativist theorists believe. The LAD contains of knowledge of grammatical rules common to all languages (Shaffer et al,2002)

Interactionist theory is concerned with the interference between environmental and biological factors, in the process of acquiring language. One of the most influential theorist of this approach is Jean Piaget.He believed the development of language depends on the cognitive process during childhood. Language is a part of the maturational development. This theory assumes that “Language acquisition is influenced by the interaction of a number of factors – Physical, Linguistic, Cognitive and Social” (Cooter & Reutzel, 2004).

According to piaget, the first two years of a child goes through sensory motor stage. Children at this stage develop object permanence. Piaget explains language simply by means of representing the environment. As intellectual abilities involve the development of schemas, similar principles were applied for language too. Piaget proposed two stages of language acquisition, which are Egocentric speech and Social speech. Egocentric speech is used extensively in the preconceptual stage of age between 2-4 years. Children of this age are unable to explain in the perspective of another (Piaget & Inhelder, 1969). Social speech becomes dominant between the ages of 5-7 years.

This approach explains the child’s social communication experience. Even during babyhood there is a communication that develops between the carer and the child. Cross culturally, similar patterns are used by mothers to communicate with their infants in order to indicate approval, disapproval, encouragement, discouragement (Ferhald, 1985). Vygotsky’s work is placed in this theory because he showed the importance of social interaction and learning language. Parents provide their children a language acquisition support system (LASS) in order facilitate their children’s acquisition of language. (Bruner, 1983). According to social interactionists, baby talk helps in the influence of language learning (Ferhald & Kuhl, 1987). 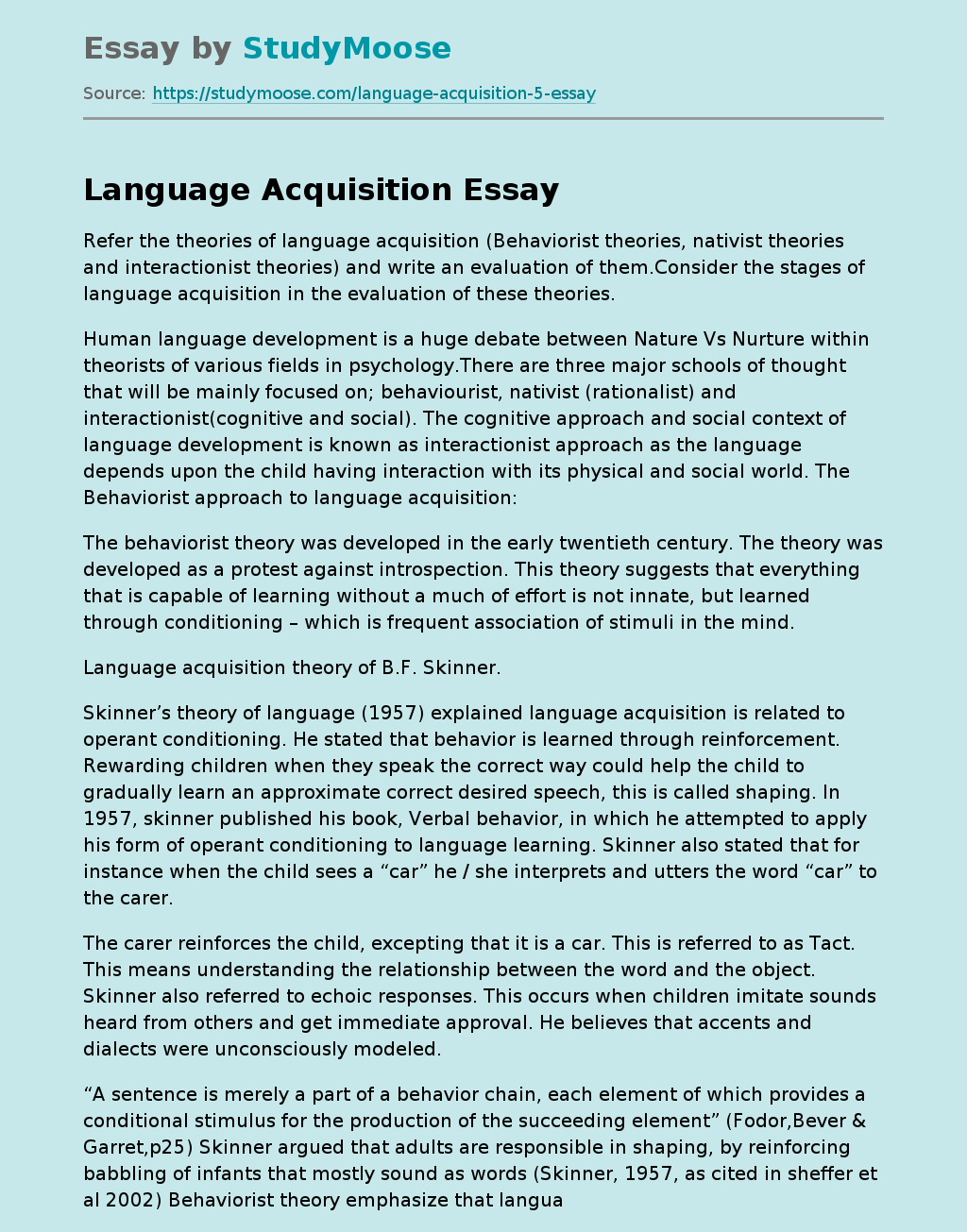