An essay explaining First Language Acquisition What is the most realistic theory that explains human being’s acquisition of their First Language? Considering the varying theories and perspective on how 1st language is learned, it is evident that no single theory can fully account for the complexity of the issue: How 1st language is learned. Based on the previous discussions and scholarly readings we had however, I am beginning to develop a conviction that Innatist theory holds the most realistic and consistent explanation among theories presented on how human beings acquire their “mother tongue”.

The Innatist view also known as the Nativist pioneered by Noam Chomsky laid out an explanation that every child possesses innate knowledge of language structure (universals) to detect and reproduce his or her 1st language. (Lightbown & Spada, 2006, p. 16). According to Chomsky, we all possess Language Acquisition Device that has predestined people to use spoken language, and makes us the only beings that can use spoken language.

I think this is generally true. No one can argue that human beings are the only species on earth that uses spoken language.

Many researches in the past tried to incorporate and teach animals to use any kind and forms of human language but all attempts have failed. I also have observed that the rest of the perspectives (theories) offered in the module namely; connectivist, constructivist, developmentalist and cognitivist are just “rehash” or mixtures and modified versions of behaviorist and innatist view. Thus, the only two outstanding theories and have original ideas that main served as pillars in First Language acquisition are namely behaviorism and innatism.

Although these two opposing theories offers great insights in learning L1, innatist’s perspective is much more comprehensive and consistent than that of the behaviorist. First, behaviorism is mechanical since neither conscious awareness nor intent is assumed to be operational in the learner. In contrast, innatism is realistic rather than mechanical since it does consider a child as an inert recipient. Furthermore, the behaviorist doesn’t include or advocate the critical period of learning, while innatism takes into account some of critical period hypotheses.

Universal grammar is also true in most cases. People who didn’t undergo formal instructions or any forms of schooling still learn the complexity of their native language. Finally, I think Chomsky’s ideas explained the facts in a way that no other theories can. Acquiring language is not a normal mental problem. Everyone sees small children pick up language effortlessly. Few, however, notices what an amazing phenomenon this is. Rarely any one would expect a four-year-old to master calculus.

Yet most people would not in be surprised when a four-year-old learns grammar, which is a difficult task. Children learn the rules of their native grammar by hearing a limited set of sample sentences. In addition, the limited information they receive is mathematically insufficient for them to determine grammatical principles, yet somehow they are still able to do so. Reference: Lightbown, P. M. , & Spada N. (2006). How Language are Learned: Oxford Handbooks for Language Teachers. (3rd ed. ) Oxford University Press 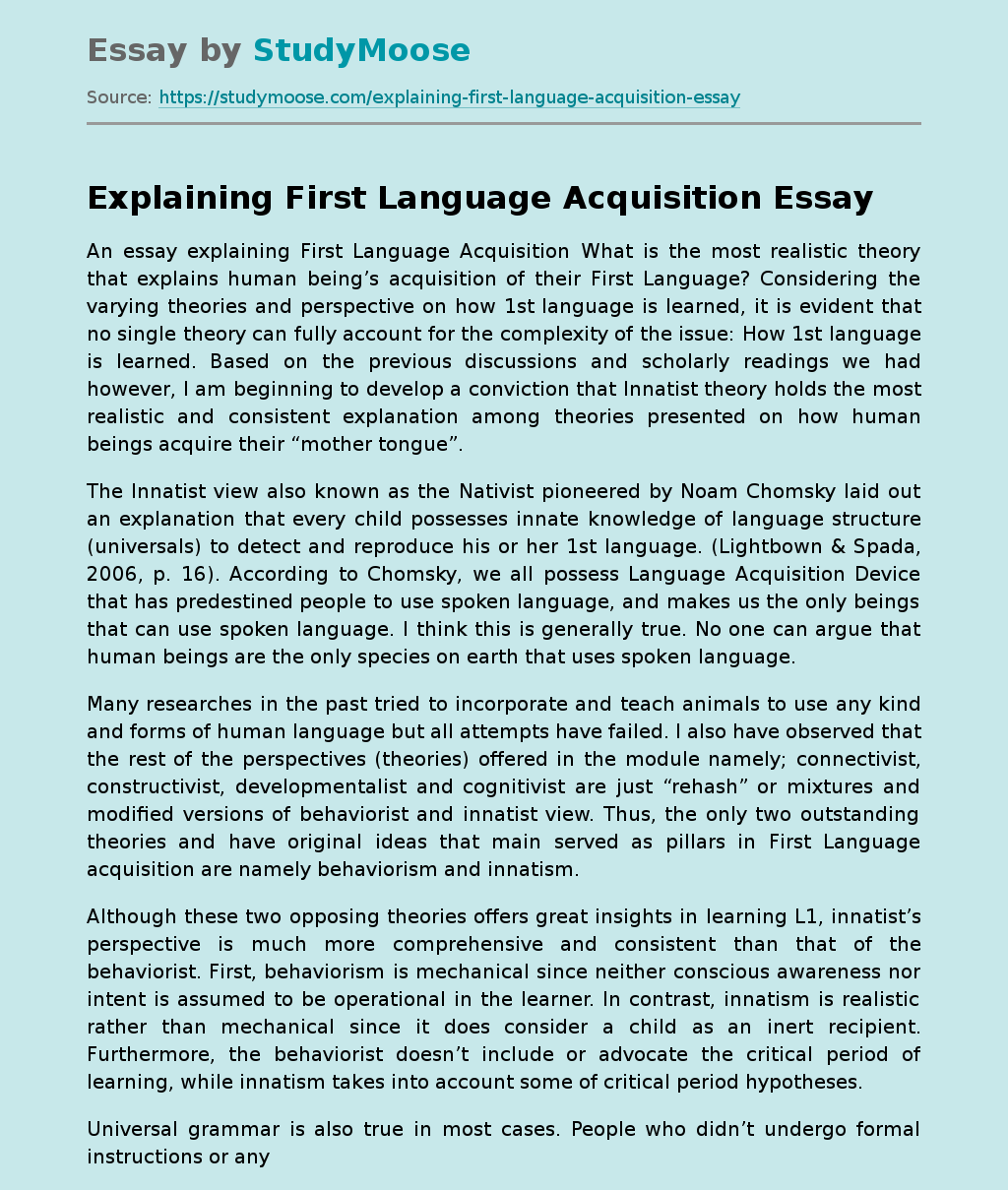