L. Frank Baum’s The Wizard of Oz (1900) presents what might be considered America’s first fairy-tale. Certainly, few other works of children’s literature claim such a widespread and socially profound influence as this work, which is as well known as a movie and via various stage-productions as well as many contemporary re-interpretations and variations on the original theme. “There is hardly a child who is not intimately acquainted with Dorothy and her adventures{… } more than one billion people have either seen the screen version of The Wizard of Oz or read L.

Don't use plagiarized sources. Get your custom essay on
“ L. Frank Baum’s Wizard of Oz ”
Get custom paper
NEW! smart matching with writer

Frank Baum famous book[… ] It is a rare child who cannot recite the words to “Ding dong, the Witch is dead,” or who doesn’t know what a Munchkin is. ” (Cashdan 218) Baum’s story faced initial controversy: and continues to receive a share of controversy for its depth of themes and resonances. These themes are rooted in political, social, and economic aspects of the human experience and Baum’s underlying theme emerges as one which celebrates the integrity of the individual and individual liberty above accepted social hierarchies, norms, or in some cases laws.

Proficient in: Wizard Of Oz

“Accepting who you are is the emotional chord that reverberates throughout The Wizard of Oz. The various psychological malaises from which people suffer–anxiety attacks, phobias, psychosomatic disturbances, and the like–often are the result of fears they harbor about what might happen if they interacted with others in an open and honest way. ”(Cashdan 236) As a uniquely American fairy-tale, Baum’s novel also inverts many of the classical motifs of historical fairy-tales.

Characters in classical fairy-tales often face dillemas brought upon by sin or overindulgence: greed or thwarted ambition or even revenge.

In ‘The Wizard of Oz” all fo the story’s main characters deal instead with “perceived shortcomings in the self as opposed to excesses[… ] The Scarecrow, the Tin Woodman, and the Cowardly Lion are convinced that they  are not as intelligent, feeling, or courageous as others. Their hope is that Dorothy will help them remedy these shortcomings[… ] helping her companions fulfill their destinies helps her fulfill her own.(Cashdan 218)

Baum’s depiction of OZ is a utopian one which forwards profound political, social, and economic ideas beneath its dazzling and myth-inspired fairy-tale surface. Many readers and scholars have identified aspects of an idealized economy and social order in the Oz books “These aspects include, among others, a communal sharing of food, the elimination of money and poverty, a dearth of punishment, an absence of greed[… ] nd the virtual elimination of death or disease. ” (Karp 103)

Baum’s vision is a combination of pastoral and urban utopias, a vision which is epculiarly American and remains distinctive over a century past its inception. The utopia, however, is a constructed on a series of apparent contradictions: “a utopia that is simultaneously egalitarian and authoritarian; and to establish a society that values and protects individual rights, interests, and freedoms, as well as cultural multiplicity, at the same time as it promotes the value of a unified state to which individuals owe allegiance.” (Karp 103)

Baum’s answer to these contradiction resides in his emphasis upon individuality and the concept of “rugged individualism,” which reacts against the subversion of the individual will within “an impersonal industrial corporation and the loss of independence and distinctness affecting wage earners in the United States[… ] Baum populates the Land of Oz with a plethora of distinct and unique characters and has a number of these characters (as well as his narrators) praise individualism and eccentricity.” (Karp 103)

Though Baum intended to entertain readers and spark their imaginations, this “populist” articulation emerged, itself, as a political imperative; the book itself inciting the individual contemplation of personal integrity, differentiation and destiny. “Frank Baum’s goal was to please children, and the characters are both endearing and enduring.

Though this narrative tale faced controversy, Frank Baum rived long enough to see it pass, and as it did the book’s popularity increased. ” (Livingston, and Kurkjian) Similarly, Baum’s utopia found allegiance to the seemingly contradictory impulses of the Gilded Age, wherein economic surplus and wealth are celebrated in tandem with individual orientation and self-actualization. “The story of an archetypal American girl in silver shoes on a road paved with golden bricks in a country named for the abbreviation for ounce would have rung loudly for an audience in the 1890s caught up in “the financial question.” (Ziaukas)

On the yellow brick road, the creatures Dorothy finds and associates with: Lion, Scarecrow, and Tin Man, each in search of a part of themselves represent “American elements, the farmer, the worker, the loquacious politician, and the archetypal Americanness that is Dorothy, seems to have a sense that something is missing, that she or he lacks the ability to fulfill his or her destinies: the farmer feels stupid and the worker empty; the roar of the politician rings hollow.” (Ziaukas)

By instilling the traditional elements of fairy-tales with tremendous social, economic, and political resonance, Baum attained a fresh idiom aimed directly at those young minds searching for the measure of the individuality in American society, forming a passionate and creative anthem of individuality and selfhood while maintaining an allegiance to a progressive social order. 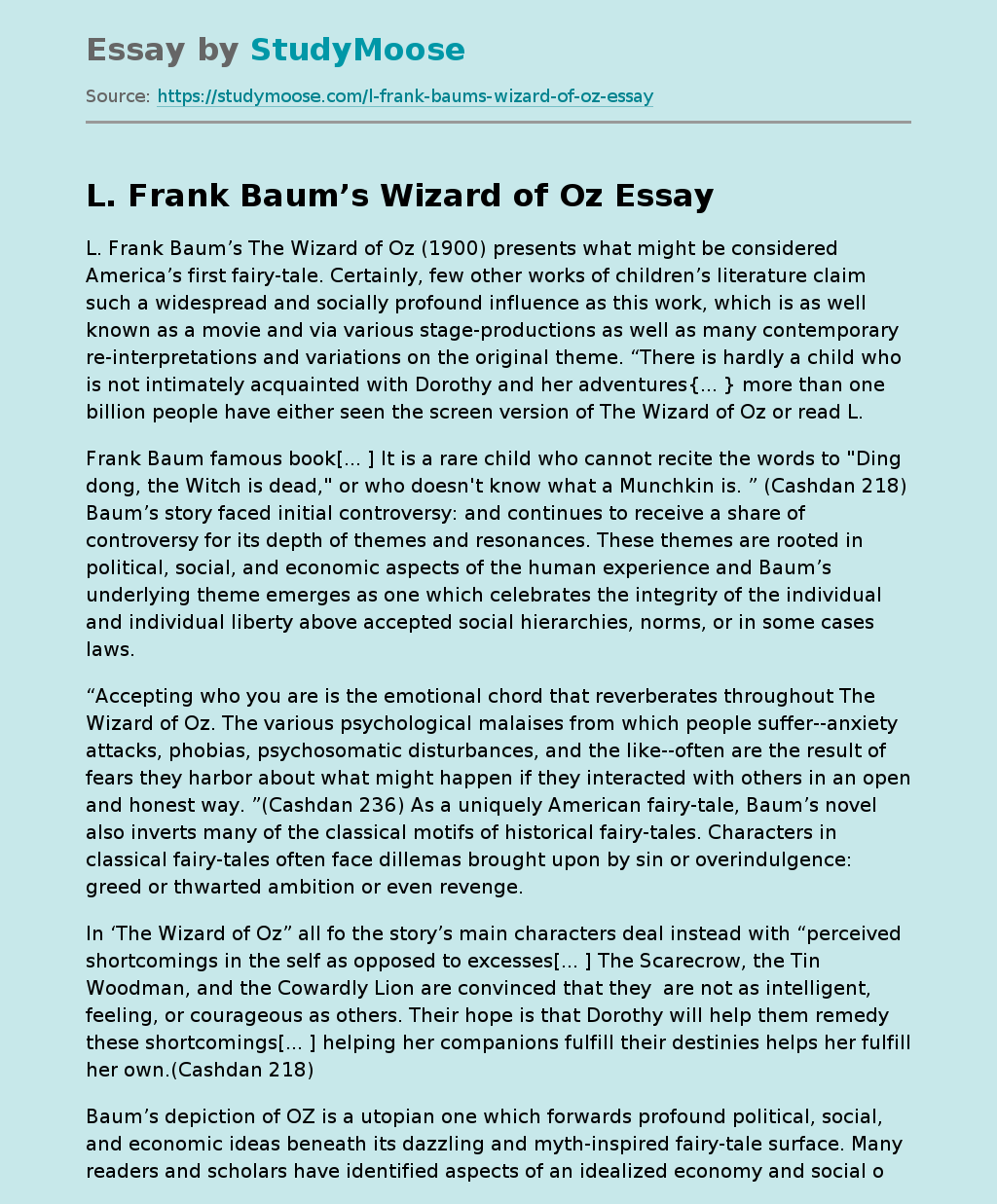