Keeping the Drinking Age at 21

Keeping the Drinking at 21
In the world today, the majority of countries has a legal drinking age of eighteen or lower. Unlike many other countries, the United States has a minimum legal drinking age of twenty-one. Although our laws acknowledge that at age eighteen one is an adult who possess sufficient maturity and judgment to operate a motor vehicle, serve in the military, perform jury duty, sign a contract or even get married, those same laws deny that same adult the right to purchase, possess or consume alcohol.

Turn in your highest-quality paper
Get a qualified writer to help you with
“ Keeping the Drinking Age at 21 ”
Get high-quality paper
NEW! AI matching with writer

And, while this is true, alcohol is already an easy accessible drug that can facilitate not only several detrimental health effects, but it can also create deadly or harmful events for the individual and others which is why the legal drinking age should remain at twenty-one. In the United States many ague that is ridiculous that the legal age to get married, to vote, fight in a war is legally eighteen, but drinking is still set at twenty-one.

However, there are laws such as adopting a child or gambling is set at twenty-one and renting a car is set at the age of twenty five (“Drinking Age”). However, even if the law for drinking was the only law that was set at twenty-one, many of the laws that are set at eighteen are not harmful to one’s or others well-being or health. While some say that there are many health benefits to drinking such as having a glass of wine to improve one’s heart or reduce the risk of diabetes if drinking is minimal, that complete opposite effect can happen if one where to consistently over drink alcohol (“Nutrition and healthy eating”).

In addition to the health risk, a person’s can suffer long term health effects, that can range from problems with cardiovascular problems, liver diseases, cancers risk, as well psychological and social problems as well. And though many might say that these effects can happen to anyone, that is true, and that but those who start drinking at younger ages are more statically likely to become chronic users of alcohol, and chronic users are more likely to develop problems in these areas.

Many might say that a beer or two is a great way to relax after a long day; however when one does the commonly especially at a young age it can have many permanent effect to the brain. For instances, a typical human brain is not fully developed until a woman is about twenty-three and a man about twenty-five (“Fact Sheets- Alcohol Use and Health”). The primary area that is still growing when an adult is eighteen is the prefrontal cortex which is initially responsible for decision-making, emotional regulation, memory formation, planning and organization (“Mouse Party “). When people drink alcohol, the chemicals that come from alcohol are going straight to a person’s brain. Once those chemical arrive to the brain they basically stop the transfer key chemicals, glutamate and GABA, which makes the brain slow down because they are not getting the chemicals they need. The primary area of the brain where alcohol stops they processes of both glutamate and GABA are found in the prefrontal cortex (“Mouse Party “). This process can explain why people often lose memory of their wild night of fun, or they are more likely to participate in more high risk and irresponsible behavior. When a underage person drinks, their brain could very well suffer irreparable damage that can result in greater vulnerability to addiction and alcoholism, dangerous risk-taking behavior, reduced decision-making ability, memory loss, depression, violence and suicide(“Drinking Age”), (“Mouse Party”).

Many argue that there are many countries with a lower drinking age than the United States. For example many European countries have their ages at eighteen some as a low as sixteen. While this is true, it doesn’t mean that European countries do have problem that have steamed from under aged drinking. For instance, many European countries have worse problems with underage drunkenness, injury, rape, and school problems due to alcohol (“Drinking Age”). l. Not to mention that they have a higher proportion of kids and young adults drinking than the United States. In addition it was should that many more alcohol related health concerns in places with a higher access to alcohol. In fact, studies have shown that when an age group has access to something such as alcohol, the young age group will have easier access to alcohol, so if the drinking age was legally lowered it mean easier access to high school and middle children (“Fact Sheets- Alcohol Use and Health”). Even though there are many laws that prevent underage drinking there are many who still have access to it. In fact statistics have shown that over eighty percent of high school students said that alcohol was either “very easy” or “fairly easy” to obtain (“Fact Sheets- Alcohol Use and Health”). In addition, reports have shown that over forty percent of high school seniors have admitted to drinking in the last thirty days, not to mention over eighty-seven percent have admitted to at least having one drink in their life time (Fell).

In addition many senior also admitted to gaining access to alcohol through fake identification cards. Also stating that they were also fairly easy to make or gain access to. So, question is does the drinking age need to be lower. If so many underage people have least tried alcohol, where is the real debate? In addition, many states actually have loop holes around the federal mandate that prohibits drinking to those who are underage (“Drinking Age”). For example, there are over twenty-five states that allow underage drinking in instance where religion plays a factor (“Drinking Age”). In addition there are exceptions for education and as well as if alcohol is consumed on private residents where in the supervision of an adult. Therefore, with fake-id and the option in many states to drinking the drinking age really does not need to be lower. Some may point out there are still drunk drivers out there and that are even more drunk driver arrest today than before they act of 1984 which set an age limit to drinking (Fell). While this is very true, many fail to point out that there is more support and police involvement to prevent drunk driving.

For instance, many organizations such as MADD (mothers against drunk driving) have become key players in gaining support and encouraging more regulation of under the influence to driving. Many states have also lowered the alcohol intake that a person can consume before they are considered unsafe to drive (“Drinking Age”). For example, in California the real drunk driving limit is .08 blood toxicity levels, but even if a person is below a .08, but they are still above .01 then that individual is still considered under the influence and they are still given a ticket (Fell). In addition to the dangers of the roads for that are associated with drinking and driving. In reality with the laws that have been instilled car accidents related to drinking and driving have been reduced. For example, the National Highway Traffic Safety Administration (NHTSA) estimated that MLDA 21decreased the number of fatal traffic accidents for 18- to 20-year-olds by 13% and saved approximately 27,052 lives from 1975-2008. On a related note, 76% of bars have sold alcohol to obviously intoxicated patrons, and about half of drivers arrested for driving while intoxicated (DWI) or killed as alcohol-involved drivers in traffic crashes did their drinking at licensed establishments (“Drinking Age”).

Therefore, while some may argue that people might have easy access and the minimum drinking age should be lowered it is necessary to look at the statistics and observe that the drinking age being at twenty-one is important to maintain as it helps save lives. In conclusion, while there are pros to consuming alcohol such as improving one’s heart or risk for serious diseases as well the right of passage to one’s mark of adulthood. Alcohol still possesses a great risk to the underage person who is drinking and others. There are not only serious long term health effects that are significantly correlated with one starting to drink before the age of twenty-one, but the legal drinking is a law that has substantially prevent the loss of live since it was enacted. Furthermore, while there are other laws that allowed at eighteen it is important to understand that many of those liberties are not at the risk of one’s health, and there are many other liberties as well that are not granted until the age of twenty-one and in some cases twenty-five. Therefore legal alcohol consumption should remain at the age of twenty-one for it can be not only detrimental to one’s health, but the rest of society.

Works Cited
Fell, James. “An Examination of the Criticisms of the Minimum Legal Drinking Age 21 Laws in the United States from a Traffic-safety Perspective.”www.udetc.org. Nonpartisan charity , 23 09 2012. Web. 9 Sep 2013. . 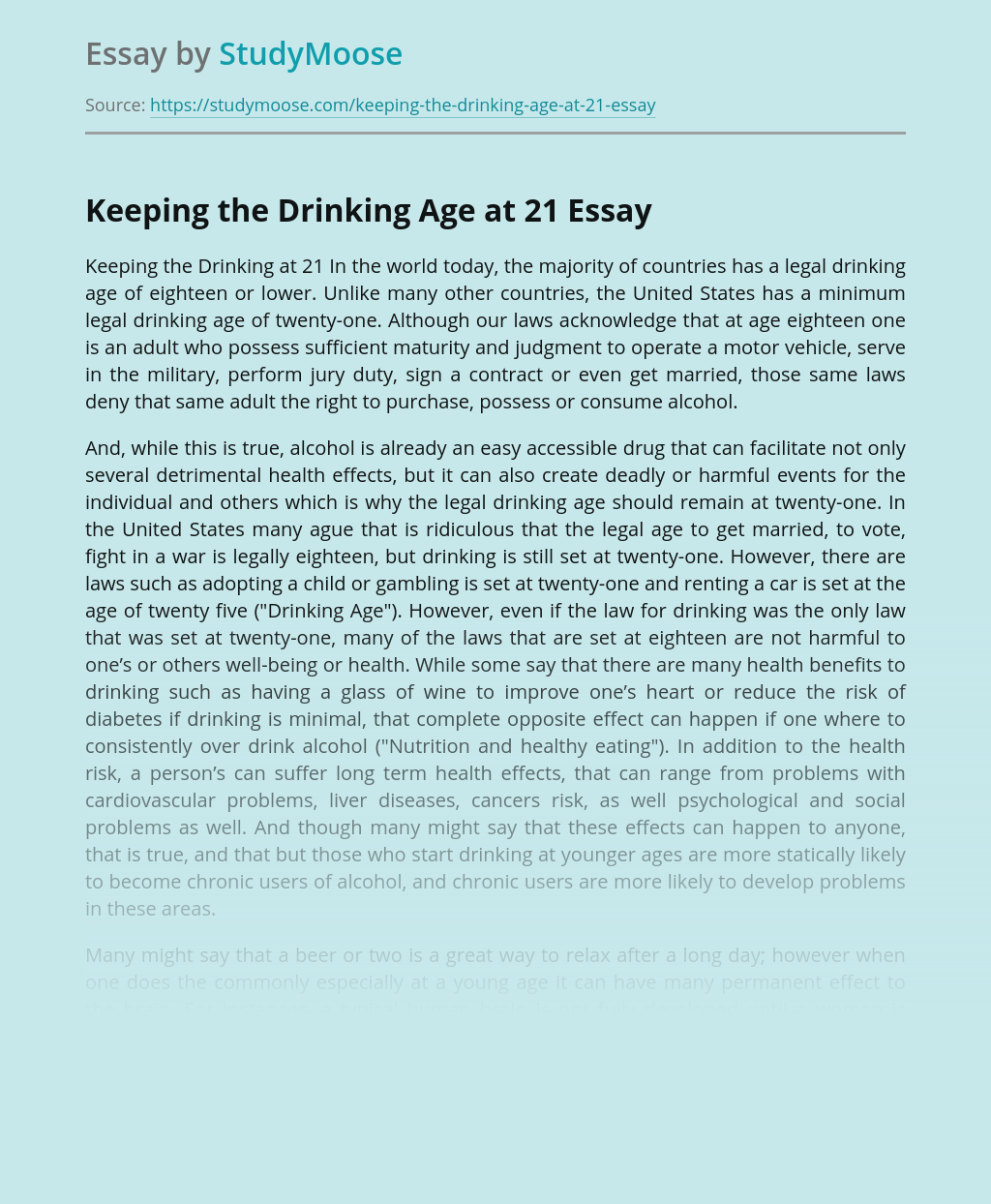 Turn in your highest-quality paper
Get a qualified writer to help you with
“ Keeping the Drinking Age at 21 ”
Get high-quality paper
Helping students since 2015
Stay Safe, Stay Original