Don't use plagiarized sources. Get your custom essay on
“ Judicial activism ”
Get custom paper
NEW! smart matching with writer

There have been arguments in different parts of the world on different provisions that gives room for judicial activism. The basic argument has been due to the ability of judicial activism to result into violation of separation of powers of the legislature and the judiciary. This is because it gives the judge the power to create laws rather than conforming to interpretation of the existing law. This is the functions of the legislative arm of government.

On the other hand, proponents of judicial activism have argued that it creates a situation where the judges’ rulings are not limited which gives room for the broader application of the law.

Generally, judicial activism has been criticized because of the possibility of it being used by liberals or conservatives to create new laws by avoiding the traditional legislation processes that are subject to public opinions and debates (Roosevelt, 2008). It is important to note that the officials in the judiciary are appointee while the legislature is directly elected by the citizens in the country.

This means that the judiciary does not have the ability to legislate. For this reason, judicial activism has been accused of being responsible for unacceptable judgments in the courts of law.

It allows both conservatives and liberals in the justice systems to transgress the jurisdiction of the law court and make judgments that are inconsistent with the law of the land. Some people have defended judicial activism arguing that the judge does not create any law. However, the effects of the judge basing his judgment on his political and personal thoughts have the same effects as a written law. Both either limit or allow an action against an offender. Depending on the legal systems in a country, the level of judicial activism varies.

However, it is important to note that there is eminent separation of powers of the judiciary and legislature in Canada. The traditions of the Canadian justice system have a very strong respect for the constitutional function of the legislature. It is the responsibility of the court and the justice systems to ensure that the law of the land is applied impartially as it is written (Kelly, 2006). The Canadian justice systems are based on the British and the French legal systems. These legal structures rely more on the judge’s discretion, the judicial policies as well as the common law.

Initially, the charter was praised by its admirers who argued that it was the greatest achievement in the history of Canada making it more democratic and just. However, some people have argued that the charter has done centrally to the expectation by empowering the judges to make unacceptable rulings (Kelly, 2006). According to Leishman (2006), before the enactment of the charter into law, the legislative bodies in Canada which includes the parliament and the provincial legislatures had well defined functions in the country which made them supreme.

They had the constitutional authority to make new laws and amend or revoke the existing ones. However, the situation has changed since the enactment of the charter. Today, the judiciary has taken over the legislative duties as well as its judicial duties. It has become a common occurrence in the Canadian legal systems for judges and juries, who are not elected but appointed, to impose guidelines on key policy issues to the parliament and the provincial legislators who are elected democratically by the people.

Democratically, these representatives are expected to form the legislative arm of government but the Supreme Court has dodged the principles of democracy and has allowed judges to legislate on the bench resulting into unacceptable and unrealistic judgments. Leishman (2006) provides several cases in the Canadian legal systems where the judges have made unacceptable judgments based on their personal ideologies about an issue. An analysis of these cases indicates that individuals, corporate organizations and social entities are affected by the unacceptable rulings in many ways.

Some of the court ruling that is aimed at promoting rights and freedoms have in reality resulted into injustices and biasness because they are based on the judge’s personal opinion which may not be in the best interest of all individuals or entities involved in the case. An example of such as case was Linda Gibson‘s picketing case. Gibson was a pro-life advocate who had a personal opinion against abortion in the country. Being a victim of the traumatizing effect of abortion on the woman and having witnessed the negative effects of abortion for many years, she opted to picketing outside an abortion clinic in the city.

In 1994, the court order was issued ruling against picketing within the vicinity of abortion clinic. This is despite the charter assuring all Canadians the freedom of expression. This is one of the cases where the judicial activisms have been used to impose unacceptable judgments which violate the fundamental rights of individuals. It is important to note that it is the role of the legislature to limit individuals’ rights and freedom while the courts are expected to make judgments based on reasonable interpretation of the law.

Another important case which indicated the level to which the judiciary has overstepped its mandate is the Vreind v. Alberta case in which Delwyn Vriend, an employee at King’s University College, had appealed against his dismissal. He was accused of insubordinate behavior for wearing a shirt that mocked the conservative codes of conducts in the college that prohibited homosexuality. Due to pressure from some resentful students in the college, the administration was forced to dismiss Vriend.

He appealed to the human rights commission in the province against the discriminative dismissal and eventually the case went before the courts. The court ruled against the college’s decision to dismiss the worker arguing that it was an act of discrimination based on sexual orientation. This form of discrimination was against the charter and related acts in the province (Leishman 2006). However, careful analysis of the case demonstrates that the decision was as a result of judicial activism which severely affected the college.

This is a clear indication that the Supreme Court overstepped its jurisdiction by taking up legislative roles. It was wrong for the Supreme Court to ignore the decision by the legislative arms of government, who are directly elected by the people (Roach, 2001). Based on these ruling, where the judges ruled according to their personal opinions on the issue and not a reasonable interpretation of the law, the Supreme Court has made other ruling that favor homosexuality in Canada.

For example, based on the Vriend case ruling, the court ruled in favor of same sex couples in the M. . H. case in 1999. The court argued that homosexuals should be granted equal rights according to the charter despite the legislature rejecting attempts to incorporate such provisions in the charter. The court was well aware of the failed attempts by the attorney general to legally allow homosexual couples to have the same rights as legally married couples. The legislatures being the people representative rejected the bill due to the public outcry and widespread objection. However, the court’s ruling on the M. v. H. case was very surprising (Cossman, 2002).

Rather than amending the law, the court humiliated the legislature by giving it half a year to amend that law in order to grant homosexual couple equal rights and responsibilities. The legislature responded to the order by the court and amended the law by adding statutes that give homosexual couples the same rights as heterosexual couples. Although some people may argue that it is reasonable for the charter to protect the rights of all irrespective of their sexual orientation, it is interesting to note that the court was able to achieve a legislation function that the legislature was unable.

There is no doubt that the court ruling ordering the legislature was uncalled for and unacceptable given that the two arms of government need to be separated. The role of the court is to interpret the law a while the legislative functions are bestowed on the legislature by the constitution (Christopher, 2001). There are several ways in which the law court can oversteps its mandate and make unacceptable rulings. The most interesting aspect of judicial activism in Canada is that the proponents of these moves by the court base their arguments on the charter on rights and freedoms.

For this reason, the most common form of judicial activisms involves the court extending the rights and freedoms of an individual contrary to the provisions in the law. An example of such cases is the Vriend case where the court extended the rights of the complainant to include sexual orientation which is not included in the charter. The court can also make unacceptable rulings by increasing the powers of the judiciary. This is the case in the M. v. H. case. In this case, the court overstepped its constitutional function by ordering the legislature to amend the law accordingly.

Although it is the legislature which passed the law, its role was to rubber stamp what the court had already legislated which is not acceptable (James, 2003). There are cases where the court has made unacceptable rulings by increasing the rights and freedoms of a group of people. These groups can be an ethnic community or groups with a certain ideological believe such as homosexuals, pro-life or pro-choice. For example, in the case of Linda Gibson‘s picketing case, the court made a unacceptable ruling which increased the freedoms of the pro-choice group while limiting that of the pro-life group.

In the same way, by the court pushing for amendment of the law in the M. v. H. case, the court increased the rights of homosexuals (Leishman, 2006). Conclusion The enactment of the charter on rights and freedoms in Canada was seen by many as a revolutionary legislation in the history of the country. The law guaranteed all Canadians equal rights and freedoms. Unfortunately, the charter has turned into a threat to the citizens in the country because the courts have used it to defend unacceptable rulings that amount to judicial activism.

In the enactment of the charter, the legislators rejected all attempts to incorporate issues related to homosexuals, pro-life and conservative Christian values. However, in many instances, the judges in the law court have overstepped their constitutional functions and legislated from the bench. The rulings are based on the personal and political ideologies and beliefs of the presiding judge which may not be in the best interest of the general public. Although some level of judicial activism may be essential in any democratic society, some resultant rulings are unacceptable. 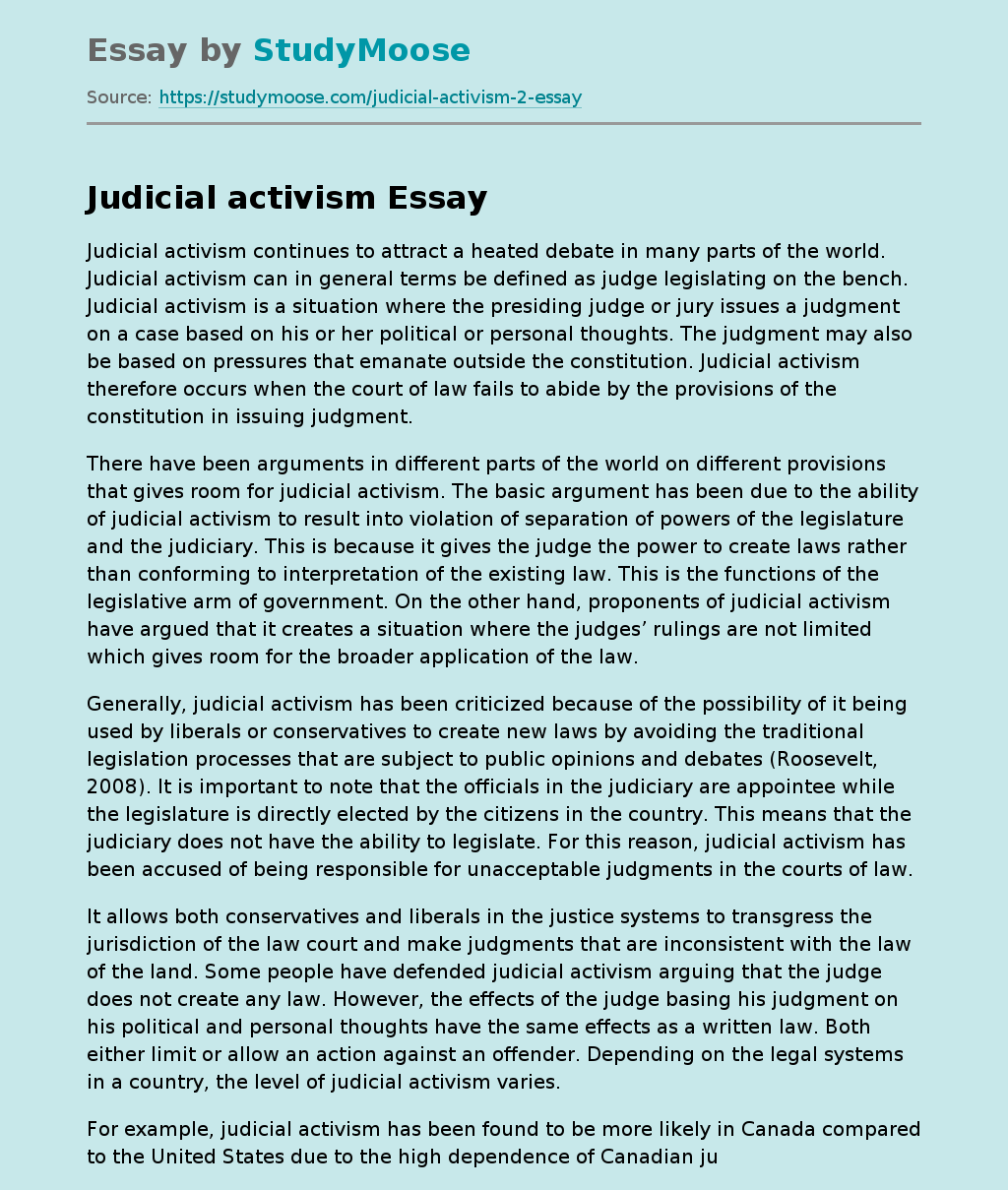