Judgment and Racism in "To Kill a Mockingbird"

‘Shoot all the bluejays you want, if you can hit em, but remember it’s a sin to kill a mockingbird’ (Lee 98). Harper Lee is one of only twenty authors to have won the prestigious Presidential Medal of Freedom (Wikipedia) for her contributions to literature, and although she has only published two books, she is one of the world’s best-known authors. Her award-winning novel, To Kill a Mockingbird has sold over 40 million copies worldwide (Austin). This coming-of-age novel about racial prejudice and preconceptions is packed with symbols and empathy.

Don't use plagiarized sources. Get your custom essay on
“ Judgment and Racism in “To Kill a Mockingbird” ”
Get custom paper
NEW! smart matching with writer

How do imagery and symbolism used in To Kill a Mockingbird affect the tone of the novel?

Jean Louise Finch, often referred to as Scout lives with her brother Jem, her father Atticus and their black housekeeper Calpurnia, in a segregated small town called Maycomb in Alabama during the Great Depression. Through the eyes of the six-years-old tomboy Scout, one gets to witness the judgment and racism in her community. Jem and Scout, along with their friend Dill, become very interested in the mysterious neighbor, a recluse named Boo Radley, whom they have never met nor seen, only heard rumors.

When a black man, Tom Robinson is accused of raping Mayella Ewell, a crime he did not do, Atticus is assigned as his attorney. Although Maycomb residents refer to the Ewells as untrustworthy white trash, the jury still convicts Tom. It turns out that even the institution where one is to be judged by a jury peers does not work because of the segregation, racism and preconceptions in the society.

It is clear that Lee has taken inspiration from Roman times as several of the characters are named after famous Roman figures. The African American housekeeper who for scout and Jem is the closest thing to a mother figure, is named after Julius Caesar’s last wife, Calpurnia. She has become a well-known literary character, she appears in the HBO series Rome and Shakespeare’s Julius Caesar, among others. Calpurnia’s contemporaries have describe her as a faithful and humble woman (Carcopino), these characteristics is not far from how Calpurnia is perceived in the book. She is faithful to the Finch family and plays a great role in teaching Scout and Jem to be a good person despite their circumstances. “It’s not necessary to tell all you know. It’s not ladylike — in the second place, folks don’t like to have somebody around knowin’ more than they do.’ (Lee 136).

Judgment and Racism in "To Kill a Mockingbird". (2020, May 24). Retrieved from https://studymoose.com/judgment-and-racism-in-to-kill-a-mockingbird-essay 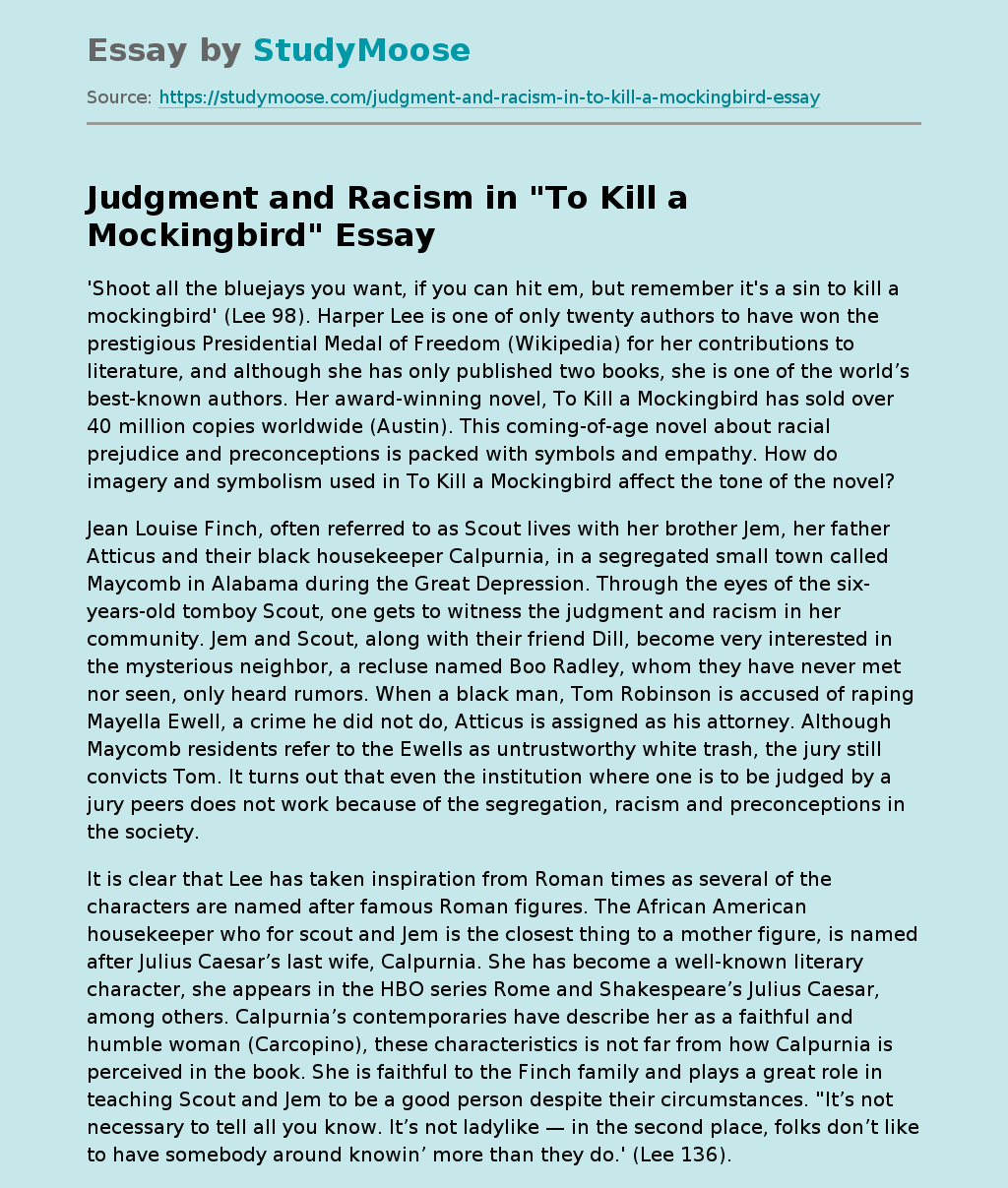