Life is full of people who inspire , influence and leave some impression on, you – in sense good or bad, they change the way you look at things and that is whom, you consider your role model to be, however , it was crystal clear in my mind that the person would be no other but, JRD TATA. Having grown up reading his motivational stories, tales of success, inspirational examples and hearing references of his revolutionary thinking and conquest in varied fields, little doubt was left that it could be someone else.

That’s precisely when i stumbled upon , The Last Blue Mountain written and crafted so well by R.M. LALA that the entire saga of JRD TATA had me beguiled and captured for a couple of days. What fascinated me, was not how he was so successful but how, he was generations ahead in his thinking and miles ahead of his any competitor. Exactly at the moment there was a stirring feeling of, how little we know of the man who has gone on to become a synonym for richness, Achievements and out of box thinking.

The mind was clear, it had to be Jehangir Ratanji Dadabhoy Tata and no one else. Born in Paris, an Indian by nationality and “karma” JRD TATA went on to be the face of Industrialization in India. A man known for his ethics and principals took over in an era where the rules were more British friendly. Little is it known that JRD TATA was born to a French mother and that his first language was French.

JRD TATA is credited to be the founder of TCS, Tata Motors, Titan Industries, Tata Communications, Tata tea, and Voltas but little is it known that he was the first Indian to be a licensed pilot as well. He went on to found India’s first commercial airline, Tata Airlines in 1932, which became Air India in 1946, now India’s national airline. JRD Tata was appointed as Chairman of Air India and a director on the Board of Indian Airlines – a position he retained for 25 years.

Such were his success that he was bestowed with the title of Honorary Air Commodore of India. Bharat Ratna JRD Tata had a life which were full of achievements and recognition, yet people who have had the pleasure of interacting with him, were in love with not the industrialist inside him but for the person he was. As Sudha Murthy recalls – “ I always looked up to JRD. I saw him as a role model for his simplicity, his generosity, his kindness and the care he took of his employees. Those blue eyes always reminded me of the sky; they had the same vastness and magnificence.” (Sudha Murthy is a widely published writer and chairperson of the Infosys Foundation involved in a number of social development initiatives.

Infosys chairman Narayana Murthy is her husband.) So i chose JRD Tata not only because he has stood up and shone in the field of business or went on to capture varied field and have the capability to see beyond the normal horizons and peek into what lay generations ahead but also because people remembered him to be a good human always. He is known for his kindness, simplicity and the care he took of people around. He goes on to teach everyone a lesson of humbleness and significance of “karma” in ones life. He personifies – simple living, high thinking and teaches us how to maintain a balanced personality. There is one quote of his, which reflects a great volume of him – “BE NICE TO PEOPLE ON YOUR WAY UP, FOR YOU NEVER KNOW, WHOM YOU WILL MEET, ON YOUR WAY DOWN”

JRD Tata never let success deviate him from a path of being a human. The acknowledgment that one day what has been built with hard work, sweat and time may cease to exist, made him altogether more grounded and related to reality and people.

The views which i would want to adopt in my life are the humbleness and kindness. For he makes me realize that it’s not a person’s bank account which makes people like him, it is the behaviour which he has. It’s about being a human. Yes, it will always be about hard work and dedication to succeed. To be able to take risks and trust your decisions but it will also be about the fact that after every failure you would have the courage to try again. Its about doing your work with sincerity and the rewards and acknowledgments shall follow without even looking for them.

Its about learning the elementary of life – that loss is a reality and loving what you do is the best thing you can ask for. I have imbibed the fact, that if you wish to leave a mark behind, you have to be honest and truthful to your work but at the end of it all, being a good human is more essential than creating a good product for consumption.

In the end nothing describes him better than his own words – “I never had any interest in making money. None of my decisions were influenced by whether it would bring me money or wealth, all I was concerned about was, sleep at night.” -JRD TATA. 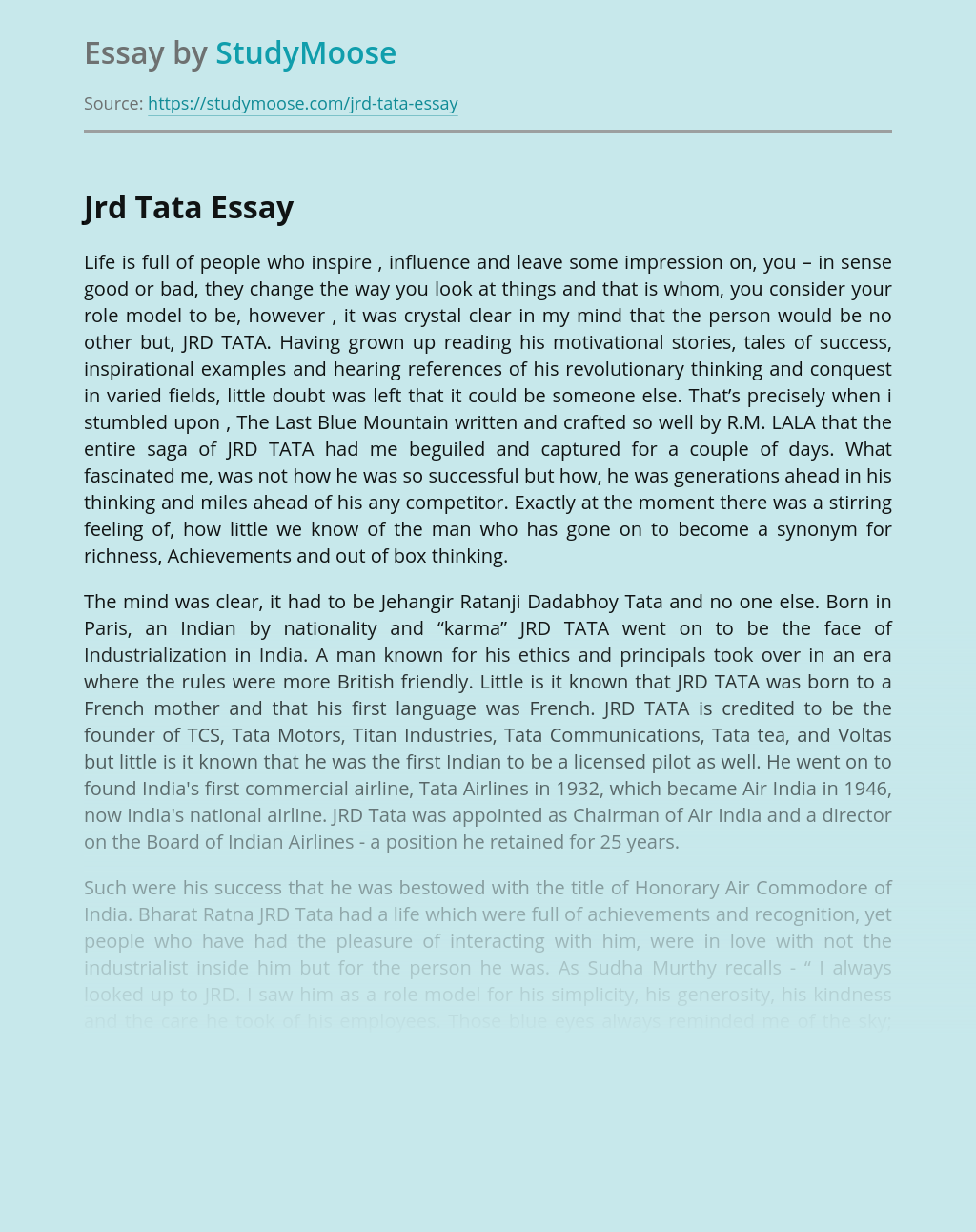