Explore the ways in which Sheriff presents the character of Stanhope

“How is the dear young boy? Still drinking like a fish, as usual?” The character of Stanhope is introduced by Hardy in Act 1, without him actually making an appearance. Osborne shows respect to Stanhope and is clearly angry and annoyed by the way Hardy is dismissive of Stanhope’s ability. Already, we are presented with two contrasting views of Stanhope. By considering the way in which both characters discuss him, we can address the question of whether or not Stanhope possesses heroic qualities.

Turn in your highest-quality paper
Get a qualified writer to help you with
“ Journeys End – R.C.Sherriff – “Character of Stanhope” ”
Get high-quality paper
NEW! AI matching with writer

The play depicts the horror of trench warfare; it gives us an insight into what life is like in the war, the reality of the war and the reality of heroism. Heroism is to show great courage and bravery. A lot of men in the war signed up because when the war was over they wanted to be seen as a hero. None of these men had any idea about the reality of the treacherous conditions in the trenches.

R.C Sheriff wanted to dispel the myths about the horrors of the war and address how real men survived; the heroic men. In this essay, I am going to analyse Act 1 and Act 2, scene 2. I will look at the ways in which Sheriff uses language, stage directions and dramatic devices to present the character of Stanhope and I will address the question as to whether or not Stanhope possesses heroic qualities.

In Act 1, the character of Stanhope is introduced.

This has a major impact on the audience. It builds up tension for stanhopes arrival and provides the audience with valuable information about the character of Stanhope. Hardy shows disrespect towards Stanhope, for the simple reason that he ‘likes a good drink’. Osborne is indignant over these comments and continually informs Hardy of his dedication, loyalty and perseverance. “Oh he’s a good chap” Hardy says this in a patronising manner, dismissing his abilities as a leader. He does not share the same respect but instead uses Stanhope’s values as an amusement. He was particularly amused at the fact that Stanhope missed his leave. He put it down to the reason that he did not want to show his family the drunkard state he was in.

Maybe, the actual reason is that he is so loyal to his men that he does not want to abandon them. Osborne repeatedly defends Stanhope and emphasises the fact that he had seen him suffering all day, physically and mentally, then out on duty all night. “Young Stanhope goes on sticking it, day in and day out” This comment recognises Stanhope’s quality of loyalty, commitment and overwhelming mental strength. It is for these qualities that could describe Stanhope as a hero. Sheriff’s purpose of including this scene in the play is to present the audience with two contrasting views of Stanhope. By doing this, he heightens the eager anticipation and curiosity. The audience are left to develop their own opinion on the character of Stanhope.

In Act 1, scene 1, Sheriff presents the audience with another characters opinion of Stanhope. We can see that Raleigh is very enthusiastic and keen to talk about Stanhope. Dramatic devices are used to create an alternative perspective if Stanhope.

His reactions to Osborne’s comments show that he highly respects Stanhope and is in total awe of him. He looks up to Stanhope as a kind-of role model. ‘He looked splendid in it’, Raleigh’s language used to describe Stanhope suggests that he worships him. He uses words like “splendid” and “amazing” and “terrific”. This shows his excitement and wonder at being placed under his command. The scene on a whole shows Stanhope as a hero figure. Raleigh is in awe of him like a school boy idolises an older student.

In Act 2, scene 2, Hibbert is taken aback when Stanhope admits to suffering from neuralgia also.

Hibbert: This neuralgia of mine. I’m awfully sorry. I’m afraid I can’t stick it any longer

Stanhope: I know it’s rotten isn’t it. I’ve got it like hell

Hibbert: (taken aback) you have?

In this scene we do not know whether Stanhope is actually suffering from neuralgia. However, it seems apparent to believe that he is from the earlier discussion of hoe Stanhope deals with pain. Hibbert is using this illness as an excuse to leave. If Stanhope is suffering from neuralgia too, then why should one leave and not the other? Stanhope takes away Hibberts excuse to leave- the fear of life the trenches. Stanhope does not want one man to jeopardise the lives of others around him.

Stanhope shows control and authority by saying this. He stands his ground and is firm in his words, but at the same time is calm and composed. This shows his natural skill as a leader and strength to keep his men together. In this sense Stanhope can be described as showing heroic qualities, fidelity and compassionate love to all under his command.

With the use of dramatic devices, the character of Stanhope is introduced to the audience. Throughout the play, Sheriff continually uses these techniques and we are left feeling totally in awe of Stanhope’s fine comradeship, born leader skills and compassionate love to all in his battalion. Although Stanhope “likes a good drink” his weaknesses are overlooked by his dedication, loyalty and perseverance. Stanhope has suffered the dreadful conditions of trench warfare but still “goes on sticking it, month in, month out”. In the eyes of his men “there isn’t a man to touch him”. 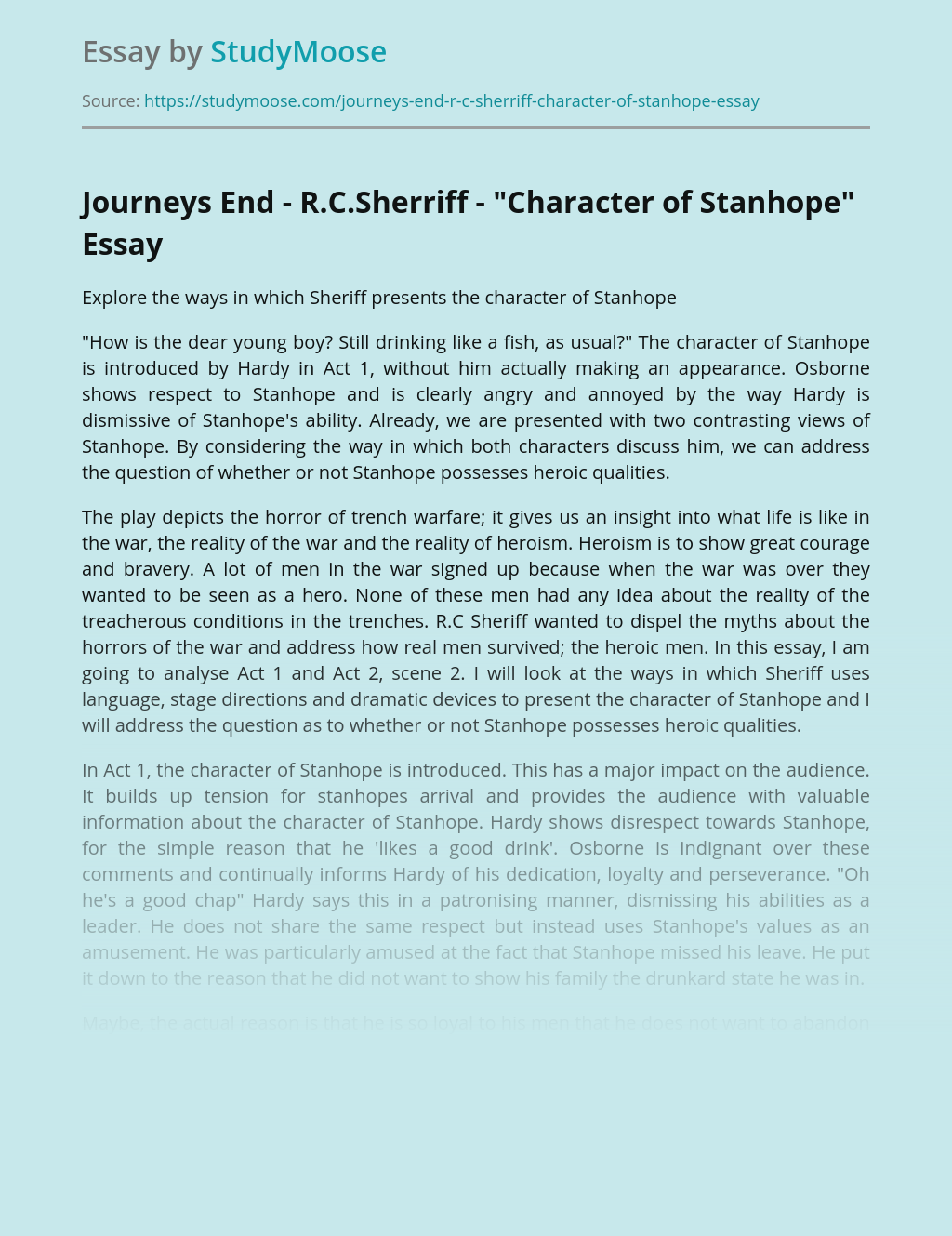 Turn in your highest-quality paper
Get a qualified writer to help you with
“ Journeys End – R.C.Sherriff – “Character of Stanhope” ”
Get high-quality paper
Helping students since 2015
Stay Safe, Stay Original