Joseph Conrad was 'a bloody racist

This is the quote – ‘The conquest of the earth, which mostly means taking it away from those who have a different complexion or slightly flatter noses than ourselves, is not a pretty thing when you look into it too much’ This, I believe effectively tars colonialism and conquest with the same brush as he is describing colonialism while saying conquest. I feel he is saying that the two are indestinguishable and that anybody who can define them is stuck on ‘the idea’ he goes on to mention – ‘…

belief in the idea – something you can set up, and bow down before’ I think he is saying that as long as people can hide behind the idea of colonialism and tell it apart from conquest they are happy but in essence the two are the same.

Don't use plagiarized sources. Get your custom essay on
“ Joseph Conrad was ‘a bloody racist ”
Get custom paper
NEW! smart matching with writer

Conrad might be saying that although we live in a civil age we are no different to the Roman conquerors. I believe this shows that Conrad is not racist as he is saying that ‘taking away’ the earth ‘from those who have a different complexion or slightly flatter noses than ourselves’ is wrong.

This is a very anti-racist statement and Conrad would have been saying something way ahead of his time. Marlow is a mouthpiece for Conrad in the sense that they have experienced the same things to the extent where even the characters names are the same – When in the Congo, Conrad took over a steam boat formerly captained by a man called Frieslieben (Fresleven in the book), and he had to go and retrieve a man called Kurtz (same name, also in the book).

– In another book when asked of the likenesses between him and Marlow he said. ‘It is experience pushed a little (and only very little) beyond the actual case for the perfectly legitamate… ‘ I think that any reader thinking that Marlow and Conrad are one and the same would be virtually correct. This means in my view that any likenesses and quotes that Marlow does or says can be directly linked to what Conrad believes in, therefore it is not a factor of how similar the two are as I see them as one entity.

When Heart of darkness first come out in 1899 (serialised in Blackwood’s magazine) it was in an age where the western world was scrambling to colonise many African countries, where England was fighting a second Boer war and were supreme in North Africa, and it was a time when Joseph Conrad was putting his reputation and respect as an author on the table. His contemporaries could easily have dismissed his book as modernistic drivel and slated him for his uncontemporary views.

In this light we see that Conrad’s book was way ahead of its time, exploring racism and both physical and mental journeys – into the congo and into one’s self. I believe it could be said that Conrad was not racist even if there is an inkling of racist assertions in Heart of darkness because this racist view was accepted at the time, this can be said of his usage of the word ‘nigger’ in his novel (one of his earlier novels even had the word “nigger” in its title – “the nigger and the narcissus” 1897) but as this was regularly used at the time it can be wavered as it didn’t have the effect it does in today’s society when spoken.

Apart from this I think it is clear that Joseph Conrad did not conform in a racist society and had seen the horror and pure incorrectness of colonialism first hand. I have shown that Conrad and Marlow are one and the same and have been led to the conclusion through close reading of the opening of heart of darkness that Conrad is not, as Chinua Achebe states, ‘a bloody racist’. In fact I believe the opposite statemen could be made – “Conrad was a minority voice speaking out against racism through his character Marlow in a time where racism was rife”.

I believe I am right because the evidence against Conrad is scarce and what little textual evidence there is can mostly be put down to ignorance which in my opinion can be let go, due to the fact that his overall message is an anti-racist one. I feel people who think that Joseph Conrad is racist based on Heart of darkness is wrong because of the reasons stated. Show preview only The above preview is unformatted text This student written piece of work is one of many that can be found in our GCSE Joseph Conrad section.

Joseph Conrad was 'a bloody racist. (2017, Nov 03). Retrieved from https://studymoose.com/joseph-conrad-was-a-bloody-racist-essay 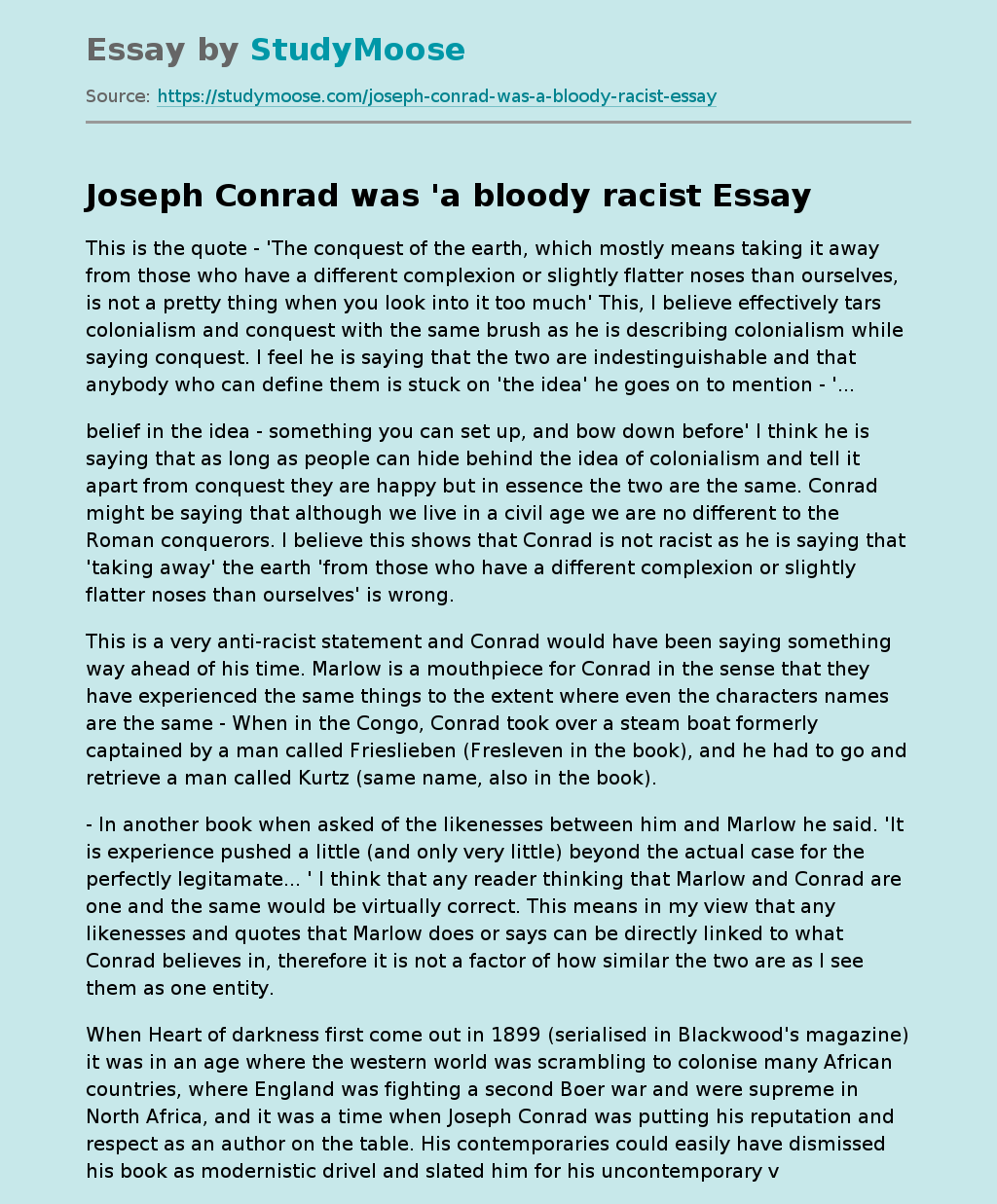