Family and Early life He was the seventh child in a family of 11 children (2 boys and 9 girls). His parents went to school and were well known. His father, Francisco Rizal Mercado, worked hard as a farmer in Binan, Laguna. Rizal looked up to him. His mother, Teodora Alonso Realonda y Quintos, was born in Meisic, Sta. Cruz, Manila. She read a lot and knew about art and many other things. Rizal said she was loving and very smart. He learned the alphabet from his mother at the age of three.

Don't use plagiarized sources.
Get Your Custom Essay on Jose Rizal Life and Education Just from $13,9/Page

At age five, while learning to read and write, he also showed that he could draw and paint. He surprised his family and relatives with his pencil drawings and sketches and with his moldings of clay. ————————————————- Education In 1877, at the age of 16, he finished school (Bachelor of Arts) from the Ateneo Municipal de Manila. In the same year, he went to another school to study Philosophy and Letters at the University of Santo Tomas.

At the same time, he took classes to become a surveyor and assessor at the Ateneo.

In 1878, he went to the University of Santo Tomas to become a doctor. He stopped in hisstudies when he felt that the Filipino students were not being treated right by the priests who were also their teachers. On May 3, 1882, he went by boat to Spain. In Spain, he continued his studies at the Universidad Central de Madrid. On June 21, 1884, at the age of 23, he got his degree and became a doctor. On June 19,1885, at the age of 24, he got another degree in Philosophy and Letters. Having traveled throughout Europe, America and Asia, he spoke 22 languages.

Political Life He hoped to make political changes in his country and to make the Filipinos go to school. Rizal wrote many poems and books that show his love for his country. In March 1887, his book, Noli Me Tangere was published. It shows the bad habits of the Spanish priests. El Filibusterismo, his second novel was published on September 18, 1891. It is sadder than his first book. Rizal was not liked by those in power. He showed the bad things done by the priests and the people in the government and this led him and his relatives into trouble.

Because of this, he and those who he knew were being watched by the government. They were making up bad things against him. He was put to jail in Fort Santiago from July 6, 1892 to July 15, 1892. They said that papers with words he wrote against priests were found in the luggage of his sister Lucia who arrive with him from Hong Kong. He was made to stay in Dapitan and there he did farming, fishing andbusiness. He also operated and worked in a hospital. He taught the English and Spanish languages and the arts. ————————————————- Later Life and Death.

When the Philippine Revolution (the war of Filipinos against the Spaniards) started on August 26, 1896, his enemies went after him fast. They were able to get people to say bad things against him and linked him with the war. He was never allowed to talk to these people. Because the Spanish authorities thought he was responsible for the activities of the revolutionaries, he was exiled to the city of Dapitan in Zamboanga, in Mindanao (Southern Philippines). From November 3, 1896, to the date of his death, he was again held at Fort Santiago. In prison, he wrote a poem with no title.

It is now called Ultimo Adios and became a famous poem in the Philippines. It expresses the hero’s great love of country as well as that of all Filipinos. After a trial by the military authorities, he was convicted of rebellion (going against the government), sedition (making trouble) and of forming illegal association (meeting not allowed by the government). He was executed (punished by killing) by guns fired by soldiers on December 30, 1896 at Bagumbayan Field. He was 35 years old at the time of his death. His death place is now a national park (now known as Luneta), and a monument has been constructed in his honor. 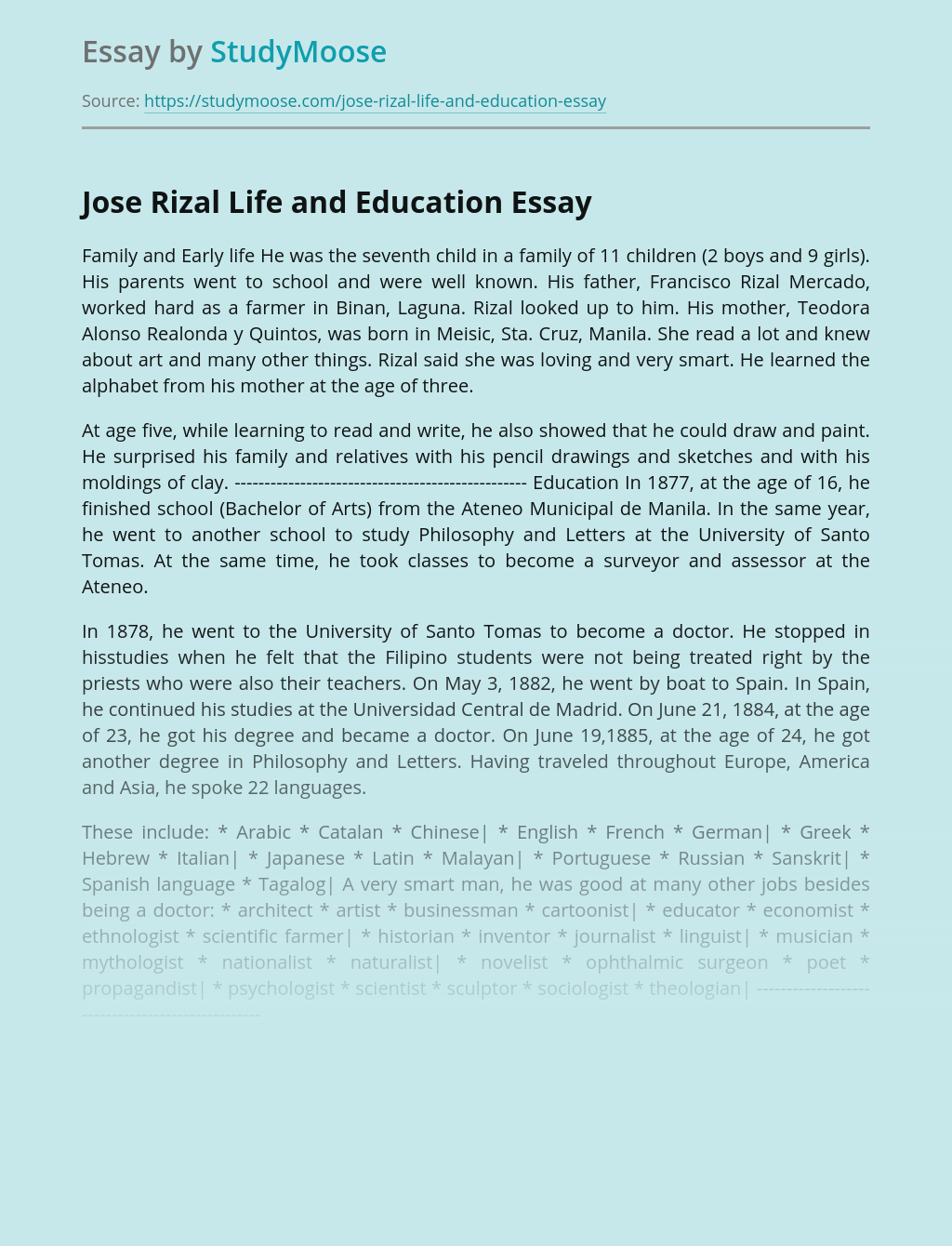 Education is one of the most important things for a society to prosper and be safe which forms the character and intelligence of the individuals around the world. Education makes one able to understand what is happening in the world logically and clearly. Education enables individuals to put their potential to use and make a...

View sample
The Right To Education As A Human Right Education

Historically, due to our post-colonial background, that of the plantation society, education was just managed to the white, upper class people. In order to establish and reinforce a hierarchy of power and ownership, wealthy capitalists made sure premium education for their children, while actively excluding members of the lower classes from this luxury. Due to...

Every school in the world has its own regulation about the way to wear. Some schools require students to wear the uniform, while some allow them to wear casual clothes. Besides, many people think that students should wear casual clothes to feel comfortable when studying. However, in my opinion, wearing school uniforms is better for...

View sample
Rizal as a Teacher

Rizal had his early education in Calamba and Binan. It was a typical schooling that a son of an ilustrado family received during his time, characterized by the four R’s- reading, writing, arithmetic, and religion. Instruction was rigid and strict. Knowledge was forced into the minds of the pupils by means of the tedious memory...