Introduction John Wesley was an ordained minister of the Anglican Church in England in the eighteenth century. He is considered as the founder of the Methodist movement. The Methodist movement started out at Oxford University where John Wesley, his brother Charles and other like-minded individuals began gathering together for prayer and for religious purposes through what they called the “Holy Club”. They practiced discipline in observing the sacraments of the church; they conducted regular outreach programs designed for the elderly, the prisoners, the sick and other disenfranchised members of the society (Pollock, 1989).

Don't use plagiarized sources. Get your custom essay on
“ John Wesley’s Thoughts on Slavery ”
Get custom paper
NEW! smart matching with writer

Although the Methodist movement floundered in England during the time spent by John Wesley in Georgia in America, it gained new strength upon his return in the 1740s. Because of his new found fervor upon hearing Martin Luther’s preface to the Book of Romans, he began his itinerant preaching and traveled extensively throughout England preaching about the Christian faith (Pollock, 1989). John Wesley and Slavery John Wesley was opposed to debauchery and the drinking of wine.

In addition, his sermons and his writings were also opposed to slavery.

When Wesley was in the British colony of Georgia, he saw the way that masters treat their slaves as well as the way in which these slaves were sold as cattle. In 1774, John Wesley published one of his reflections entitled Thoughts on Slavery. On this pamphlet, he expounded on the slave trade—how the slaves were taken from their native lands and transported to the New World to provide important workforce for the plantations.

He condemned slavery as an act which cannot be reconciled with Justice and Mercy (Brycchan Carey, 2002).

In the said pamphlet, John Wesley appealed to both slave-traders and slave owners to stop the practice and he closed with a written prayer for their soul. In this address to the slave-traders, Wesley’s accusations and dispensations were impassioned and unrelenting. He lamented the lack of compassion in the slave traders because of the way that they treat the slaves (Brycchan Carey, 2002). Wesley’s opposition to slavery even led him to commit his support to the Abolitionist movement. The abolitionist movement grew in power and magnitude towards the end of the 1780s.

At this time, John Wesley risked his personal safety by preaching on the matter of slavery and condemning such practice in Bristol, which was then a trading port for slaves. During this sermon, there was uproar among the people, which Wesley described in supernatural terms as the way that Satan fights for his kingdom. This uproar, however, could have been caused by the slave-traders whose operations were just around the area where John Wesley was preaching (Brycchan Carey, 2002). Conclusion Until the end of his life, John Wesley fervently condemned and opposed slavery.

The pamphlet he wrote about his Thoughts on Slavery was published once more before he died. His anti-slavery stance was carried on by the followers of the movement he founded—Methodism. As the Methodists continue to gain strength and following all throughout England, and later in the United States, Wesley’s thoughts on slavery became even more popular and added momentum to the move to abolish slavery. 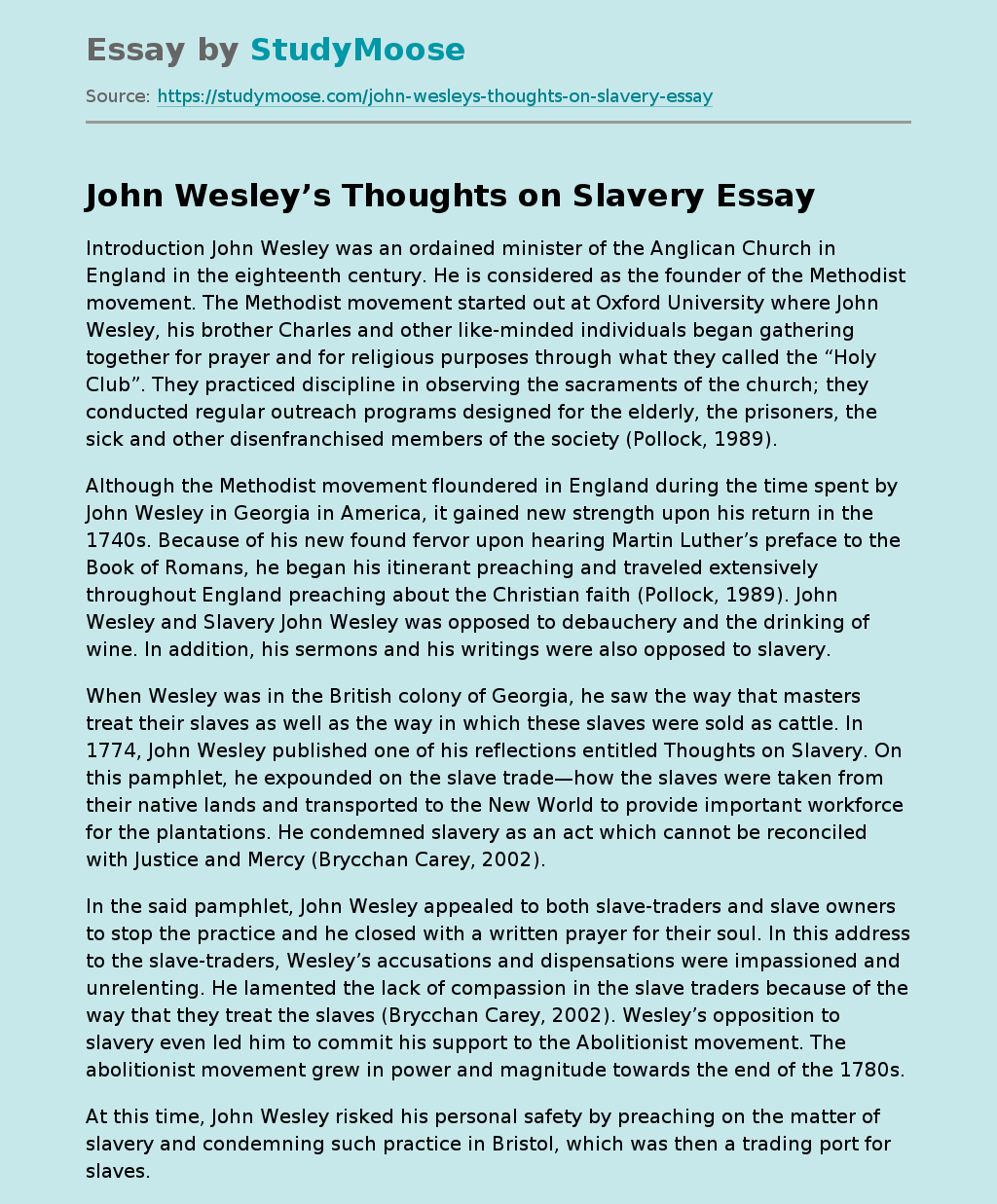