“On First Looking into Chapman’s Homer” by John Keats is a poem widely recognised by critics as a pivotal moment in his development as a poet; this work is evidence of his complete mastery of the sonnet form (of which he wrote 64 in total). This poem was a key evolutionary process which would help him construct the development of his own poetic legacy: the Great Odes.

Keats was enthralled by the sonnet form because it presented a challenge: to concentrate thought provoking philosophy concisely enough to fit into fourteen lines.

Don't use plagiarized sources. Get your custom essay on
“ John Keats “On First Looking into Chapman’s Homer” ”
Get custom paper
NEW! smart matching with writer

He restlessly experimented with both verse and meter, and though he worked with Petrarchan structures he found them to be unsuitable for the English tongue, and began to favour the Shakespearian form instead. Never the less, Keats achieves technical perfection in this Petrarchan structured poem. The first part of a Petrarchan sonnet, the Octet (eight lines), usually serves as a question or presents a problem to be then followed by an answer or a solution in the Sestet (six lines).

However, Keats subverts this traditional structure to instead aid a before and after response; in this case the Octet ponders his travels and knowledge before Chapman’s Homer, while the Sestet then contrasts his enlightening experience of finally reading it. This poem is a brilliant testimony of the profound effect of poetry on Keats – it was composed in a vivid, ephemeral moment of crucial inspiration during the ardent elation he experienced straight after reading Chapman’s Homer, and so powerful was this stimulation that the whole poem was finished in day.

Keats establishes his utter admiration for Chapman and Homer in the opening lines;

Much have I travell’d in the realms of gold,
And many goodly states and kingdoms seen;
Round many western islands have I been

The initial exclamatory statement asserts gallantly that he is a scholar of high art and literature. He immediately introduces the central and recurring metaphors of exploration and discovery – the idea of travelling and cluster of locations: travell’d, realms, states, kingdoms, islands all emphasise the diversity of experiences brought by the power of art and imagination. The phrase “Realms of Gold” symbolises the world of imagination. Keats believes that art can open the mind to new worlds and experiences.

The word choice of “gold” shows just how rich and rare these experiences are, and also alludes to the search for gold of the Spanish conquistadors, linking to his reference to Cortez in the Sestet. This also reflects his hunger to be exposed to more and greater works. The repetition of the “l” sounds in “travelled”, “realms”, and “gold” emphasises the idea and ties the words together. The frequent and insistent use of first person narrative also reinforces the extent of Keats own personal knowledge; how well travelled and widely versed he is, and therefore we understand his epiphany upon reading Chapman’s Homer is well informed and trustworthy.

The fourth line moves away from those who enjoy art, to those who actually create it; “Which bards in fealty to Apollo hold.” The high, even sacred function that poets fulfil is indicated by their being the servants of a god, Apollo, and having sworn to follow him (with the suggestion that they have consecrated their lives to him). “Fealty” indicates their dedication to Apollo and consequently their calling – the creation of poetry.

Keats continues on to expand on those who create art rather than those who appreciate it, narrowing down to one particular poet who rules the realm of poetry, and who was his main inspiration to rise above other dedicated poets;

“Oft of one wide expanse had I been told
That deep-brow’d Homer ruled his demesne;
Yet never did I breathe its pure serene”

Again, the metaphor of travel and discovery is expanded. Keats is reinforcing the vastness of Homer’s legacy and his admiration – not only was it rich, but prolific, a trait which he very much wanted to emulate. To emphasise the extent of Homers genius and his literary accomplishments, Keats modifies “expanse” (which means extensive) with an adjective which also means “extensive”, “wide”, to reinforce how limitless his intellect was. “Deep-browed” also refers to Homers intellect – we still use “deep” as a colloquialism today e.g. “deep thoughts” “deep thinker”.

To Keats, Homer is majestic as he “rules” with complete authority over the world of literature. By breathing in the “pure serene” he shows that art, to him, is a necessity, an essential part of his life that he cannot live without, like oxygen. He also makes it part of himself; absorbing it shows the extent to which he is devoted to art – he literally lives and breathes it. His use of an adjective in place of a noun “pure serene” is evidence that he struggled within the restrictions of our language, which would eventually prompt him to move onto Shakespearian formed sonnets.

The line “Yet never did I breathe its pure serene” also contrasts with following and last line of the Octet; “Till I heard Chapman speak out loud and bold:” These lines contrast Keats’s knowledge of Homer’s reputation with his experience of the genius of Homers poetry in Chapman’s translation. “Out loud and bold” reinforces the vitality of the epiphany achieved and is contradictory to the previous calm “serene” mood that Keats was previously in.

We associate the words “pure” and “serene” with something neutral, peaceful and relaxing – these words apply both to the original poetry of Homer and the translation by Chapman. “Serene” also conveys Keats spiritual fulfilment, as previously he was in emotional turmoil and distress. This last line of the Octet “Till I heard…” prepares us for the Volta and brings the Octet to a swelling crescendo; until this moment, he has felt excluded from entry to a new world of enlightenment and truth.

The Sestet begins with “Then”, seamlessly transitioning from the Volta and preparing us for the impact of reading Chapman’s Homer.

There is also particular emphasis in all things visual in this section;

“Then I felt like some watcher of the skies
When a new planet swims into his ken;
Or like stout Cortez when with eagle eyes
He star’d at the Pacific – and all his men

The emphasis on all things visual – “watcher”, “eagle eyes”, “star’d” – reinforces the power and strength of Keats’s imagination and devotion to his poetry; he is easily able to relate his epiphany to the experience of discovering uncharted waters, or being the first to spy a new planet.

The relentless excitement and pure awe-inspiring experience that Keats is undergoing is only comparable to discovering something fresh, new, and undiscovered, just as he feels he has discovered a whole new world of knowledge so vast that it includes the heavens – “new planet…”. The use of the two separate metaphors is interesting, as Keats appears to favour the explorer metaphor over the astronomy metaphor.

This metaphor alludes to the fairly recent discovery of the planet Uranus, which is a wholly visual experience and seemingly perfect for the elation Keats is trying to convey. “Swims” alludes to the upcoming ocean metaphor. However, to Keats, this outer space knowledge has not been acquired actively enough, and he quickly abandons the astronomy metaphor in favour of the explorer metaphor. This is more satisfying, as this discovery was made actively and on earth rather than in space: the discovery of a new planet will never be truly satisfying as it will always be out of reach and therefore we will only ever have basic, rudimentary knowledge.

This is also a very visual experience, and Keats emphasises Cortez’s eyes by calling them “eagle eyes”. This suggests that Cortez’s eyes are keen, observing strongly and are paying close attention to detail, just as Keats thoroughly observed all of Chapman’s Homer, so much so that he felt as though he was breathing it in and literally surviving though it.

The fact that Cortez is said to “Stare” also reinforces how entrancing and enthralling the sight of the ocean was for him, just as Keats was hypnotised by Chapman’s Homer. By deliberately choosing the discovery of an ocean over a planet, Keats emphases his view point that we only have access to a finite, limited bank of knowledge. The sea is also a method of transportation, just as Chapman’s Homer is the vehicle for Keats’s own discovery.

The last two lines reflect the shock and awe of Cortez and his men upon discovering the ocean, similar to Keats’s current amazement;

“Look’d at each other with a wild surmise
Silent, upon a peak in Darien.”

The discovery of the ocean is so surprising and unexpected that Cortez’s men, as well as himself, as shocked into silence and dumb-stuck speechless. “Surmise” implies that they were confused, unsure, but alongside “wild” Keats word choice conveys that their shock was excitement induced, their reactions are feral, natural and almost untamed in nature. The imagery of Cortez and his men standing “silent” and in awe is a stark contrast to the previous booming, “loud and bold voice” in the Volta which prompted Keats’s epiphany.

This represents the come down from the white hot excitement upon first reading Chapman’s Homer, to the quiet, pensive, yet still dumb-stuck speechlessness Keats would later on experience. Again, Keats is conveying that the English language is limiting and reluctant to allow you to fully express and communicate the impact of profound moments such as this. This shows frustration with Keats medium of choice.

Keats has created an uplifting and thought provoking sonnet which encourages and inspires us to seek beyond the knowledge we have already gained, and to always aspire for more. This sonnet is so technically praised because not only is the content inspiring, but his appreciation of verse form and meter have been demonstrated faultlessly through out to create a satisfying piece of art in a mere fourteen lines.

The error Keats made in mentioning Cortez as the discoverer of the Pacific Ocean indeed does not detract from the overall meaning of the poem – names are almost irrelevant, it is the actions and accomplishments that are so potent in his work. What is important is human truth, not historical accuracy, and Keats has once again created a work of enormous ambition that reflects the importance of knowledge and discovery, no matter how big or small. 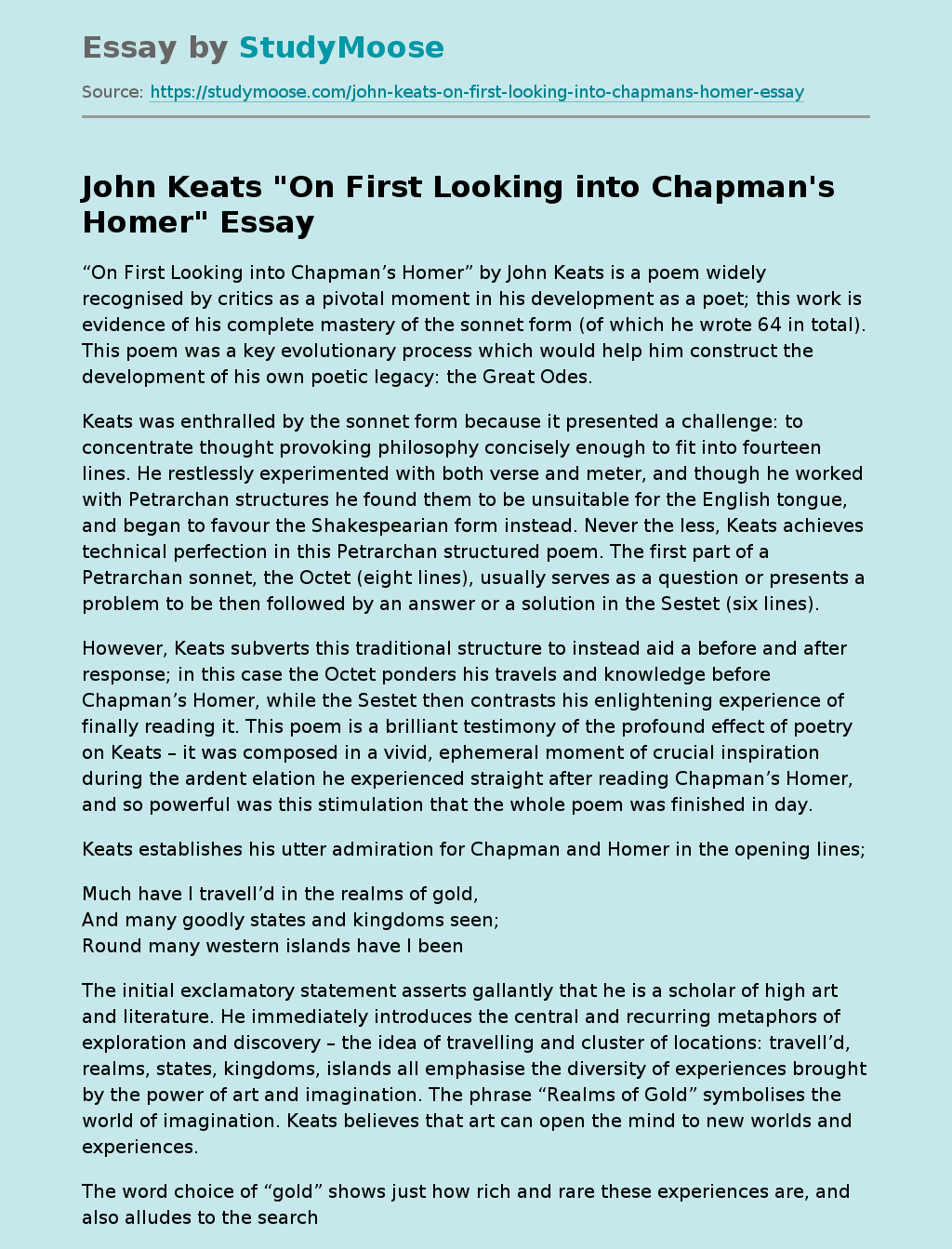