Jessie Pope’s treatment of the subject of war strikingly contrasts to the anti-war poet Wilfred Owen. Pope’s poetry appears to take a carefree approach, however, is in fact very brutal when compared to Owen’s.

In Jessie Pope’s ‘Who’s for the Game?’ there is extensive use of rhetorical questions to persuade and pressure British men to enlist. For instance, she writes, ‘Who’ll grip and tackle the job unafraid?’ Pope is addressing all young men and is therefore challenging their masculinity; anyone who does not join will be perceived as a coward.

Don't use plagiarized sources. Get your custom essay on
“ Jessie Pope and Wilfred Owen ”
Get custom paper
NEW! smart matching with writer

Pope also utilises a litotic phrase, ‘It won’t be a picnic…’ deliberately for rhetorical effect. War effort is much more than a ‘picnic’ but by understating the First World War she is convincing the nation that extreme difficulties did not lie ahead.

For much of the poem, Jessie Pope uses the simple rhyming scheme ABAB and unlike Owen’s sophisticated and complex way of writing, the lines read like a chant and so would be easy to relate to a younger audience that she is aiming at.

Consequently, her poem is jingoistic and much easier to remember than Wilfred Owen’s. Owen’s poem was aimed at individuals high in society who had the power to make a difference which is why it was written in Latin. The Latin phrase can also be changed and rearranged to make sense and mean exactly same like war itself. War can be changed but it will always be futile.

Furthermore, Pope also uses a less than formal tone with colloquialisms such as ‘lads’ in an endeavour to appeal to her audience. This also makes her sound friendlier and not aggressive.

Pope employs conceit throughout the entire poem, ‘Who’s for the Game?’ and governs her poetic message through doing so. Pope invites the reader into a more sophisticated and supposed awareness by comparing, juxtaposing war and manipulating images that reader already has of ‘the game.’ Comparing war to a ‘game’ is shocking to a present day audience who knows the truth of war and that it is nothing like a ‘game’ which implies that there is very little danger at war.

However, at the time the poem would have acted as a form of propaganda to convey her beliefs. Pope’s message is ostensible: young men have the responsibility of serving their country and that war is in fact exhilarating and the worst that will happen is that they will return home ‘with a crutch.’ This reinforces the fact that war is supposedly like a sport where a players injuries only result in a player breaking a leg at most. In contrast, Owen reveals the true reality through his illuminating and evocative imagery in ‘Dulce et Decorum Est.’

Wilfred Owen’s poem is presented as a vignette from the front lines of the First World War and in this case British soldiers who are attacked with gas. Owen describes the gruesome effects the gas has on a man. He says, “If in some smothering dreams you too could pace behind the wagon…” The word ‘dreams’ is use of litotes because they are in fact nightmares and this therefore normalises the way he lives life in the war. It also suggests that if his audience were to experience his nightmares which were in fact reality, they may no longer believe the mendacious ode: Dulce et Decorum est Pro Patria Mori. Prior to this line, Owen capitalises the word ‘lie.’ This could be interpreted to be because pro-war propaganda was so imposing and dominating in Britain at the time and it was many peoples belief that it was fact. Ironically, Owen is arguing the opposite. The last rhyming couplet ‘glory’ and ‘mori’ makes the poem’s meaning and purpose ambiguous depending on the pronunciation, determining whether the structure is irregular or regular. Regular would suggest routine and that he wants the war to continue and irregular would suggest that he wants all wars to come to a halt.

Reinforcing the fact that Wilfred Owen had recurring nightmares about the gas attack he uses gerund and therefore present continuous tense. For example, ‘guttering, choking, drowning…’ Owen cannot forget what he has witnessed. Moreover, he also used sibilance when he writes, “my helpless sight.” This cleverly imitates the sound of gas.

Owen also used juxtaposition when he writes; “Ecstasy of fumbling.” Owen would have been feeling anything but ecstatic and therefore highlighting what would have been misery. It also described the controlled panic and shows how he was awakened with heightened awareness and how he had to find helmet in a matter of seconds.

In the last stanza, Owen becomes more uses iambic pentameter on most lines providing a steady rhythmic beat. Ironically, iambic pentameter is usually reserved for love and in this stanza he was initially addressing Jessie Pope who did not like her propagandistic poetry and what she stood for. 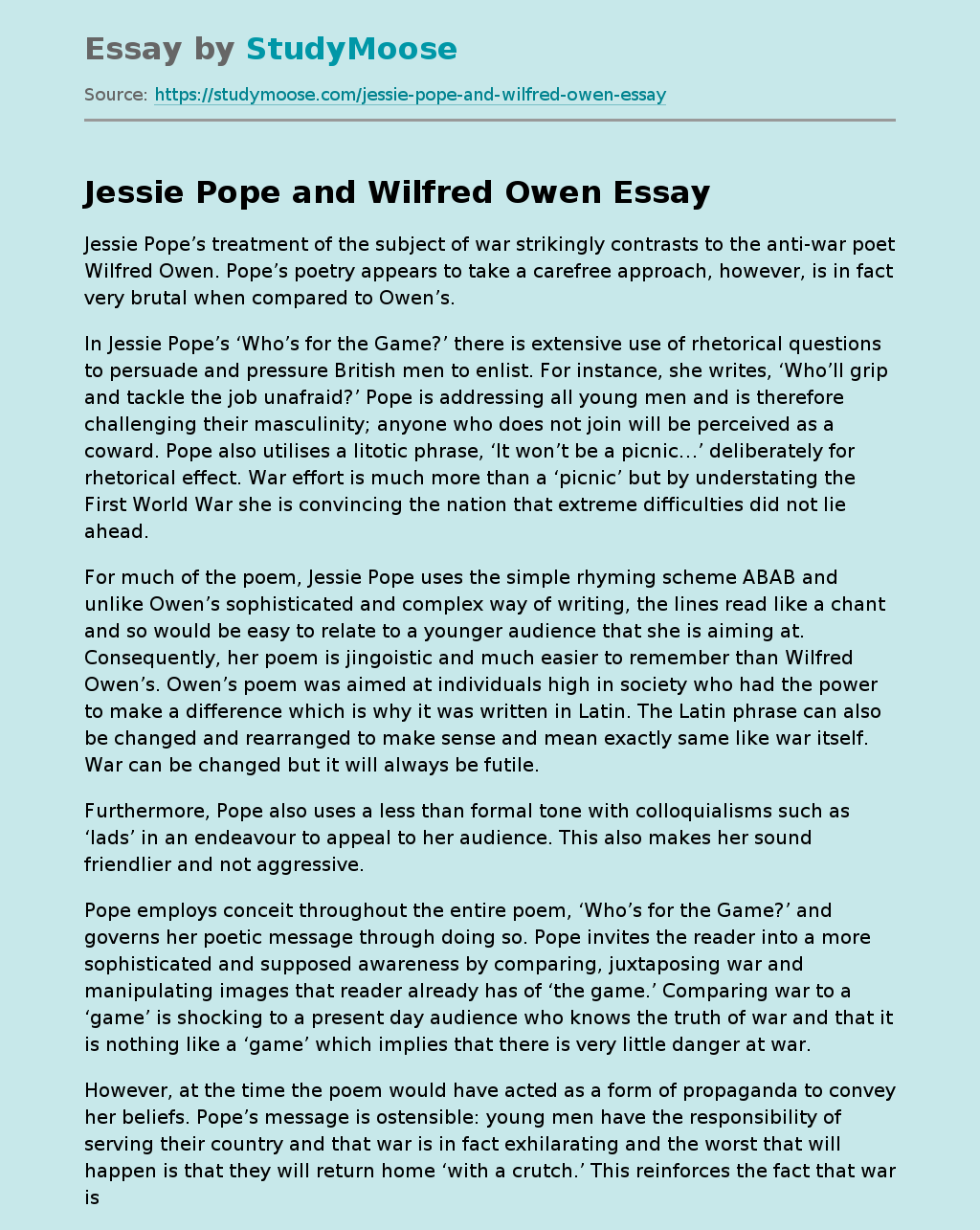