An analysis of "Who’s for the Game?" By Jessie Pope

War is a highly debatable topic that has influenced many poets. An issue that is important in Jessie Pope’s 1914 poem Who’s for the game? This essay will explore a range of literary devices used within the poem to help analyse the explicit and implicit meanings. Furthermore, it will use appropriate literacy terminology to back up quotes within the poem. Additionally, this essay will analyse the structure of the poem to show how meaning is conveyed. Pope, a naive poet, speaks of a highly debatable topic known to man.

Turn in your highest-quality paper
Get a qualified writer to help you with
“ An analysis of “Who’s for the Game?” By Jessie Pope ”
Get high-quality paper
NEW! AI matching with writer

However, she makes reference to the war as being a game, she suggests that it is “The biggest that’s played” though, she does not anticipate the destruction which war may bring. The poem is reliant on propaganda which relied heavily on men’s guilt. It could be seen that this encouraged men to fight and defend their county. This is shown through a literary device, a metaphor. An example being, “And who wants a seat in the stand” the use of this device prominently states that spectating the war will result in deepest regret because they are not defending their country.

It could be suggested that the emphasis of the metaphor helped influence men’s participation in the war. Arguably, though Pope promotes the so called glory of war, it is seen that not protecting their country could result in an invasion. Here, Pope addresses that without soldiers at war, their country could be destroyed. Alternatively, Pope makes use of personification indicating the realism of war.

She writes, “Your country is up to her neck in a fight”. Here, the poet personifies their country as a woman, implying that the war is at its most extreme. This addresses the men that their country needs them the most at this point in time. In contrast, it is clear that the implicit meaning of this literary device exposes the brutality of war, vicious and scary. Jessie Pope has written her poem in a conversational manner making “Who’s for the game?” memorable and persuasive to the readers. The poet has also made use of a metrical rhythm throughout the entire stanza’s.

Furthermore, the poet has made use of rhetorical questions throughout the first three stanzas. She emphasises the word “Who”, an example being, “Who’s for the game?” Pope has used the word to present the invitation of recruitment to men. It is seen that these specific questions are without a doubt persuasive, and have encouraged men of all ages to fight in the war. Throughout the third stanza, it can be seen that Pope has replaced aggressive words with more light hearted descriptions. She speaks of “Picnic”, a known and enjoyable experience. However, Pope has used the implicit phrase in an informal manner raising the awareness that war is difficult and unpleasant. The structure of the first stanza has a three syllable foot with the first two syllables unstressed and the third one stressed.

Similarly, throughout the last three stanzas the poem misses some of the unstressed syllables but the effect of the stressed syllable is predominate. The final line “And she’s looking and calling for you” draws heavily on the promotion for recruitment. The significance of “she” refers to the war as an animal being discussed. Having analysed the literary devices, terminology and structure in Who’s for the Game? It is seen that the entire poem draws heavily on men’s guilt who want to protect their country and family, although they are afraid. Pope certainly glorifies war within this poem, thought she raises false hopes for the wrong reasons. The whole poem is justification of the brutality faced when at war.

An analysis of "Who’s for the Game?" By Jessie Pope. (2016, Oct 07). Retrieved from https://studymoose.com/an-analysis-of-whos-for-the-game-by-jessie-pope-essay 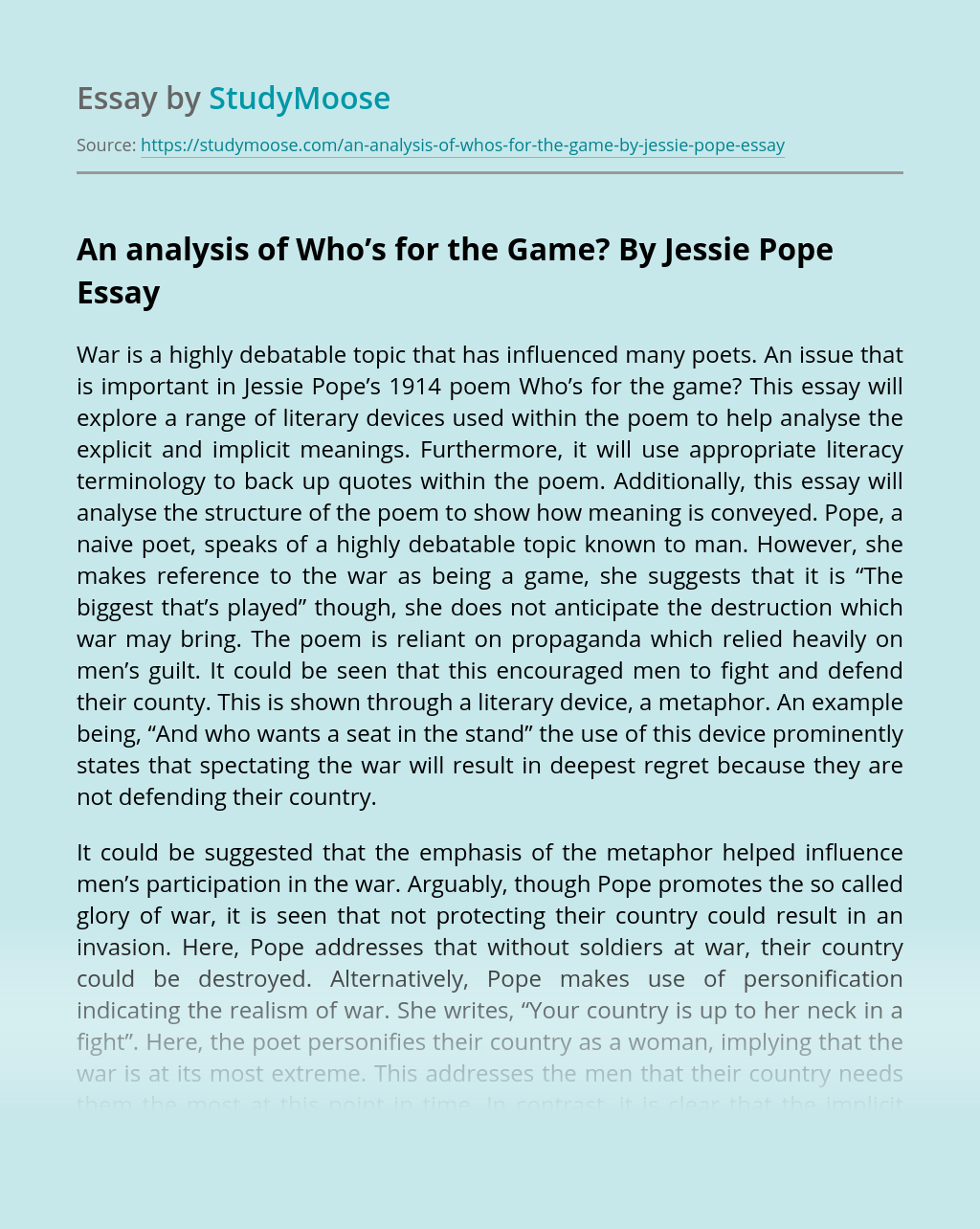 Turn in your highest-quality paper
Get a qualified writer to help you with
“ An analysis of “Who’s for the Game?” By Jessie Pope ”
Get high-quality paper
Helping students since 2015
Stay Safe, Stay Original