Jefferson vs. Hamilton: Confrontations That Shaped a Nation

The book by Noble Cunningham seeks to showcase the contrasting ideas employed by Thomas Jefferson and Richard Hamilton in pursuit of forming and building the American nation. It offers analysis and insight surrounding their perceptions on how the country should be governed. The book copies excerpts from the two’s compositions and writings which can make readers appreciate and understand their points of view surrounding the issues of planning, implementation and issues surrounding the period of 1787-1804.

On one hand, we see Alexander Hamilton who sought to promote a new approach in the economy wherein he advocates the urban mercantile interests.

Don't use plagiarized sources. Get your custom essay on
“ Jefferson vs. Hamilton: Confrontations That Shaped a Nation ”
Get custom paper
NEW! smart matching with writer

He advocated the role of a strong central government in the promotion of new economic policies that can improve commerce and industries (Cunningham, 2000). At the same time, he advocated that credit must be supplemented and be supported by adequate planning. Cunningham mentioned that this can be achieved by creating a Central Bank that is administrative of both fiscal and national industries (p.

On the other hand, Thomas Jefferson who was an anti-federalist sought to advocate the rights of the state rights. Though both actors may adhere to the application of a central government in foreign affairs, Jefferson did not see it also applicable in other domestic and state affairs (Cunningham, 2000). Seeing this, the main argument between the two involves the creation of the Central Bank. Cunningham argued that for Jefferson, he viewed such scenario as a move to centralize the power of decision making from states to the central government (p.

In the end, the book offers a good presentation of the contending arguments and view of both actors which in the end paved the way for the creation and development of America during that period. It is through their efforts and contrasting views that their legacies shall forever be imparted in history as individuals who shaped and made changes possible for all.

Cunningham, Noble, E. Jefferson vs. Hamilton: Confrontations That Shaped a Nation. 2000 (US:

Jefferson vs. Hamilton: Confrontations That Shaped a Nation. (2016, Sep 23). Retrieved from https://studymoose.com/jefferson-vs-hamilton-confrontations-that-shaped-a-nation-essay 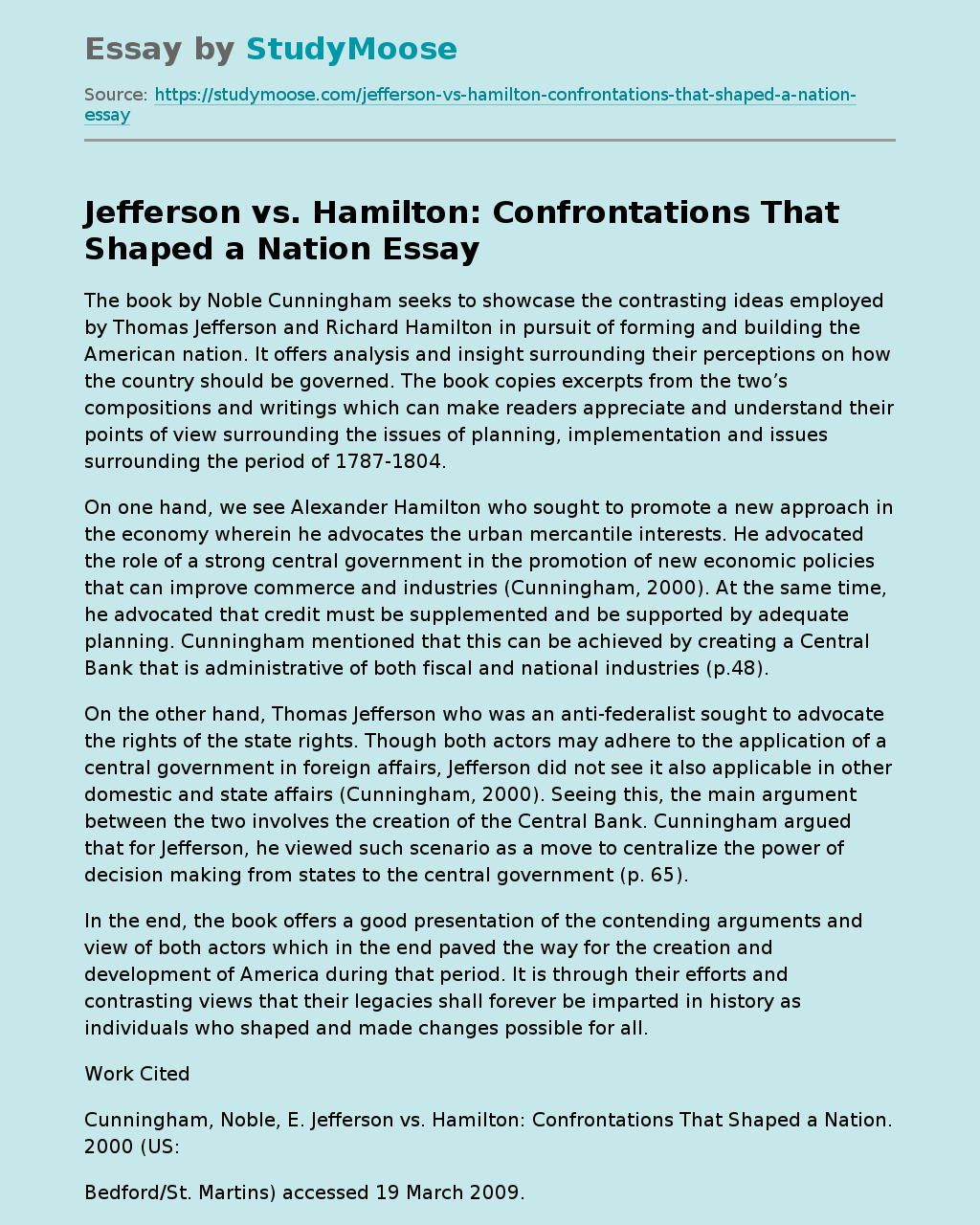