Jane Loevinger and Her Theory of Ego Development

Human development is a fascinating subject. Psychologists have long studied the recurrent patterns of how humans develop physically, emotionally, and psychologically. If psychologists can find patters, then they can begin to predict behavior and understand how and why people behave the way they do. Many theories have been put forth to try to explain some of the consistencies people go through as they develop. Jane Loevinger is one of those developmental theorists. Her theory of ego development has been a significant contribution to the psychological world.

Don't use plagiarized sources. Get your custom essay on
“ Jane Loevinger and Her Theory of Ego Development ”
Get custom paper
NEW! smart matching with writer

Loevinger was born in 1918. She grew up in Minnesota as the daughter of a lawyer and homemaker. Her home was comfortable, but not full of a lot of love. After finishing her undergraduate and master’s degree at the University of Minnesota, she ended up at the University of California. There she was a research assistant for Erik Erikson. She learned a great deal during this time about her own thoughts and beliefs about psychology (www.

webster. edu). In 1943 she finished her PhD dissertation on the construction and evaluation of tests of ability.

Her critique of test reliability made her no friends in the psychometric world, and publications refused to publish her work. She ended up paying for the publication herself. After finishing her dissertation, Loevinger quit working full time to have her two children. During this time she felt the guilt and pressure all moms feel. Working moms feel guilty for all the time they spend away from their children, and stay-at-home moms feel guilty for not doing anything professionally.

She also felt discriminated against because of her gender.

After working in unfulfilling part-time jobs, Loevinger finally decided to get back to research. She was one of the first psychologists to focus her testing on the demographic of women. She began working with a small group of women, and eventually designed the Sentence Completion Test (SCT) which consists of thirty-four open-ended questions that measures ego development. This test led her to develop her theory of ego development, which states that a person’s ego development follows nine typical phases (psychology-health. today. com).

Loevinger’s theory of personality asserts that as people grow, they begin to internalize social rules, become less impulsive, and mature in their decision-making processes. The first stage of development is the infancy stage. This is the very beginning of development and ego. The infant does not know how to do anything but cry when it needs something. No thoughts are about anything other than the self. The impulsive stage is similar; when a young child wants something, they want it now. They are starting to understand consequences at this stage, so there is some awareness of others.

The self-protected stage is when children first exhibits self control. They understand rewards and consequences, and are very motivated by them. The next stage, the conformist stage, is when conforming to the group of peers in paramount. There is no identity outside the group, and the disapproval of others is a major problem. Behaviors are judged by what happened, not by the intentions behind them. Finally, in the self-aware stage, there begins to be a bit of maturity. This is when people begin to become individuals. There is more to life than the group, and an inner sense of self is emerging.

The conscientious stage takes those ideas even further. Here the person has goals and ideals, a sense of responsibility, and feels guilt not only about breaking a rule, but because of the thought of hurting others. Motives are taken into account as well as actions. During the individualistic stage, there develops a greater tolerance of other people, as well as an awareness of inner conflict. During this stage, the person will pull away from the group toward a more individual identity. People in the autonomous stage show a great deal of maturity.

They worry about their needs verses the duties of their lives, they want self-fulfillment, and they can understand more than one point of view. Finally, the integrated stage is reached when a person fully understands their own identity. She is self-actualizing, and can understand behavior motives and intentions of others as well as herself. While not all people will be able to reach this last stage of integration, Loevinger shows a road map of how to get there. I feel her developmental theory is meaningful today, because people still have inner struggles throughout the course of their lives.

When I think about all of my friends and family, I can see which stage they are each in. Loevinger contributed a theory that definitely stands the test of time and is relevant to people today. I can also look back over my life and see that some decisions I made were direct results of the stage I was in at the time. I feel like I am always trying to improve myself on the inside, and be a good person on the outside, so I feel I am in the conscientious stage. I know some of my friends who are still in the conformist stage, and this is probably a source for much of our conflict.

I cannot understand why they are so concerned with what others think about them, but it might be simply because they have no matured past that stage yet. I think most young adults fall somewhere between the conformist and self-aware stages. That is why so many young adults get into trouble; they follow the group and try drugs or things they would not ordinarily try on their own. The group mentality can be very problematic, and the power it has over young adults is scary. Loevinger contributed a theory of ego development that has made a significant impact on how we understand why we act the way we do.

Her stages of development represent specific time frames of life and the decisions that many people make during those times. Her theory is relevant today and still has valid implications for anyone studying human development. References Women’s intellectual contributions to the study of mind and society. Retrieved May 17, 2009, from http://www. webster. edu/~woolflm/loevinger. html Writer 44. Jane Loevinger’s theory of ego development. Retrieved May 17, 2009 from http://psychology-health. today. com/2009/03/01/jane-loevingers-theory-of-ego-development/

Jane Loevinger and Her Theory of Ego Development. (2016, Sep 23). Retrieved from https://studymoose.com/jane-loevinger-and-her-theory-of-ego-development-essay 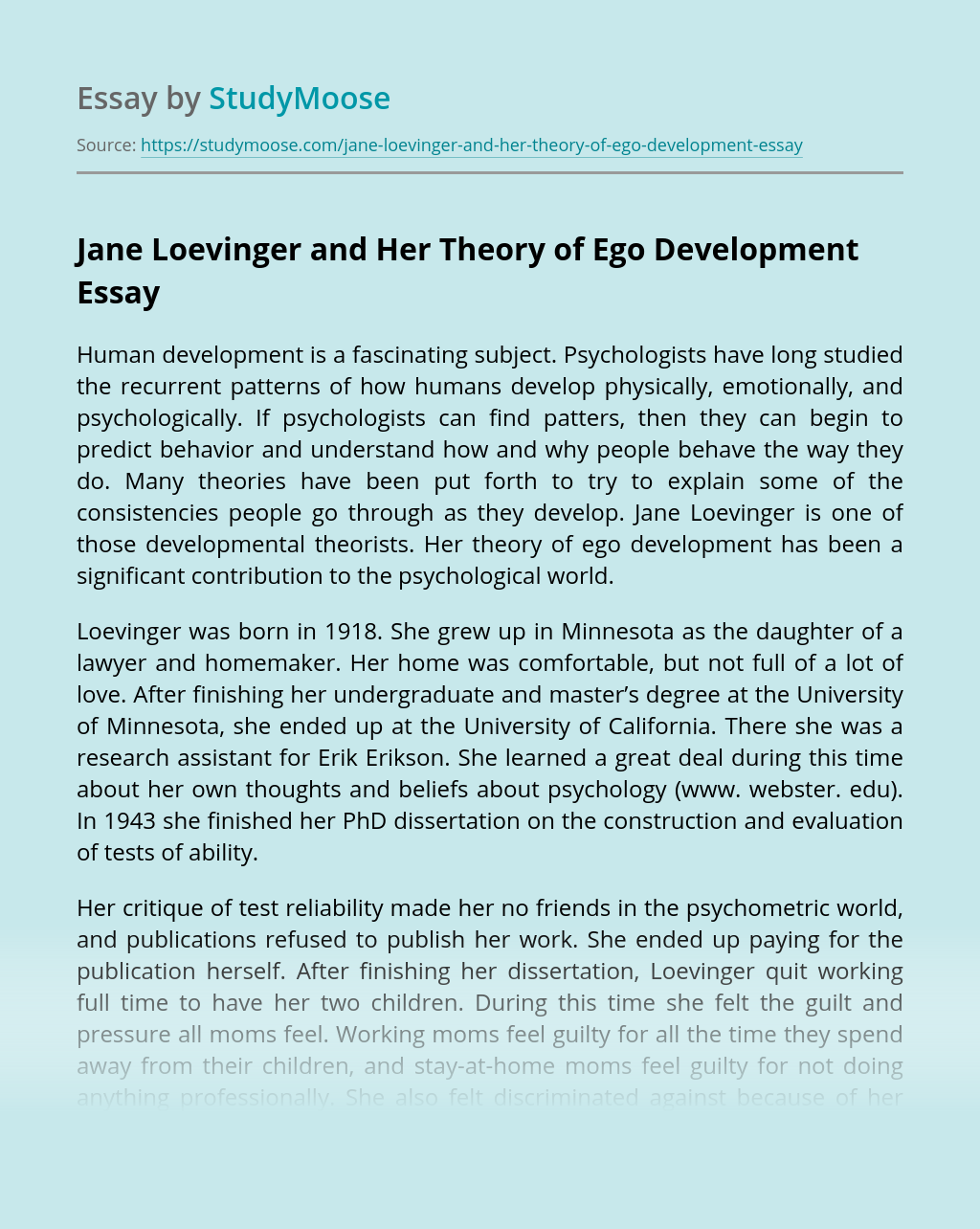