In the early seventeenth century two separate groups founded two very different colonies. The first to be colonized was the settlement of Jamestown, located on the Chesapeake Bay which is in present day Virginia. Just over a decade later the colony of Plymouth was founded on what is now known as Cape Cod, Massachusetts. Though both the Massachusetts Bay colony and the Jamestown colony were established in a similar historical timeframe, they developed distinctly different social views regarding the future, economic status, and political successes.

Don't use plagiarized sources. Get your custom essay on
“ Jamestown Colony vs. Chesapeake Bay Colony ”
Get custom paper
NEW! smart matching with writer

Upon arrival in America, one hundred and four individuals were still living aboard the ship that had carried the future Jamestown settlers all the way from England. Those who were still living had endured a long and hard journey. Many suffered from malnutrition. Quickly the exhausted settlers chose a peninsula on the northern bank of the James River as the sight for their settlement. This sight was chosen mainly for the purpose of defense. They did not however, give much consideration to the sight’s opportunity for providing a healthy living environment.

This decision would prove fatal for many of the settlers in the weeks and months to come. This decision however, may have seemed the only logical one for them at the time.. The Jamestown colonists joined this expedition with one thing on their minds, to obtain wealth..

Their desire for wealth was so great that they overlooked many of the basic necesities such as clean water. Instead they focused on less important things such as setting up protection from savages.

This consisted of setting up a circle of wooden posts, driven into the ground and sharpened to points at the tops. Settlers of the Massachusetts colony at Plymouth also endured a long journey across the ocean. This group of seventeenth century separatists first stepped there feet on American soil, December 21, 1620. Wisely the colonists of Plymouth settled in a desserted Indian village. Here they had access to fresh water and other necessities of life.

Unlike the Jamestown colonists, the colonists of Plymouth did not over look the importance of their sight, and spent little time on military pursuits and fortifications. This may in part be due to the attitude carried with the separatists. They, unlike the Jamestown settlers were not settling with hopes of wealth but instead to start a new life with their own religion. There fore they were prepared to start new lives and had no sophomoric conceptions of “savages” and forts. The ships manifest of passengers bound for New England shows how ready the colonists were to start new lives, and how different.

They brought along their entire families, including women and children. In the ship’s manifest it is shown that twenty of the forty-two passengers were female and nineteen passengers were under the age of sixteen. Only eleven of the Jamestown settlers were women and only three settlers were under the age of sixteen. This information conveys a sense that the Jamestown settlers were not planning for much of a future for the colony beyond themselves, where as the Plymouth settlers had the future of their colony well in mind. Due to the poor placement of the Jamestown colony many of its residence came down with disease and dysentery.

The death rate increased as more and more died from the filthy water which they were forced to drink. With fewer people to work, the economy of the colony fell. Little if any gold was found in the Jamestown colony, they relied on lumber, tar and iron as exports, but again with less and less able bodied workers their economy continued to fall. In document B one Jamestown settler says, “There is nothing to be gotten here but sickness” he also tells of a friend stealing his jacket to pay for food. These were times of almost complete economic poverty. The Plymouth colony also struggled with disease, but being a tightly knit religious group they were much more suited for survival.

The able bodied helped the sick and together they worked through the tough times. Another characteristic of the Plymouth group, that worked in their favor, was the fact that they had a much greater ability to reproduce. Where in Jamestown the death rate was high and the birth rate was low, in Plymouth the death rate was high but so was the birth rate. This allowed them to maintain their population through the most devastating of times. With this success also came the success of their farming operations. Plymouth developed a slightly primitive agrarian economy. The colony began to raise its own food. This economy flourished, and due to this great strides the economy as a whole flourished. This raised the standard of living for the settlers immensely. Continuing their downward spiral of negative choices. The unrest in the Jamestown colony caused by the economic downfall lead to political unrest. Jamestown went through several leaders one of which is the legendary John Smith, but John Smith’s greatness was only a legend. He was in fact a poor leader and his citizens attempted to have him hanged on one occasion.

In fact there was not one successful leader in Jamestown, and there was almost no political stability due to the constant change in leadership. In Plymouth a very different situation had occurred. Their positive choices had led to a very stable economy and an almost constant faith in their political system.

The most famous leader of this colony was William Bradford. Bradford was the epitome of a humble serving leader. He was popular amongst the people and was elected to numerous terms in his political office. Like their economy the political system of the Massachusetts Bay colony became a “city upon a hill” that could be used as a model society for the entire world. In conclusion the information presented leads to the assumption that Plymouth was much better suited for survival in that they had much more intelligent social views regarding the future, they developed a much more sound economy and their leadership sparked a unified political system. Where as Jamestown had little plan for the future and due to poor choices their economy struggled as did their political system. 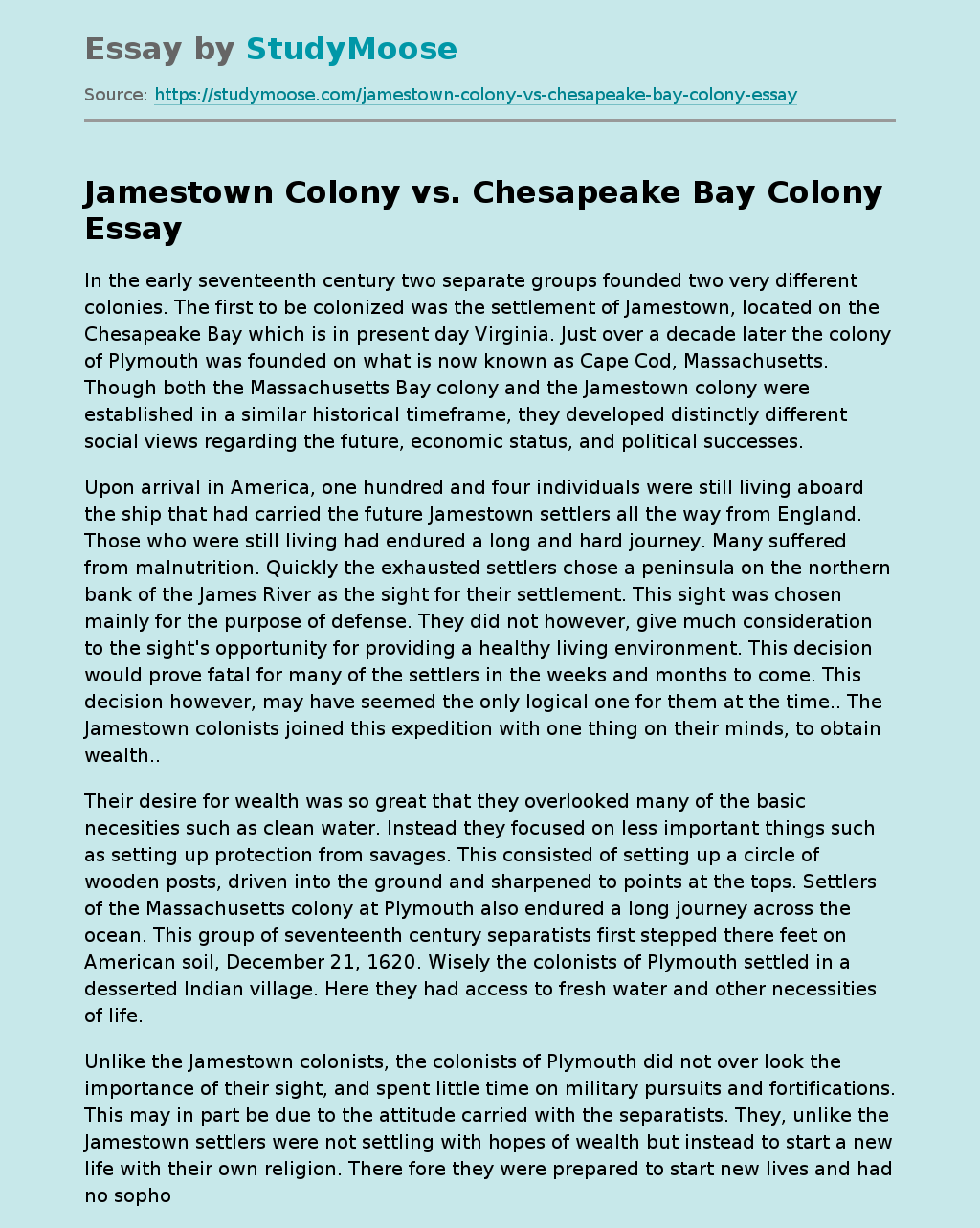