Is Music is purely for relaxation

“Music is purely for relaxation.” Do you agree?

In every corner of the world, people play and listen to music. ” Music is everywhere is man has ears.” Music so often defies definition. Music is often considered as one of the two most precious gifts from God. For the sake of clarity music is often defined as the organisation of sounds and silences into interesting and meaningful patterns. Music is ubiquitous and has existed since time immemorial. Man simply cannot imagine life without this divine gift.

But to say that music is purely for relaxation is very lopsided. This is so because music has a multitude of functions.

Music is a sine qua non in a man’s life and has an amazing power. It works miracles on the human psyche. Music has the ability to alter the brain chemistry. That’s why music is important for our psychic equilibrium. We have various types of music to appeal to various people who have various temperaments.

Music has a soothing effect on man. After a hard day of work, music brings a welcome relief. Music has the ability to relax both our mind and muscles. Also, music is used in therapy as it has a therapeutic value. Music relaxes patients and it’s a way for them to get over their pent up feelings. Altogether, music plays a central role in the way we relax. Lots of people go to nightclubs and discotheques to have a break from humdrum life as music and dancing make us feel refreshed.

Though lots of people consider music as a medium of relaxation, it is often used for human solidarity. Music is not an end in itself. It is a means to an end. Music is the best way to demonstrate human solidarity. Musicians use music to raise funds for laudable purposes and also to sensitise the world on the sufferings of other fellow earthlings. Some examples if great music for such causes are: ‘heal the world’ for children’s right; ‘imagine’ by John Lennon for world peace and lately, ‘ live for love united’ written by Desmond Child and Pascal Obispo and sang by well known footballers to raise funds for the combat of aids.

Likewise, music plays an important role in mass consciousness. Music is used as a vehicle to vent out human misery. The jazz composed by the black people; the reggae of Bob Marley is a way for the black to express themselves in the teeth of white domination. There is the Sega by the slaves and now the ‘ Sega engage’ a way to denounce and fight social and political injustices.

Furthermore, music is used to reinforce religious faith. In the England church’s music and songs are used to remobilize believers. In Mauritius, Father Grégoire shows the way of God through music. Even the pope once symbolically displayed a guitar just to show that music has a spiritual dimension. All religion in the world has a distinct type of music. An example is the Gregorian. Gregorian chant is the a cappella liturgical chant of Occidental Christian churches. Moreover music is associated with patriotism. Each country in the world has its own national anthem.

Music has its place in the sports world and fathers international goodwill. In some sports disciplines like ballet dancing, ice-skating and synchronised swimming music is of great importance as music together with such sports disciplines express human grace in its best form. The Olympic committee even has its own music and so does the champion’s league. Football team like Liverpool has its own music which is ” you’ll never walk alone.”

The film industry has gone a long way since the silent movie. Nowadays, music and film making go hand in hand. India is the biggest producer of films and music occupies a fundamental role. As a great Indian producer once said that action, love and the most important of all music forms part of all Indian films. Also he added without music Indian film would have been simply boring and this industry would not have lasted long. In Bollywood, A.R.Rahman is one of the best music composers. Also the film ‘Taal’ which means ‘beat’ is based on music and this film is simply extraordinary. In Hollywood, the music directors are extremely professional because music becomes part of the movie. Films like Saturday night fever; Grease and Dirty dancing are magnum opus. Films and songs together help each other to become hits and the most lately appropriate example is Titanic with the song ‘My heart will go on’ by Celine Dion.

Nevertheless, music is also used for evil purposes. Martial music is written especially to mobilise troops before going in a battle and to incite soldiers. This type of music helps and makes them mentally strong to face their enemy. Also music is a vehicle for propaganda. In U.S.S.R music was used to brainwash people in order to make them believe in communism as religion. With the help of music, musicians can express their hatred. Eminem usually express hatred in his songs for gays and lesbians.

Music is a gift of God and has become part and parcel of the human life. We simply cannot imagine life without it. It is everywhere and without it, we all would surely die of boredom. Its incredible effect is beautifully summarised by Congreve when he said: “Music hath the charm to soothe the savage beauty, to smoothen the rock and to bend the knotted oak” and Shakespeare: ” If music is the food of love, play on.”

Is Music is purely for relaxation. (2016, Jun 22). Retrieved from http://studymoose.com/is-music-is-purely-for-relaxation-essay 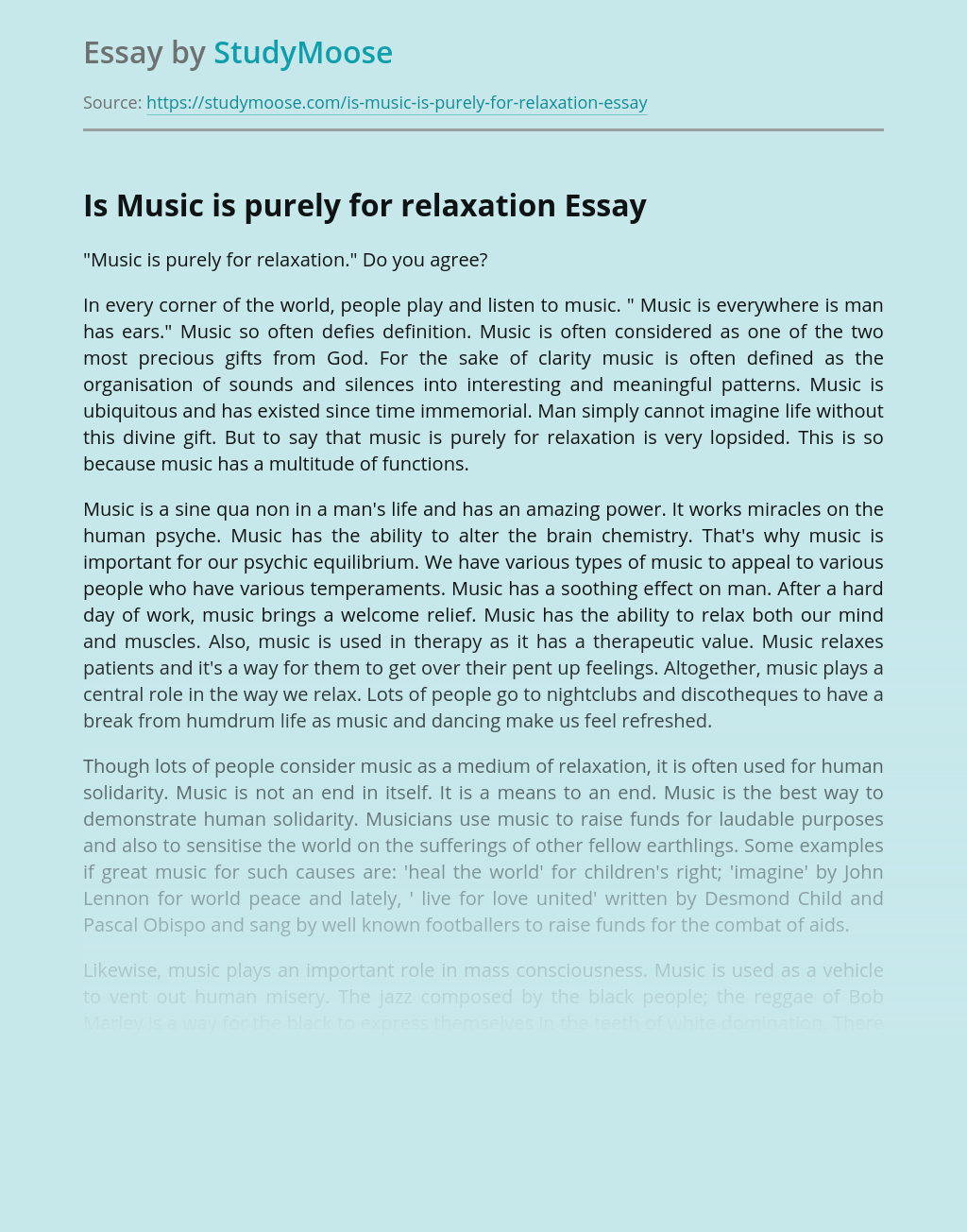 Don’t waste time
Get a verified expert to help you with Is Music is purely for relaxation
Hire verified expert
$35.80 for a 2-page paper
Stay Safe, Stay Original