Lady Macbeth has more ambition than Macbeth. When Lady Macbeth has received the letter from her husband, Macbeth, telling her about the three witches’ prophecies and the future king Macbeth, she decides to make it come true immediately. Macbeth who is loyal man and unwilled at first, but unfortunately gets convinced by Lady Macbeth. Lady Macbeth is cold-blooded person as she thinks to regicide Duncan right after reading Macbeth’s letter.

In the other hand, Macbeth is a brave soldier, a powerful man and also shows great loyalty.

Turn in your highest-quality paper
Get a qualified writer to help you with
“ Is Lady Macbeth More Ambitious Than Macbeth ”
Get high-quality paper
NEW! AI matching with writer

“I dare do all that may become a man; who dares do more is none,” meaning that it is the power to put responsibility before selfishness. It tells us that Macbeth is too generous to kill King Duncan without good enough reason. He is born loyal. However Lady Macbeth convinced Macbeth to commit a dark act. He became indecisive and confused which eventually lead him to murder Duncan.

Lady Macbeth would do anything to fulfil her ambition where Macbeth has ambition but he is indecisive and afraid of the consequence that will come after murder of Duncan.

She is stubborn because she encourages Macbeth to regicide. When Macbeth backs out, refusing to kill Duncan, Lady Macbeth accuses Macbeth for being a coward. She also says he is not a man if he doesn’t murder Duncan. Lady Macbeth assures him that they won’t fail if they have courage. Definitely this is not exactly true and never right. This shows Lady Macbeth is desperate to fulfil her needs.

He was brave, smart and showed real loyalty in the beginning of the act and at the end where he regrets all his actions. And later in the act, Macbeth wishes that Lady Macbeth was still alive so he could blame her for all the actions. Lady Macbeth’s ambition is almost opposite to Macbeth’s. She is the type of person who is willing to achieve anything to fulfil her ambition. Lady Macbeth is the one who made all situations possible and it shows us that Lady Macbeth clearly has more ambition than Macbeth. 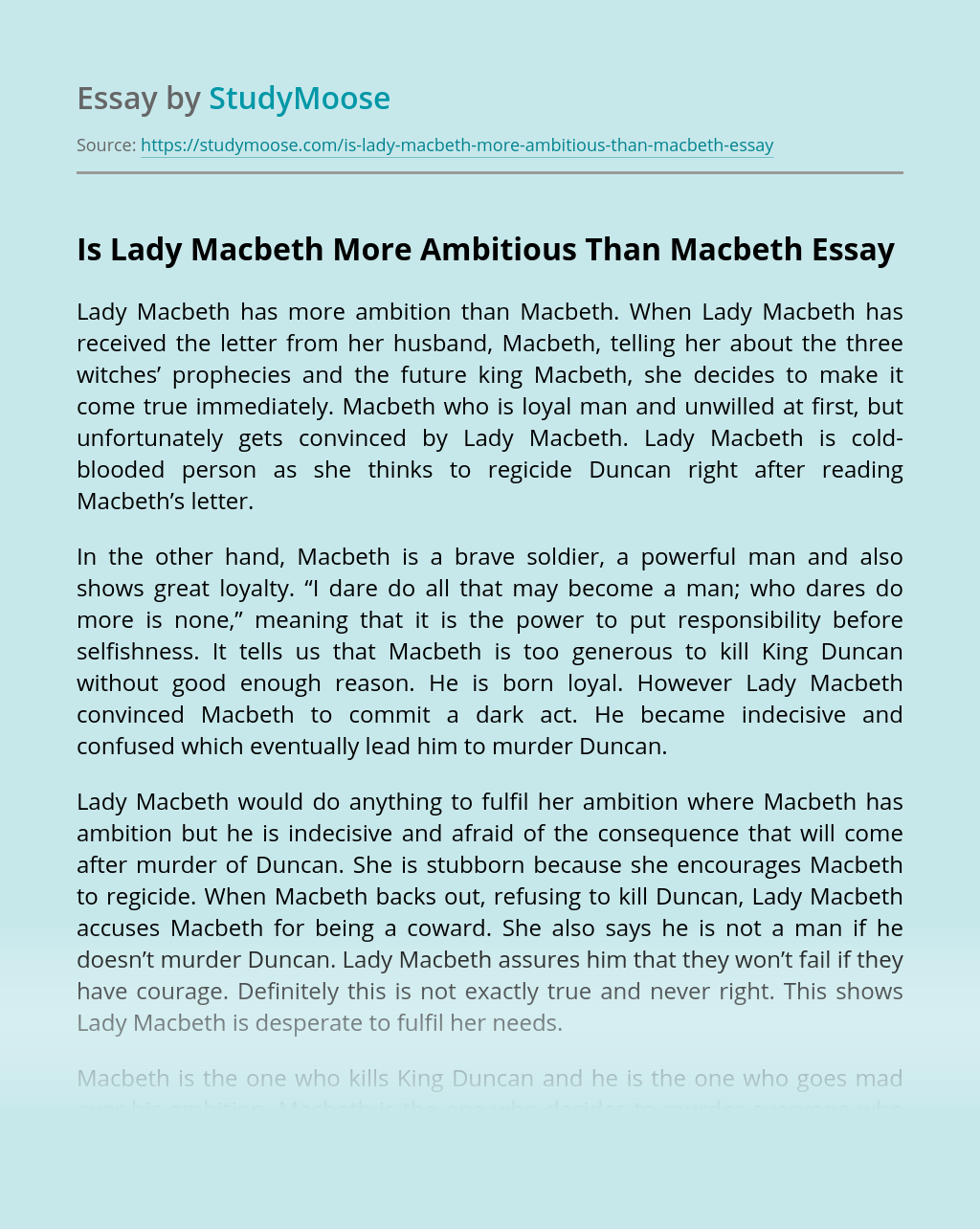 Turn in your highest-quality paper
Get a qualified writer to help you with
“ Is Lady Macbeth More Ambitious Than Macbeth ”
Get high-quality paper
Helping students since 2015
Stay Safe, Stay Original