There are many inputs to why there more developed economies than other economies when being measured. There are many facts to why economies that were at poor in terms of development after world war two have different levels of economic development. One of the reasons that is taking into consideration is the availability of natural resources for development, according to Robert Solow he explains that there are 2 types of resources; economic resource factors and also the non-economic resource factors that lead to economic development.

Don't use plagiarized sources. Get your custom essay on
“ There are many inputs to why there more developed economies than other ”
Get custom paper
NEW! smart matching with writer

The meaning to this theories in development is that the developed countries today embarked on capital accumulation through encouraging investment and saving and that is why they are more developed than others are.Due to this reason post world war two economies have differing developmental levels. The theorist also stated that trade plays a very impactful part in economic development and growth, through trade, economies are able to acquire wealth and therefore they advocated for free and fair trade and also favorable terms of trade, all this has help shaped to where countries stand today.

The mercantile theory: this theories dwells into why major economies in the world have achieved high levels of economic growth while other economies still lag behind in terms of development, the principle of the mercantile theory was that economies had the desire to make their state more stronger, the need to strengthen the state was only through economic growth and development, therefore economies embarked on this desire and they have now achieved high levels of development.The political policy of the mercantile was the need to increase the national political power, which was to be symbolized by political mighty, and this was to be achieved through economic development.The economies attached much weight to gold, how to acquire it and retain it, they also considered trade as a source of gold and therefore the economies engaged in trade and acquired gold and then gave much value to the gold they acquired.The theory also states that colonization played a role in the development of these developed economies, the new territories acquired were source of raw materials for their industries, source of cheap labor and slavery, and finally these territories were later to b e captive markets. Therefore, the countries that engaged in colonization and also trade are developed today than others, the mercantile theory states that gold, colonization and trade has led to the differences in development of these countries.Although it can be said that Economic development, is achieved largely through productivity growth, is very important to both well developed as a nation. However, even though we know that higher productivity leads to improved economic outcomes there has been no consensus among researchers about either the desired path of development or the role of state in economic development. Concerning the path of development, Lall (2001) says that the appropriate strategy for any country depends not only on its objective economic situation but also on its government policies and national views regarding the appropriate role of the state.The role of the state in economic development began to change dramatically with the advent of the Industrial Revolution. In the West, the resulting industrialization and economic development were based on the establishment of individual property rights that encouraged the growth of private capital. Competition and individual enterprise thrive in this environment because individuals pursue their self-interest of survival and wealth accumulation. The instinct to survive under competitive pressures yields innovation and productivity increases, which eventually lead to both increased profits for business and lower prices to consumers.The governments in these newly independent nations assumed a significant role in economic development. They sought to quickly and substantially raise the standard of living through directed and controlled economic development. Apart from everything else, these developing countries invested heavily in education to promote literacy and to ensure an adequate supply of technical manpower to meet their growing needs. The progress of Indian economic development from 1947 to the present provides further evidence that individuals do respond to incentives in their pursuit of self-survival and accumulation of wealth.Further, the nature of this response depends on the economic climate, particularly the role of the government. The Indian economy provides a revealing contrast between how individuals react under a government-controlled environment and how they respond to a market-based environment. The evidence presented here suggests that recent market reforms encouraging individual enterprise have led to higher economic growth in that country. The reasoning here is not new, although it is refreshing to discover that this tried-and-true reasoning applies to developing as well as to developed nations.Specifically, reliance upon a free market, with its emphasis upon individual self-interest in survival and wealth accumulation, can yield a wide range of economic benefits. In India those benefits have included, among other things, increased economic growth, reduced inflation, a smaller fiscal deficit, and higher inflows of the foreign capital needed for investment. the first questions that come to the mind when economic development is invoked are: What is development? What makes it happen? Most people tend to think of economic development as the features that characterize the developed regions of today , i. e. Western Europe and North America, where the majority of? people are perceived to enjoy a high standard of living with access to housing, education, health care, employment and leisure activities.Let us now come to the information products, namely the indicators. The first indicators focused only on economic and demographic variables such as income, population, per capita income, value generated by different industrial sectors, employment in different industrial sectors etc. and tried to relate structural features to income growth.Human development is a concept within the scope of the study of the human condition, specifically international development, relating to international and economic development. It is more than just the rise or fall of national incomes. Development is about expanding the choices people have, to lead lives that they value and improving the human condition so that people will get the chance to lead full lives. [1] And it is thus about much more than economic growth, which is only a means ”if a very important one ”of enlarging people’s choices.Human development is interconnected with human rights and human freedom because in well-managed prisons life expectancy and literacy as measured by the Human Development Index could be quite high Human development as an approach, deals with what I consider the basic development idea: namely, increasing the richness of human life rather than the wealth of the economy in which human beings live, which is only a part of life itself. development is focused on expanding the choices human beings have to have the life they value. In this sense, it is essential to work on building capacities for human development that is sustainable over time.

There are many inputs to why there more developed economies than other. (2019, Aug 20). Retrieved from https://studymoose.com/there-are-many-inputs-to-why-there-more-developed-economies-than-other-essay 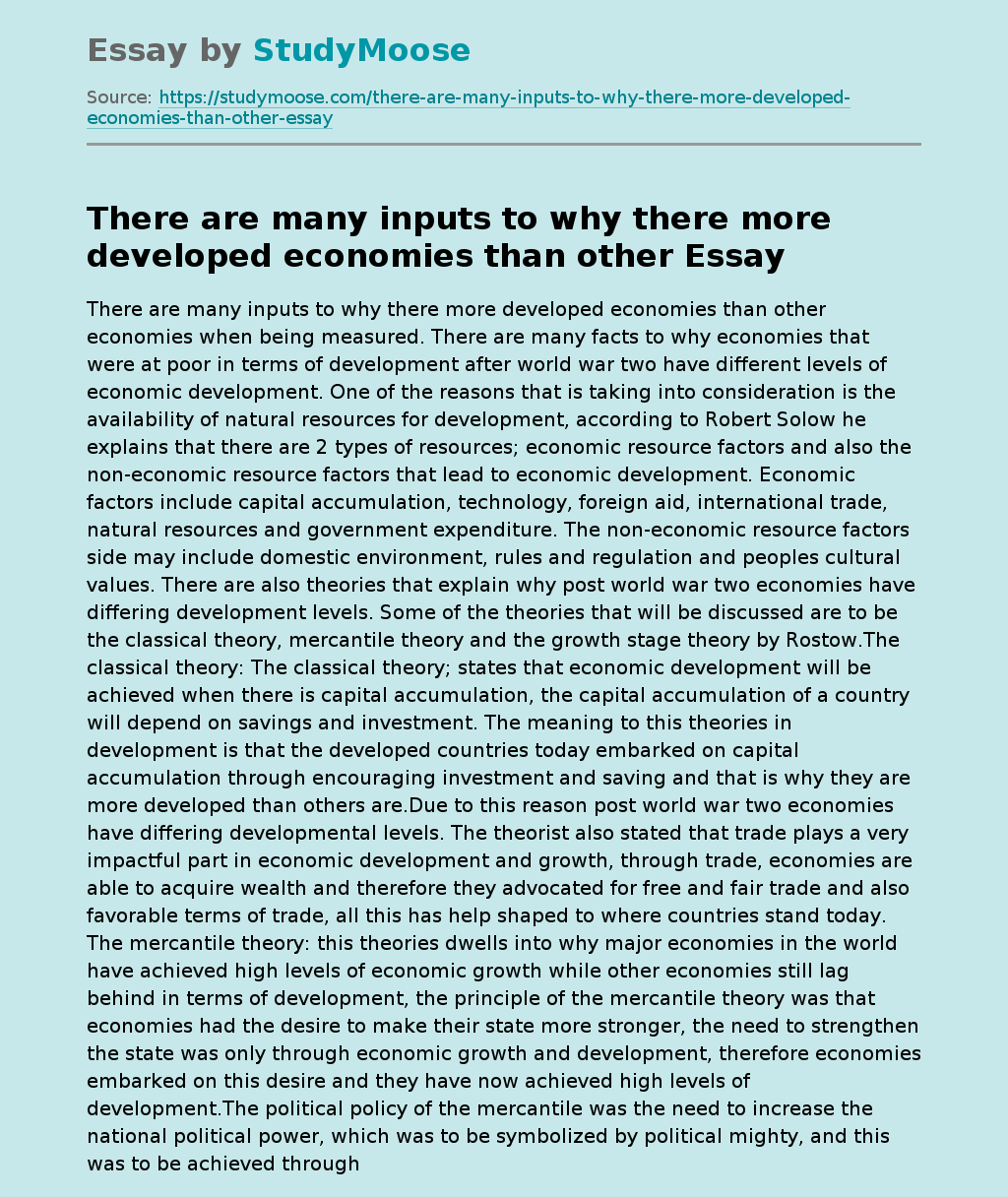