Is Google Making Us Stupid

Have you thought about the effect technology is having on your mental abilities? Me neither until coming across “Is Google Making Us Stupid.” Never before have I been concerned about what the internet is doing to me. I might because I have never seen a time when I couldn’t click a button or type a word and all I need was on screen. No real effort is being put into research or writing or even reading. This essay used its Introduction, Historical referees, and different creditably sources to convince me of the dangers of Technology and the internet.

Turn in your highest-quality paper
Get a qualified writer to help you with
“ Is Google Making Us Stupid ”
Get high-quality paper
NEW! AI matching with writer

Is Google Making Us Stupid by Nicholas Carr, is an article on the effect of technology and the internet on our intellectual being. Carr begins to discuss Technology and what he believes is changing the way people think. He believe that our excessive use of the internet is not letting people be able to think and read how they use to before all the technological influences we have around us.

He talks about the effect on our reading capability, writing capability and other issues others are developing due to our extreme obsession with technology around us.

The introduction to Carr’s article was very well written. The way he drew in the reader’s attention with the movie scene was extremely successful. Although I didn’t understand the reference at first it actually gave me more of an incentive to continue reading the essay. It presented a very interesting twist on a rather boring topic because it gave comedy to the beginning.

It also made me think a bit before actually reading. I was concerned how the first paragraph would relate to the rest of the article, but he did a good job of tying it all into a single theme. The way he introduced his thesis was also well written. I believe that his use computer terms to discuss how computers where making him feel was very witty. “Someone or something has been tinkering with my brain, remapping the neural circuitry, reprogramming the memory.” The first two paragraphs are usually the deal breakers. If the beginning of what I am reading doesn’t interest me, then the article as a whole usually doesn’t get my complete attention. Carr made it easier for me to get into my reading by writing the intro this way. It was easier to stay interested in the rest of the article by the way he drew me in, in the beginning. Over all I feel that the introduction adds to the success of the article.

Another strategy Carr uses is historical reference throughout the article. These were especially refreshing to me because it adds background to the points Carr was trying to convey. It adds a better understanding of the information. It was also a way to make the readers actually believe what Carr was trying to explain to them. Only because he knew that his opinion alone couldn’t convince us. He needed something else to give his ideas credibility, if not who would listen? I also believe that it gave me reason to think about how the progression of events led up what Google is making us think now.

For example, Fredrich Nietzsche, a writer sometime in 1882,Carr explained how Nietzsche bought a typewriter because he was going blind and writing was becoming too much of a task for him. The typewriting was fine until Nietzsche and his friends began to notice a change in his writing. He says “Our writing equipment takes part in the forming of our thoughts.” This interests me because Carr introduced an example far in the past to explain that technology throughout history is seen to have an effect on the way we think. Just think about it if a hundred years ago technology was changing the way people write and think then maybe Carr’s articles has some truths to it after all. It made me question how I use to think and how others use to think in the past relative to now.

Throughout his article Carr gave examples and different peoples opinions on the same topic, which made the article even more creditable and successful. This was very a good way to get his points across to the non-believes. Not only did he feel this way but other credible sources did too. This gave the readers even more incentive to consider what he was saying. The example he provided about Brue Friedman, a regular blogger, on how he notices how his ability to read lengthy books or even website articles has decreased significantly. Different quotes and examples were used appropriately throughout the article effectively. Like the quote by Maryanne Wolf, a developmental psychologist from the Tufts University, “We are not only what we read, we are how we read,” This made me think and question myself and the way I read and think. It made me think maybe the internet is affecting the way I read things in class. At one point in time I had trouble typing and not putting cell phone lingo in my text. That was a great way to make his article stick with me even after I was done reading.

Carr purpose of writing this piece was to inform readers that technology has an effect on us whether you want to believe or not. It’s changing the way we think, write, read, and even study. Our capability to think on our own is slowly falling apart due to our obsessive need for technology. Although we find our savvy computers a major help to us, they aren’t really much help to us. We find ourselves relying on shortcuts and hyperlinks too often. Never thinking about the dangers of technology on us because we can’t look past the usefulness. We are coming to an age where we rely on technology for everything we do. Carr shows us that it might be more help to us to step away from the easiness of computers. To look tough a book rather than search a engine. Carr successfully warned me of the dangers we all might be putting on ourselves. He made me think, Is Google making me stupid?

Is Google Making Us Stupid. (2016, Mar 01). Retrieved from https://studymoose.com/is-google-making-us-stupid-essay 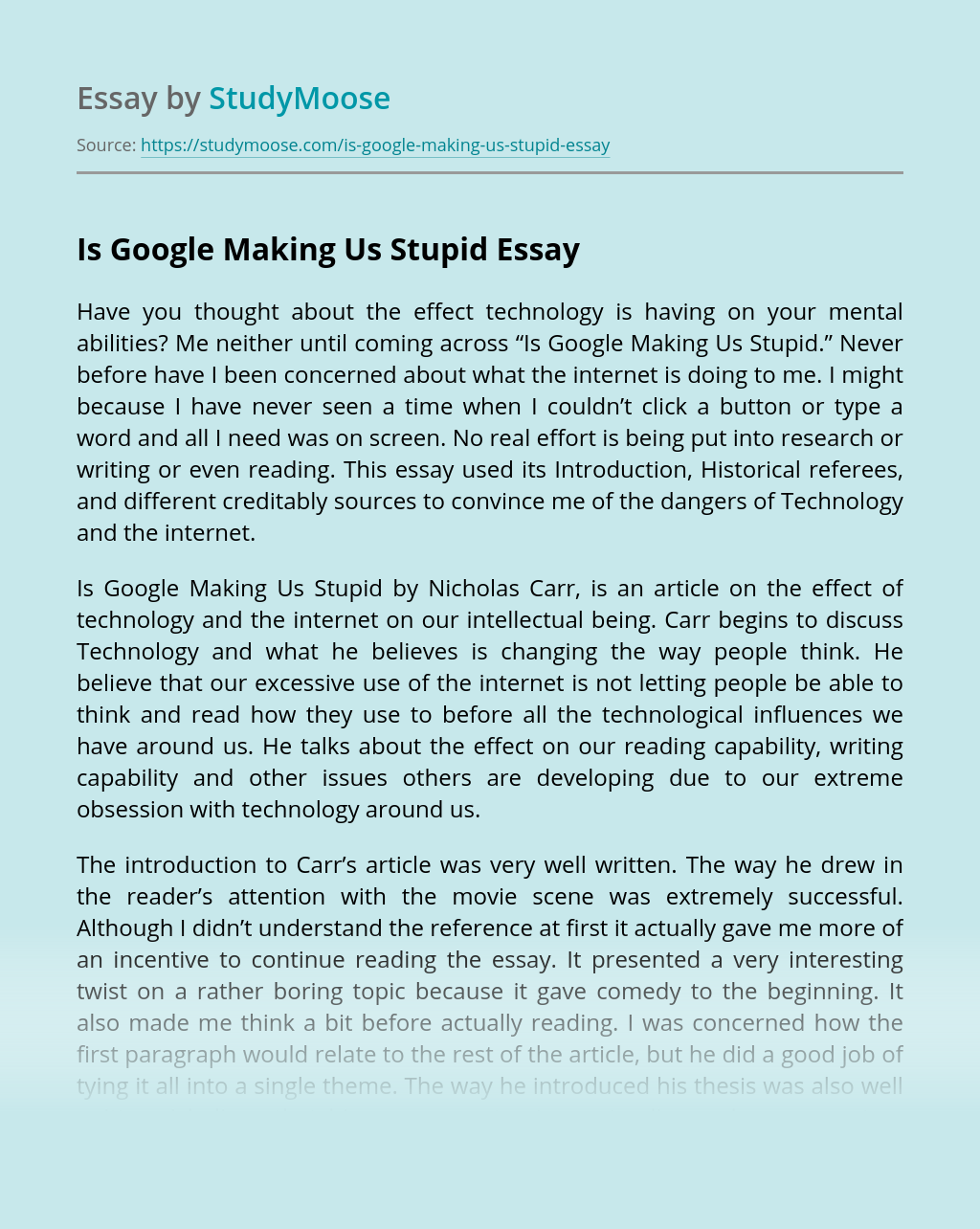 Turn in your highest-quality paper
Get a qualified writer to help you with
“ Is Google Making Us Stupid ”
Get high-quality paper
Helping students since 2015
Stay Safe, Stay Original