Is digit ratio (2D:4D) associated with the choice for the uniformed versus a civil study course by the Polish youth?

Foetal exposure to intrauterine androgens has an important role in the organizational development of brain leaving a lifelong influence on behaviour. The impact of prenatal testosterone exposure during early intrauterine development has critical role in masculinised’ and sexually differentiated behaviours throughout lifespan (Lombardo et al. 2012; Auyeung et al. 2013; Hines et al. 2015; Manning et al. 2017). It is impossible to get an estimate of one’s prenatal hormone exposure later in adulthood. Nevertheless, a simple ratio of the length of the second-to-fourth digit (2D:4D) may serve as a useful proxy that correlates negatively with prenatal testosterone (PT) and a positively with prenatal oestrogen (PE) levels (Manning 2011; Zheng & Cohn 2011).

Don't use plagiarized sources. Get your custom essay on
“ Is digit ratio (2D:4D) associated with the choice for the uniformed versus a civil study course by the Polish youth? ”
Get custom paper
NEW! smart matching with writer

Thus, 2D:4D ratio stood as an indirect estimate of the testosterone-oestrogen balance in a narrow developmental window, approximately between 8-10 weeks of gestation. At this time, the sex steroids exert the organisational’ effect on the brain and other developing systems (Zheng & Cohn 2011; Auger et al. 2013). As male foetuses experience a higher level of PT exposure relative to PE, than the females, males tend to have longer 4th- relative to 2nd digits, resulting in a lower 2D:4D (Manning 2011, Cohen-Bendahan et al. 2005). The sex difference in 2D:4D appears at the end of first trimester (Malas et al.

2006; Galis et al. 2010) and does not significantly change throughout life (McIntyre et al. 2005; Trivers et al. 2006). Therefore, in the general population, males as a group, show lower mean 2D:4D than the females. Some genes that were also suggested to controls skeletal development of fingers also influenced the developing brain (Zheng & Cohn 2011) establishing a plausible link between 2D:4D and brain organisation’ that determines many behavioural traits expressed in adult life (Manning 2011). Most frequently lower 2D:4D were linked with higher sporting ability, higher response to testosterone surge in challenged situation and thereby with increased muscular strength (H¶nekopp & Schuster 2010, Manning et al. 2014; Kociuba et al. 2019). However, several studies also linked 2D:4D with many sexually dimorphic behavioural and personality traits such as assertiveness, confidence or risk-taking and life outcomes such as occupational choice (Manning et al. 2010; Nye and Orel 2015).Significant group differences in 2D:4D were observed among members of different branches of military service and low 2D:4D was linked with the selection of the type of military training associated with higher risk (Huh 2012).Risk taking behaviour was found more often in males (Daruvala 2007; Ball et al. 2010) and linked with prenatal hormone exposure (Apicella et al. 2008) as well as with lower 2D:4D (Garbarino et al. 2011; H¶nekopp 2011). Enterprising nature, interest in male dominated jobs, sensation- and/or thrill-seeking behaviour, choice of academic disciplines were all found to be associated with lower 2D:4D (Weis et al. 2007; Fink et al. 2006; Austin et al. 2012; Koziel et al. 2013). Significant difference in 2D:4D between faculties of science and social science departments was also demonstrated (Brosnan 2006).A lower 2D:4D among women was also associated with male-typical’ jobs in wide varieties of occupations (Manning et al. 2010). Choice of participation in individual-, rather than in group sports among Polish men (Koziel et al. 2016) and opting for a specific type of sport among Polish women, were associated with low 2D:4D (Kociuba et al. 2017). Although it was argued that the decision to venture in a highly competitive environment was not significantly correlated with 2D:4D (Apicella et al. 2011), there was also strong evidence that self-reported competitiveness was negatively associated with 2D:4D (B¶nte et al. 2017). Occupation or sports that involved higher relative risk and required greater physical ability and competitiveness were reported to be associated with low 2D:4D. Several recent studies among Polish population by the present group of authors have also indicated such associations. Polish girls who opted for a regular and compulsory participation in high risk sports like Judo, also showed lower 2D:4D in comparison to other girls who chose relatively low risk sports and games (Kociuba et al 2017). The female police officers in Poland, compared to a civil group of females, demonstrated lower 2D:4D values (Koziel et al. 2017). The Polish women who went for military training course showed lower 2D:4D than women choosing a civil course in the same academy (Kociuba et al. 2016).With this background, the present study tested whether low 2D:4D (i.e., higher intrauterine androgen effect) as associated with voluntary selection of a study course leading to a high risk and challenging occupation in a very young Polish boys and girls aged around 18 years. We compared two groups of children participating in two kinds of courses, one course was leading to a career in military services (hereinafter uniformed course’) and a normal course directing towards civil jobs in future (hereinafter civil course’), respectively. Another objective of this study was to further investigate whether such association was present in both sexes or not. It was hypothesized that the children in the military course would have lower 2D:4D compared to the children in the civil course. In other words, it was hypothesised that the children with an exposure to higher PT during intrauterine development (represented by lower 2D:4D) had an organizational impact leading to a personality type that preferred a challenging career relative. In contrast, those having higher PE exposure (represented by relatively higher 2D:4D), went for a normal study course.DiscussionPrenatal testosterone (PT) has definite organisational’ effects on brain during its early development and thus determines behaviour in the later life to a great extent (Zheng & Cohn 2011).Behaviours more prevalent in males, such as, assertiveness and risk-taking attitude, were very often reported to be associated with higher PT (Manning 2002; Manning & Taylor 2001). Even females exposed to higher intrauterine androgen, demonstrated behaviours that were found more in males, during their infancy, relative to those having a lower exposure (Hines 2000). Even in case of occupational choices, women exposed to higher PT (low 2D:4D) were more likely to work in male dominated occupations, while women with low PT exposure (higher 2D:4D) are more likely to work in occupations that are female dominated (Manning et al. 2010). Indeed, females comprised

Is digit ratio (2D:4D) associated with the choice for the uniformed versus a civil study course by the Polish youth?. (2019, Aug 20). Retrieved from https://studymoose.com/is-digit-ratio-2d4d-associated-with-the-choice-for-the-uniformed-versus-a-civil-study-course-by-the-polish-youth-essay 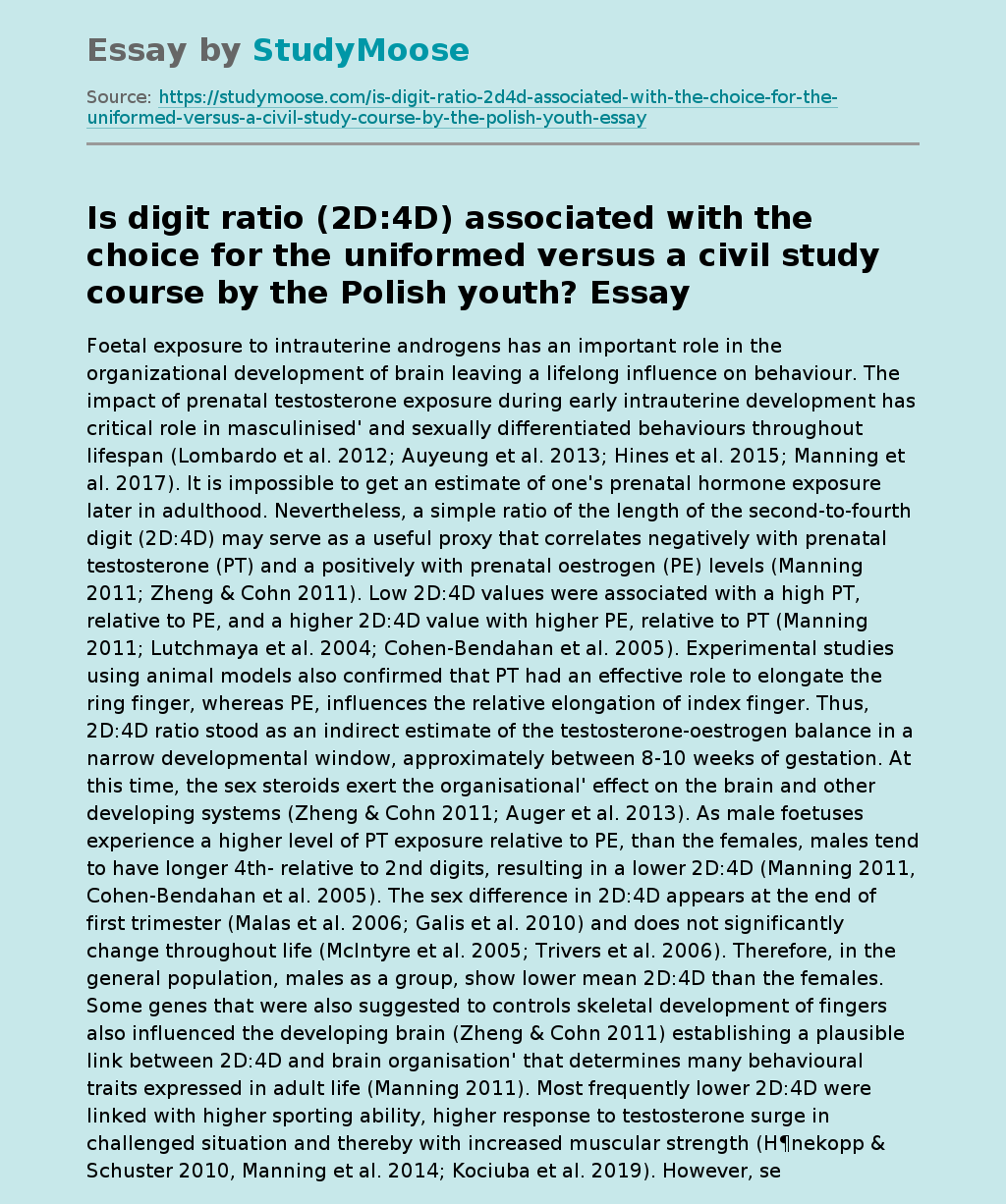