Is Atticus Fitch a good Father

Fathers are important role models who raise and nurture their children with much love. A good father is a man who protects and provides for his children, who disciplines his children, and who tries to bring them up to know the difference between good and bad. Fathers should be there for their children in all times of need, to help and comfort them.1 According to Nicky Marone, the author of How To Father A Successful Daughter, there are four types of fathers.

Don't use plagiarized sources. Get your custom essay on
“ Is Atticus Fitch a good Father ”
Get custom paper
NEW! smart matching with writer

They are: The authoritarian, The softie, The protector, and The pal. The authoritarian father is usually a disciplinarian and very controlling. This person is uncompromising and whatever he says goes. The father who is a softie is greatly loved by his daughter, but is extremely easy to manipulate.

In To Kill a Mockingbird by Harper Lee, Atticus Finch is portrayed as an excellent father because he acts as an educator, treats people equally and allows hischildren to develop their own personalities by giving them more freedom. Atticus is considered to be a pal parent, who shows his children lots of love.

Besides being a lawyer, Atticus also acts as and educator to Jem and Scout. One of the ways he educates them, is by passing on the lessons that he has learned in his life. But Atticus does not just pass on these lessons; he puts them into terms that Jem and Scout can understand. An example of this is when Atticus teaches Scout a very important moral lesson and puts it in language that is easy for Scout to get. You never really understand a person until you consider things from their point of view, until you climb in their shoes and walk around in them.2 This is a crucial piece of advice which influences Scouts development for the rest of the novel.

Scout struggles to put Atticuss advice into practice but at the end of the novel she finally succeeds in seeing things from Boo Radleys perspective, which allows her to fulfill Atticuss advice and ensures that she will not become jaded as she looses her innocence. Another way in which Atticus educates Scout is by teaching her to read at an early age. By teaching her to read early on, Scout becomes a very good reader. In fact, she is so good that, Miss Caroline Fisher, Scouts first grade teacher, tells Scout to stop reading with Atticus because she is too________________________3 Harper Lee, To Kill a Mockingbird. (New York: Warner Books, Inc., 1982), 30.

advanced for her age. Scout becomes annoyed with Miss Caroline and tells Atticus that she doesnt want to go back to school. But Atticus urges her to go back to school and get an education because he loves her enough to see that getting an education would be important to her in the future. As you can see Atticus cares very much about his childrens futures and by educating them he shows the reader that he loves his children a lot. Atticus is a good father because he educates his children, but he is also a good father because he is committed to equality.

Unlike most of the parents in the Maycombian Society, Atticus is committed to equality in all forms. All throughout the book, Atticus treats Jem and Scout as equals. He acts as if he is no better than them and by doing this, he builds a stronger relationship between him and his children, allowing them to relate on better terms. This is apparent when Atticus lets Jem and Scout call him by his first name, instead of father or dad. By doing this he demonstrates that he would like things to be equal and fair. If he let them call him father, it would imply that he is better than them, and that is not what Atticus wants. In fact it is the total opposite of what he wants.

But at the same time, Atticus also realizes that he is supposed to be the father figure and tries to set an example for Jem and Scout. Before Jem looks at anyone else, he looks at me and Ive tried to live so that I can look squarely back at him. 4 Atticus is saying that Jem looks to him for advice and sees him as a role model and Atticus takes that into account every day, with every action that______________________4 Harper Lee, To Kill a Mockingbird. (New York: Warner Books, Inc., 1982), 273.

he makes. This is because he knows that if he makes a bad mistake, Jem and Scout will be watching and they may get bad ideas and make the same mistake as well. So Atticus tries to live his life and treat people as fairly and as equally as possible. Furthermore, Atticus is also committed to racial equality. A few ways in which he demonstrates this is when he lets his children go to Calpurnias church and he also lets Calpurnia (a black woman) raise his children.

By doing this, Atticus is sending the reader a message that he believes in racial equality and that he doesnt judge people just by their skin colour or ¬¬culture. He also defends Tom Robinson (a black male) and his rights while trying to getthe court to give him a fair trial. By doing this Atticus shows that he is not prejudice and treats every person, no matter what color, race, or culture they are, as his own. As you can see, Atticus treats everybody in Maycomb County equally and by doing this, sets a good example for his children. Along with educating his children and treating people equally, Atticus is also a good father because he gives his children freedom.

them freedom, is by letting them pick their own friends. Atticus does not limit them to only playing with white people or with people that have a good family background, he gives them the freedom to establish their own relationships with whoever they want. Inaddition to letting them pick their own friends, Atticus gives Scout the freedom to dress how she wants. He does not tell her to dress more lady like, even with the pressures from Aunt Alexandra and the rest of Maycomb. By giving them freedom, Atticus recognizes that they will make mistakes, but the important thing is to learn from those mistakes and use them to help you to develop into a mature adult. Atticus gives his children the ability to live how they want and make their own decisions. He shows a lot of compassion for his children by giving them freedom, which in turn will make them into mature adults.

¬Atticus is a normal person with a unique parenting style. He does not abide by the basic principle of the Maycombian lifestyle in which other parents use while raising their children. He believes that children should make their own decisions and develop their own personalities. He gives them freedom because he trusts them enough to do so, but as soon as they take advantage of that freedom, he is quick to set them back on track. In conclusion, Atticuss parenting methods and ways of showing affection, have positively affected his childrens personalities.

Is Atticus Fitch a good Father. (2016, Jul 18). Retrieved from https://studymoose.com/is-atticus-fitch-a-good-father-essay 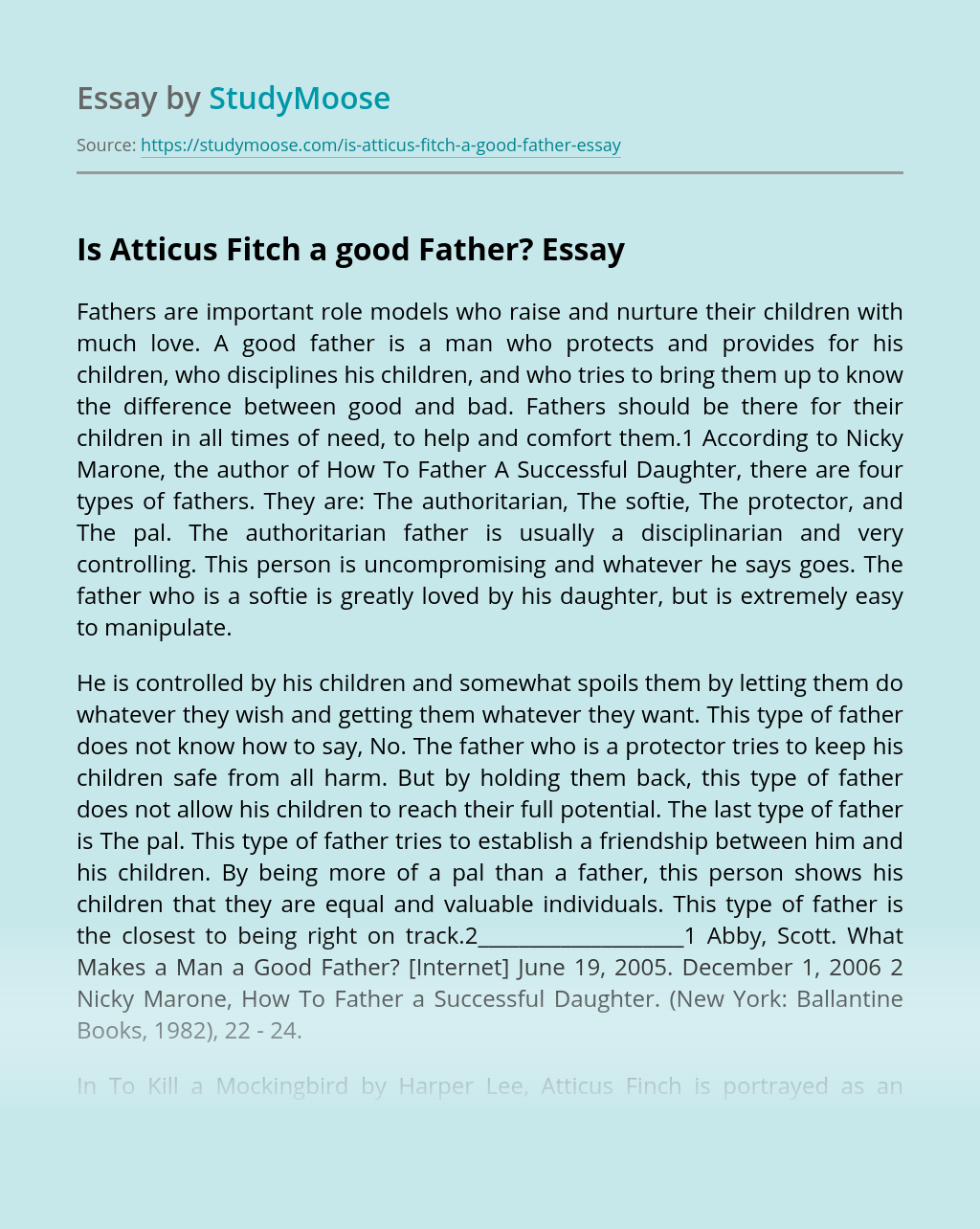