Irony in Death of a Salesman

In the play Death of a Salesman by Arthur Miller Willy Loman was a Sixty- three-year-old man who worked as a traveling salesman in Brooklyn, New York. Loman was an assertive salesman and no matter how hard he worked he could never catch a break. He lived in the same house for years with his two sons Biff Loman, Happy Loman and his wife Linda Loman. Willy’s life was marked by failure and a never-ending attachment to the idea of living the American dream and hitting it big.

Don't use plagiarized sources. Get your custom essay on
“ Irony in Death of a Salesman ”
Get custom paper
NEW! smart matching with writer

In this story Loman’s life ended by his own hands, this occurred because his dream to have a perfect life failed and his pride and spirit were completely dying with it. In the 1940’s the American dream was not just focused on living a perfect life with your wife and kids in a house with a white picket fence. In fact, its main focus was on working hard and men making an honest living providing the necessities for their families to rise above the great depression.

I chose thematic approach The American Dream / Nightmare because trying to live up to the perfect life style of the American dream has us picturing. It can make us do the most horrifying thing without even thinking about it first. Miller’s play “ Death of a Salesman “ is a very perplex play which reveals how the loss of the American dream can drive a person to insanity.

Willy Loman is a man living on the end of the modern America period , in the late 1940’s.

As he slowly begins to lose his mind in the materialistic side of the world , it becomes clear that the only thing he is really concerned about is keeping up with the people that surround him in terms of success and possession. Loman lived a life of betrayal and disappointment from his father abandoning him at a young age and his son Biff’s rejection towards him. He also worked very diligently to express credit that he should find rewards, humiliation and disappointment to just piled on top of each other. He attempted looking into other people (the mistress) to prove that he can fill the hollow and unfulfilling pity he was feeling inside. In the story he is nowhere in his right mind and you can clearly see it because he is still supporting this pleasant vision of success and happiness, but without the tools or the route to navigate to it safely.

In the play the main type of conflict is man vs man and man vs society. For example, the major conflict in the story is between Biff Loman and his father. Willy felt as if Biff was a disappointment to the family because he was not able to live up to the expectations he set for him. His mother then says “Biff Is a man who has not “found himself “yet. Even at the age of thirty- four willy just seems to view him as a child. This is best demonstrated by his lacking capability to keep a job. He and Happy still sleep in their same old bunk beds; despite the fact that this reminds Linda of there better times, it just shows that neither of the sons has matured. The other conflict is man vs society, and this is demonstrated because Loman is so caught in the idealistic world that he had to live up to society expectations and that in order to be happy you had to have all the materialistic items in the world. This is a clear display of a man driven crazy while trying to live up to the American Dream the world installed into us.

The definition of the American dream is a happy way of living that is thought of by many Americans as something that can be achieved by anyone in the U.S. especially by working hard and becoming successful. . Loman believed that being ‘well-liked” would lead him to success as a salesman, although in reality he was an average person who struggled in a profession that he was not good at. He committed himself to an idea of success that he knew he would never achieve as a salesman. He also instilled the same illusion into his son, Biff, that anything would be possible if he was “well-liked. However, in the play Willy seems to live in two different realities. In the first reality he envisions himself as an old unsuccessful salesman who fails to provide for his family and the second reality he sees himself as still being a young, promising salesman and his options are still open not only for him but for his sons Biff and Happy as well. Willy always looked at his brother in jealousy because his brother Ben left home at the age of seventeen and before he turned twenty he already came upon a fortune in Africa. In Willy’s eyes Ben is living the American dream. He wants his sons Biff and Happy to be as successful as his brother. As the play continues it begins to break down everything that has failed in his life from his dream to being successful to his marriage and his children.

However, this play ends an ironic note, because after willy committed suicide and his family hosted his funeral nobody showed up and it confused Linda a lot. Near the end looking at Willy’s grave site she thought to herself that willy had no business going to commit suicide and she could not feel any sympathy or cry for him. Linda then states that she has finally made the final payment on their house and has finally created a sense of financial security for the Loman’s for the first time, something that Willy Loman worked for thirty-five years in order to build this sense of security and stability for his family. Ironically Willy was free from every disappointment he encountered in life yet committed suicide before he could enjoy the results of his work.

Irony in Death of a Salesman. (2021, Oct 04). Retrieved from http://studymoose.com/irony-in-death-of-a-salesman-essay 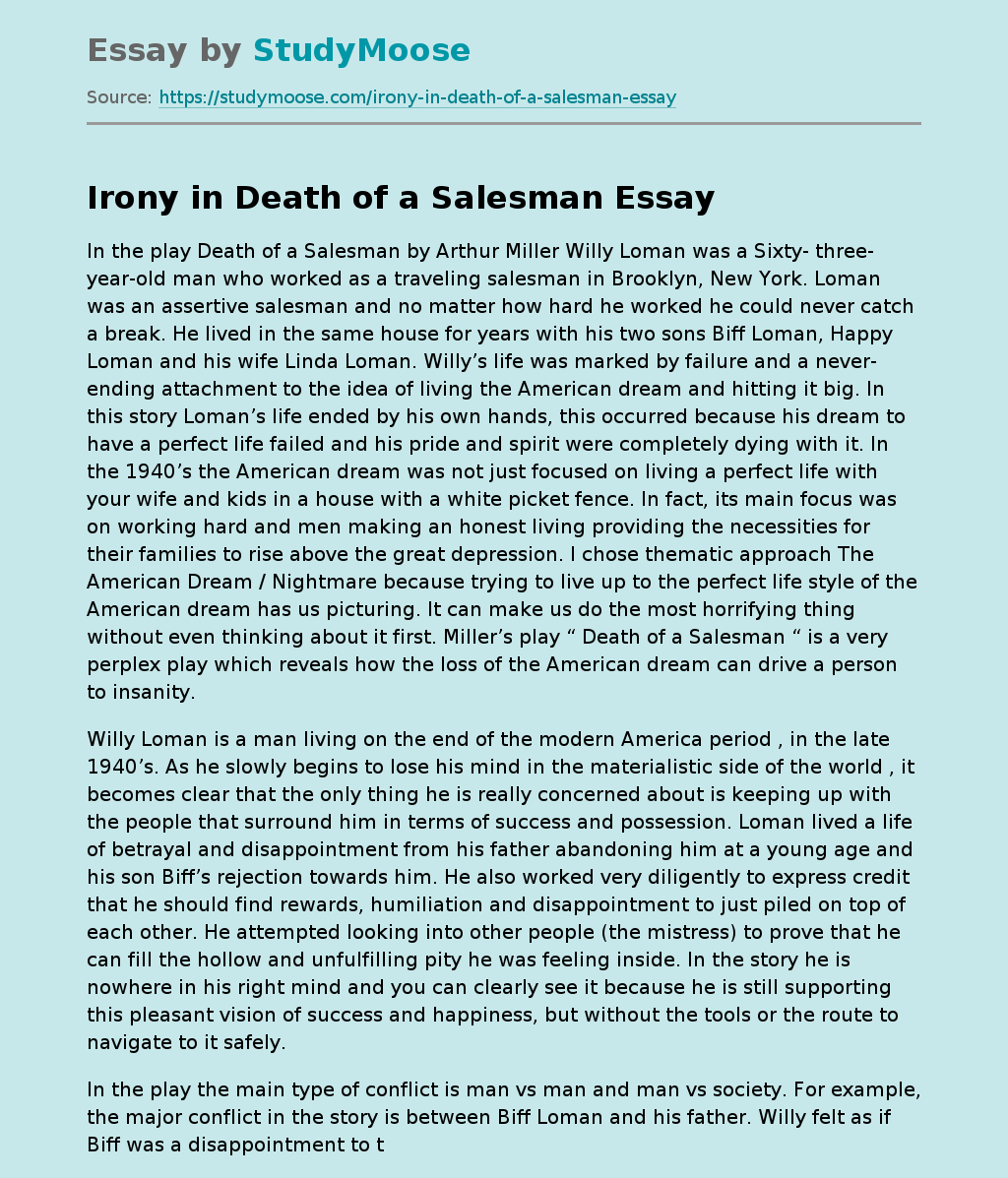