The buying and selling of goods and services across national borders is known as international trade. International trade is the backbone of our modern, commercial world, as producers in various nations try to profit from an expanded market, rather than be limited to selling within their own borders. There are many reasons that trade across national borders occurs, including lower production costs in one region versus another, specialized industries, lack or surplus of natural resources and consumer tastes. One of the most controversial components of international trade today is the lower production costs of “developing” nations.

Don't use plagiarized sources. Get your custom essay on
“ International Trade: Buying And Selling Of Goods ”
Get custom paper
NEW! smart matching with writer

There is currently a great deal of concern over jobs being taken away from the United States, member countries of the European Union and other “developed” nations as countries such as China, Korea, India, Indonesia and others produce goods and services at much lower costs. Both the United States and the European Union have imposed severe restrictions on imports from Asian nations to try to stem this tide.

Clearly, a company that can pay its workers the equivalent of dollars a day, as compared to dollars an hour, has a distinct selling advantage. Nevertheless, American and European consumers are only too happy to lower their costs of living by taking advantage of cheaper, imported goods. Even though many consumers prefer to buy less expensive goods, some international trade is fostered by a specialized industry that has developed due to national talent and/or tradition. Swiss watches, for example, will never be price-competitive with mass produced watches from Asia.

Regardless, there is a strong market among certain consumer groups for the quality, endurance and even “snob appeal” that owning a Rolex, Patek-Philippe or Audemars Piguet offers. German cutlery, English bone China, Scottish wool, fine French silks such as Hermes and other such products always find their way onto the international trade scene because consumers in many parts of the world are willing to foster the importation of these goods to satisfy their concept that certain countries are the best at making certain goods.

One of the biggest components of international trade, both in terms of volume and value of goods is oil. Total net oil imports in 2005 are over 26 million barrels per day (U.S. Energy Information Administration figures) (Note: Imports include crude oil, natural gas liquids, and refined products.) At a recent average of $50 per barrel, that translates to $1billion, three hundred million, PER DAY. The natural resources of a handful of nations, most notably the nations of OPEC, the Organization of Petroleum Exporting Countries, are swept onto the international trade scene in staggering numbers each day, and consumer nations continue to absorb this flow. Other natural resources contribute to the movement of international trade, but none to the extent of the oil trade.

Diamonds from Africa, both for industrial and jewelry use, wheat and other agricultural products from the United States and Australia, coal and steel from Canada and Russia, all flow across borders from these nations that have the natural resources to the nations that lack them. Despite complaints about trade imbalances, effects on domestic economies, currency upheavals, and loss of jobs, the reality of goods and services continually crossing borders will not go away. International trade will continue to be the engine that runs most nations. Information is for educational and informational purposes only and is not be interpreted as financial advice. This does not represent a recommendation to buy, sell, or hold any security. Please consult your financial advisor. 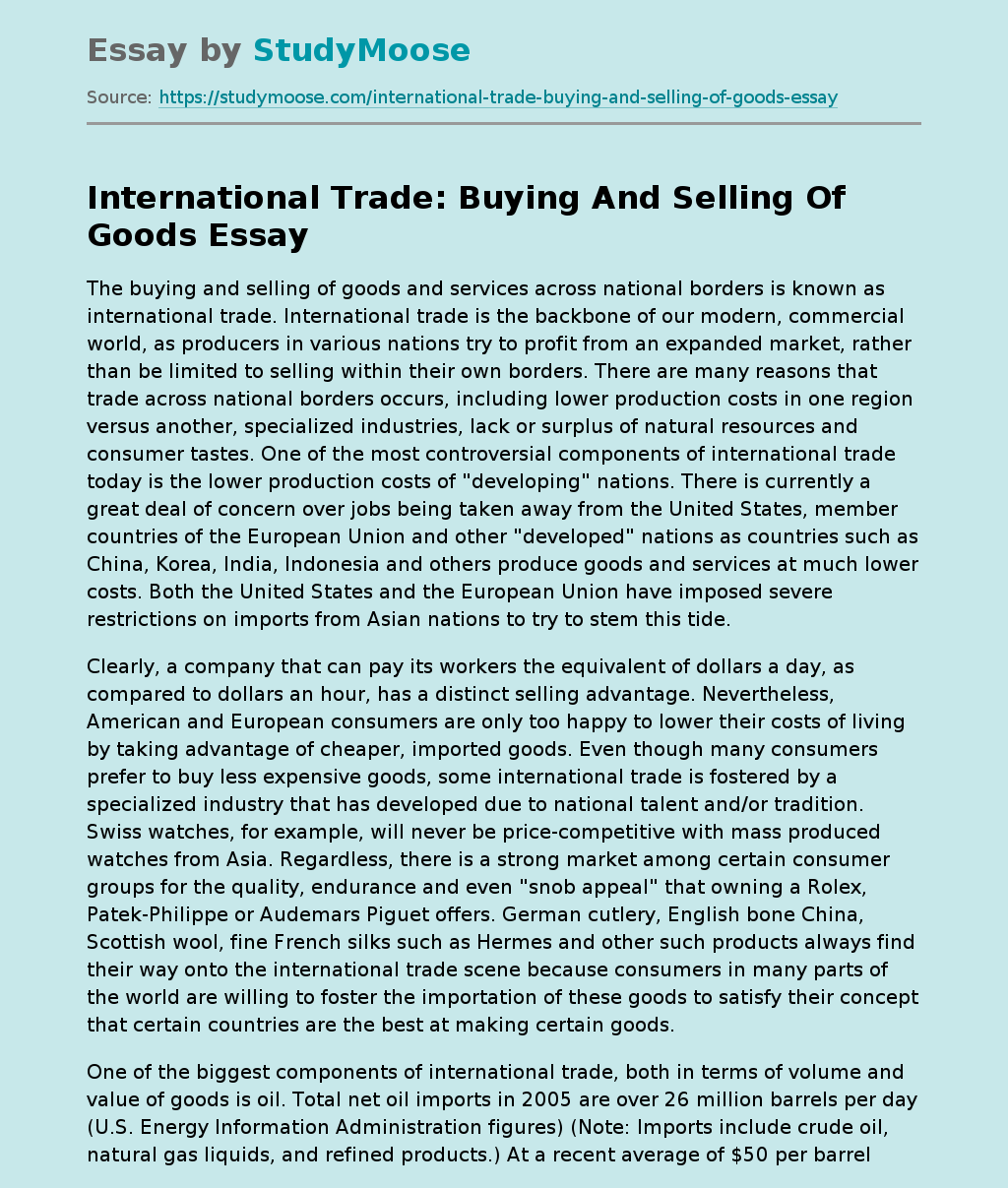