There is no doubt that interest groups play an important role in a democratic society. However, while some are essential in enhancing democracy in the society, some undermine democracy. Democracy can be described as a form of political leadership in which all policies and decisions are arrived at based on the principle of majority rule. In a democratic country, the citizens elect their political representatives after a specified period of time.

Democratic election of representatives is governed by the principles of fairness, political equality and freedom where all the individuals who are eligible voters exercise their rights to make a choice between political partners.

Don't use plagiarized sources.
Get Your Custom Essay on Interest Groups and Democracy Just from $13,9/Page

Interests groups, otherwise known as pressure groups play an important role in the establishment of pluralism in a democratic society. There is no doubt that the political representative in any society does not provide sufficient representation of all the interests in the society.

In any society, there are diverse opinions and interests that the modern democratic structures in the political parties cannot adequately deal with.

This is because of the structures of political parties which aggregate the interests of the society to establish an entity that has the ability to govern the entire country. This makes them disabled to dealing with some basic democracy issues affecting some individuals in the country. The interest groups in such democratic societies enable such individuals’ interests and opinions to be heard and have an influence of the decision making process (Hrebenar, 1999).

Proponents of pressure groups in a democratic society have argued that these groups triumph over the deficits that are inherent in any democracy. It is important to note that there are many factors in the political structures in the society that results into inadequacy in democratic processes and consequently the deficit. One of these factors is the infrequent in which the elections of political representatives are carried out. In many democracies around the world, election of representatives is carried out after five or so years.

For this reason, the majority have an opportunity to participate in a democratic process and influence the decision making process once in a few years. Moreover, the minorities in the society may not be fairly represented in the political parties and therefore have no influence on the democratic processes. In such cases, interests groups play an important role in proving a solution to these inadequacies in the democratic process. Although there are other remedies to the deficits in a democracy, there is no doubt that interest groups enhance democracy (Golden, 1998).

The most important facet of democracy is the participation of the masses in all democratic processes. Interest groups in a society play an important role in promoting political participation in the society. Although voting is the most basic process in a democratic society, it does not provide the people with the ability to influence the politics of the country. People may participate in the voting process but may not have the strength to express their views individually to their representatives.

Moreover, the political parties may not have all the powers to influence the people to participate in essential political practices such as voting. By people coming together which are facilitated by interest groups, they can push forwards their ideas and feelings about a policy issue. Other than influencing each other in making the right decision in the voting process, individuals within an interest group have the ability to take collective actions which will have a greater influence in the decision making process (Jordan & Maloney, 2007).

For example, interest groups who are opposed to gay marriages and abortion can campaign for representatives in the legislature who are pro-life. In so doing, they will be able to influence the outcome of the elections and consequently the decision made by the legislature. This may be the only way through which individuals opposed to such activities in the society can be heard in a democratic society. The same is true for individuals supporting gay marriages and legalization of abortion.

Interest groups also mobilize individuals with certain opinions about governance and decisions made in a democratic country to protest against political decisions that they are not satisfied. Through these street protests, the masses are able to express their dissatisfaction thus enhancing democracy (Bosso, 2003). Interests groups play a complementary role of political parties. It is common for a large number of citizens to rally behind a particular political party but are not satisfied by the running of the party. The majority may be unhappy with the position held by their political party on key issues on governance and legislation.

Proponents of interest groups on a democratic society argue that they disperse the powers of the government. Pressure groups in a country have diverse opinions on key issues affecting the society many of which conflict. Due to the presence of these divergent and conflicting pressures on the government, the authorities and policy makers are compelled to listen to the suggestion brought forward by the interest groups. This way, the government acts as a mediator between interest groups with conflicting issues. This introduces the aspect of bargaining and compromise which is important in any democracy.

It has also been observed that in some democratic countries such as Britain, the people representatives, who are the members of parliament are impaired in their ability to scrutinize the activities of the central government. In such countries, the interest groups play a major role in enhancing democracy by ensuring that the people representatives are informed of public satisfaction with the government activities. The interest groups in this case act as informal researchers who give briefing to the people’s representatives.

They provide a vital channel through which information flows from the public to the government and the reverse. They inform and advise the government as well as the public on appropriate actions to take concerning emerging issues in the society (Ehrman, 1972). Despite these important roles played by the interest groups in promoting democracy in the society, some people have argued that they undermine and distort democracy and political systems in a country. For example, the interest group may represent a minority group in the society but be powerful enough to influence the decision in the country.

This undermines the basic principle of democracy, majority always rules. This happens when the minorities through the powerful interest groups are able to influence decisions and policies that are against the will of the majority. These undemocratic practices that are promoted by interest groups are very common in trade unions and pressure groups with commercial and business affiliations. In many cases, the level of influence by a certain interest group in the country is determined by the financial and economic position of the pressure group or its members.

In many cases, the influence and the position of the general society are not comparable and may be out of proportion (Keohane at al, 2009). Some interest groups are either too powerful or may promote corruption in a country. This limits its ability to promote the democracy and the interests of the general public. For example, interest groups pushing for the interests of the manufactures may be too powerful to influence decisions that favor the manufacturers at the expense of the public. Moreover, such interest groups may finance political campaigns in anticipation that they will obtain favors in the long run.

Secret financial affairs and corruption have also been cited to demonstrate how interest groups undermine democracy (Sudbery, 2003). Opponents of the participation of interest groups in democracy maintain that they promote the inequalities in the society because of the high likelihood of them being influenced by the socially and economically advantaged members of the society. Marxists argue that the principle role of interest groups in a democratic society is to maintain the status quo or make the social divide worse.

They also argue that the view of the government as a mediator between the conflicting interests as a cover-up of the real nature of power. Interests groups can also cause stagnation of democratic evolution in a society where one interest group blocks introduction of new issues in the society. This may limit social and economic development in the society. It is also important to note that the interest groups are subject to individualistic interests. This is mainly because the election of officials and running the affairs of the group in not always done democratically.

It makes no sense how interest groups promote democracy whereas their structures are not democratic (Jordan & Maloney, 2007). In conclusion, interest groups play a major role in promoting or undermining democracy in a country. They are therefore good and at the same time bad in any democratic society. However, the large number of interest groups around the world indicates that they are successful in their mandate. They enable the general members of the public to have an influence on the decision making processes thus enhancing democracy, but can have negative effects if not well regulated. 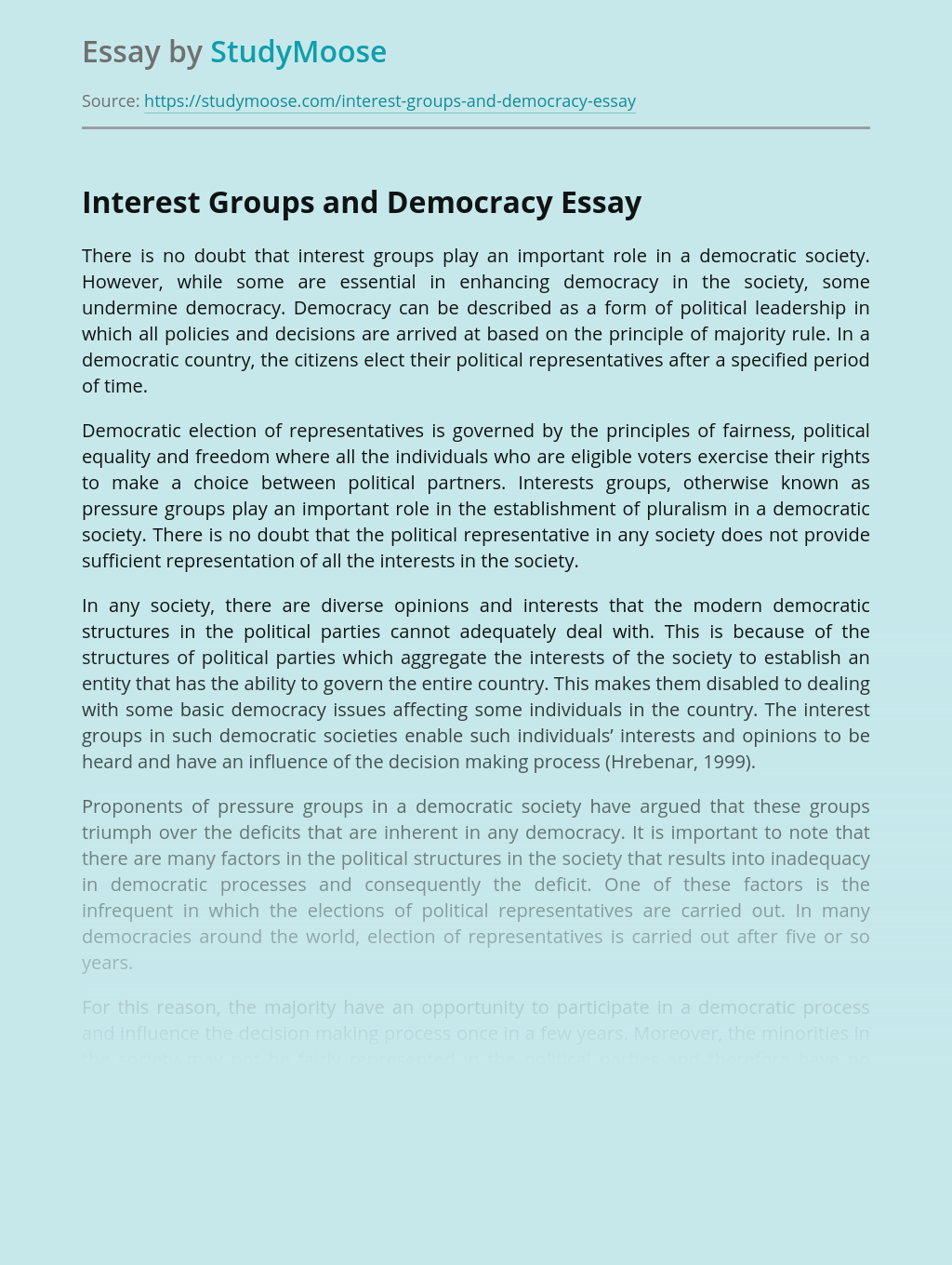 Wendell Phillips’s speech delivered in 1861 near the beginning of the Civil War claims that African Americans ought to be given the right to serve in the military, for different contemporary generals were not of a European background yet brought America prominent success that significantly affected the course of American history. Although African Americans in... VIEW ESSAY

Were Australians against the introduction of conscription during WW1?As the war was happening people back home in Australia were starting to realise that the war was not as much about bravery and pride as they originally thought because very few men were returning, but the government needed young healthy men because of the amount of... VIEW ESSAY

There are a number of factors that will influence the style of leadership a leader may choose, such as: The working environment, The task or project that is being tackled, The staff themselves and their preferred style of working, along with their personal traits and qualities How do you determine what is an appropriate style?... VIEW ESSAY

View sample
Why Elections Are Bad for Democracy

So, the question asks are elections helpful for democracies? When I evaluate this question, I immediately consider the word democracy and the type of democracy that is executed within the U.S. The site “whatisdemocracy.net” explains democracy as the government by the people. The site likewise explains how individuals ought to be able to have their... VIEW ESSAY

There are numerous advantages and disadvantages of both autocratic and democratic federal government, not to mention, lots of apparent differences. Surprisingly, there are likewise some similarities in between these two distinct governing designs. Autocracy as defined by the Merriam Webster online dictionary is, “A government in which someone has endless power.” Opposingly, democracy as defined... VIEW ESSAY