Markets throughout the globe have become more complex and sophisticated, and it has become complicated for marketers to reach their target markets through direct traditional marketing. Thus, organisations have acknowledged the increasing importance of applying the integrated marketing communication (IMC) approach in their marketing strategy. The effective implementation of the IMC approach can facilitate and enhance an organizations communication based on its product offerings whilst simultaneously taking advantage of the various available promotional tools to strategically reach its target audience.

Don't use plagiarized sources.
Get Your Custom Essay on Integrated Marketing Communication at Kentucky Fried Chicken Just from $13,9/Page

Many South African companies have decided to utilise the IMC approach to maximize their return on investments in marketing and promotion.

The objective of these organisations is to effectively and efficiently apply the promotional tools of the IMC through increased understanding of its customers while powerfully communicating its product offerings and thus yielding a positive response with the modern customer to choose its products/services. The IMC process requires marketers to be creative in their approach to communication. Marketers need to think critically of the messages they want to communicate through integrating the elements of the promotional mix which are advertising, direct marketing, interactive marketing, sales promotion and personal selling.

The fast food market is seen with strong exponential growth. The challenge is to develop a competitive edge based on an old need, introducing new and innovative marketing ideas to better the competition. One of the concepts used by KFC is the “Add Hope marketing campaign”. Also, with very intense competition, KFC needs to cut through the clutter using this campaign as a point of difference. The negative stigma on fast foods, regarding health related issues is also a challenge to be addressed. The communication objectives are identified as to cut through the clutter of brands and create a product that is better than the rest by being different and creating campaigns that go further than just the quality of food being sold. The “Add Hope marketing campaign” of KFC will include a thorough discussion of Integrated Marketing Communications (IMC), a brief background of KFC, a description of the “Add Hope marketing campaign”, and a critique of the campaign.

“KFC launched their Add Hope marketing campaign in October 2013, to highlight World Hunger Relief Month and is still running until today due to the immense success. KFC encourages the general public to make a personal contribution toward alleviating hunger in South Africa by adding just two rand to your KFC meal. The money obtained from the Add Hope campaign is used in feeding schemes to reduce hunger in all parts of South Africa.”

TARGET MARKET – KFC’s Add Hope campaign targets all age groups. When one walks into a KFC store, the Add Hope campaign is advertised everywhere, from in-store counter strips , boards, posters, staff t-shirts, caps, badges to serviettes and even an in store porcelain dolly with a money box at the entrance. This encourages all customers to literally add hope. KFC also allows you to add two rand or more to your meal which goes to the add hope campaign. This is directed to the person paying for the meal usually an adult whereas the little dolly with the money box is directed to children as they may find it entertaining to drop a coin or two in the box.

The marketing strategy of using the dolly at the entrance of a store in my opinion is brilliant, as it makes one sympathetic towards a barely real child. COMPETITORS – KFC’s competitors is every other food outlet. KFC’s is by far the first to think of such a campaign. This campaign does not only benefit them with sales but also benefits the entire nation. It’s difficult to get actual competitors in this case as most businesses compete with others for their own benefit.

PERFORMANCE IN ITS MARKET – The KFC Add Hope campaign is very successful as it is running from October 2013. “Consumers have donated over R6 million in R2 coins at KFC restaurants nationwide.” This shows that the campaign’s performance all over the country was a success and is still striving towards success.

MARKETING OBJECTIVES – KFC’s objective is not to only increase sales but also to help their community and the under privileged through their feeding schemes. Every six seconds a child dies of hunger. KFC’s objective is to reduce hunger and poverty nationwide.

MARKETING COMMUNICATIONS OBJECTIVES – KFC’s marketing objective is to make every customer aware of the Add Hope Campaign. This is achieved by advertising the campaign everywhere possible. KFC advertises for the campaign through mass media which is television and radio as well as print media such as billboards, on the serviettes, in store advertising, on the receipt a customer receives after their purchase their meals and as well as the t-shirts and caps that their staff may wear. They also use personal selling, for example when you at the till the cashier may tell you more about the Add Hope campaign or ask if you wish to add R2 to your meal for the Add Hope campaign.

IMAGE – KFC’s image has been improved due to this campaign. Consumers now see KFC as a franchise that is not only concerned about their success but also the well being of the community. Consumers find it more overwhelming to purchase their meals from a franchise of this type as they may feel that they are indirectly making a difference and helping their community in the long run.

POSITIONING – “Positioning is defined as the art and science of fitting the product or service to one or more segments of the broad market in such a way as to set it meaningfully apart from its competitor.” (Book-pg55) KFC achieved this by changing their cultural symbol, Colonel to a child to show that all proceeds from the Add Hope campaign goes to feed a hungry child. 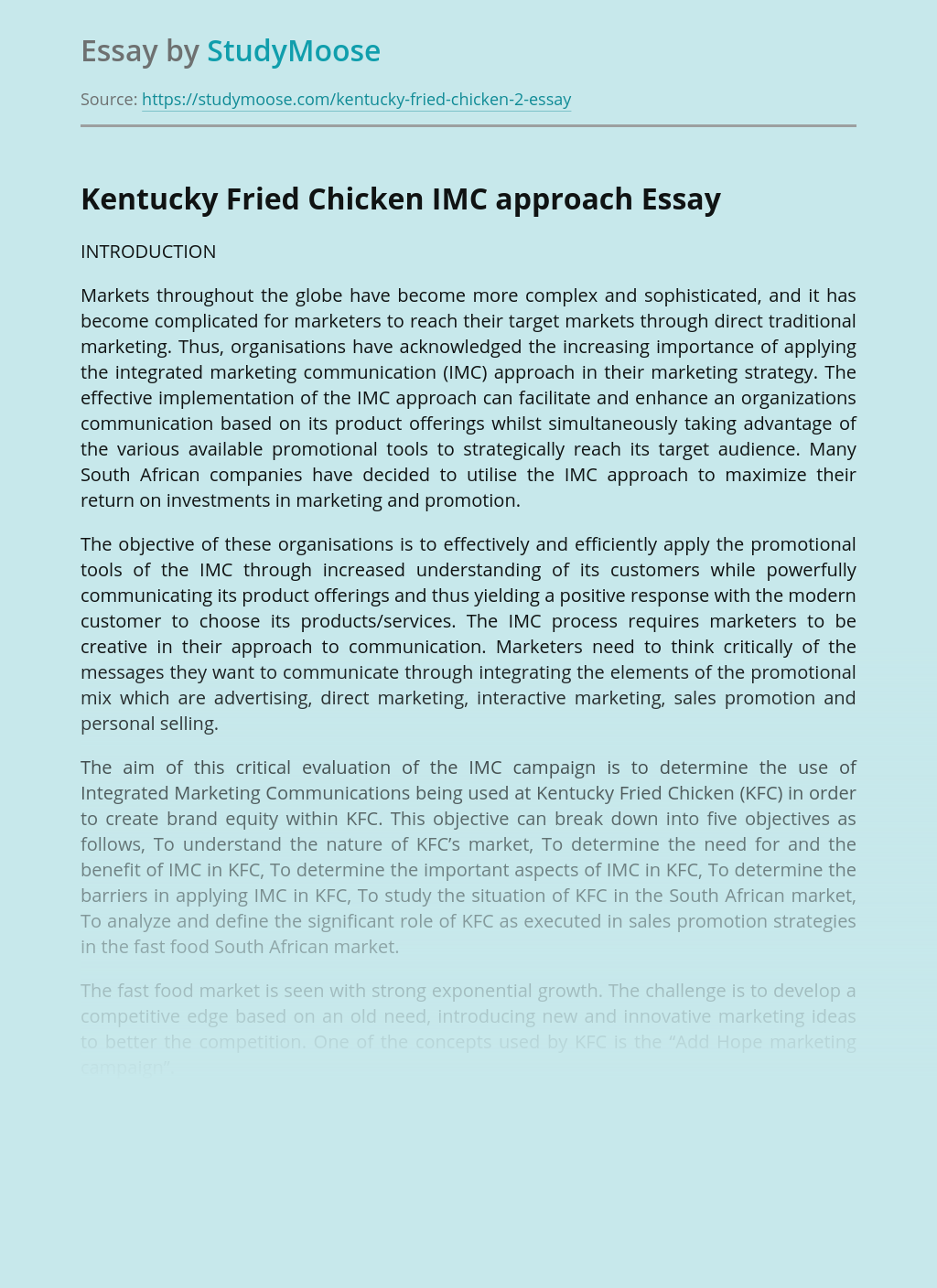 “ Got Milk? ” 1. You are the California Mike Processor Board (CMPB) and your advertising agency was the originator of the successful “got milk? ” campaign. Now all milk producers, including your competition are using the same advertising. How might you establish points of difference from your competitors selling milk? * Spread a new...

The World of Advertisement: Tricks of the Trade

In the era of globalization, advertising plays a major role in the competitive business world. Nowadays we go through thousands of posters, billboards and fliers. Many industries capitalize on the power of advertising to attract or win customers away from their business rivals. The impact of advertising is so huge, that it causes many people...

Introduction The American multinational enterprise, Google Inc., predominately leading the globe in internet services and products. They provide online advertising technologies, search engine, cloud storage, applications and other software. Their customers are advertising agencies and large businesses who pay to be exposed on the many free services Google offers to internet consumers. The largest shareholders...

In developing an advertising program, marketing managers must always start by identifying the targetmarket and buyer motives. Then they can make the five major decisions, known as ? the five Ms?. y Mission:It states the objectives of the advertising. It also includes the sales goals of thecompany. The different company has its own mission, and...

Many people nowadays depend on fast food restaurants in their daily life. Most of them particularly young people prefer to eat fast food such as hamburgers, hot dogs, French fries and pizza. There are many this restaurants are popular. The main ones are that the fast food is easy to get, cheaper, tastes delicious, and...