Innocent Have I Been Tortured, Innocent Must I Die

Witchcraft is seen differently in other cultures and settings. Some cultures such practices are seen as medicine and a of source knowledge. In movies it is seen as something magical and wonderful, but most religions (mostly Christian) see this as heresy and a denouncement of god. It was believed the Devil could give certain people known as witches the power to harm others in return for their loyalty. This witchcraft craze went on from the 1300s to late 1600s. Two rather famous witch trials are the ones of Salem, Massachusetts and The burgomaster, or mayor of Bamberg, Germany.

Don't use plagiarized sources. Get your custom essay on
“ Innocent Have I Been Tortured, Innocent Must I Die ”
Get custom paper
NEW! smart matching with writer

Innocent Have I Been Tortured, Innocent Must I Die” the letter Mayor Johannes Junis wrote to his daughter Veronica during the witch trial. The trial and letter took place in the cathedral city of Bamberg, Germany. In the letter Junis tells what happened. Junis tells what he confessed to be set free: “Then I had to tell what crimes I had committed. I said nothing…” Pg.

He then writes “I said That I was to kill my children, but I had killed a horse instead. It did not help I. I had also taken a sacred wafer, and had desecrated it. When I had said this, they left me in peace. ” Pg. 5 The only way for Junis to get out of being tortured and executed was to confess of being a witch. In the letter the executioner says: “Sir, I beg you, for god’s sake confess something, whether it be true or not.

” Pg. 34. Junis now writes: “Now my dear child, see in what hazard I stood and still stand. I must say that I am a witch though I am not—- must now renounce go though I have never done it before. ” Pg. 34 Junis’ wrote this letter to his daughter so that she would know what was really happening to the trial victims, how he was tortured and what he had to do in the end.

The record of Junius’ trial is in the town library to this day, which contains the letter he wrote to his daughter. Another reason he probably wrote this letter was so that his story would be heard and his family would not be shameful for being related to a witch. The Salem Witch Trials also took place in the 1600s they same time as Junis’ Trial. Both events were very similar. At the time witchcraft accusations were being thrown left and right and if you did not confess to your “crimes” you would be put to death. Both events also had their differences.

In Salem 200 people were accused of witchcraft where in Germany there were only a few accused. Also the Salem trials were in a colony were there was no real power other than a pastor where as Germany was a developed country with laws. The relation between these events are very close. They both involved the accusations of witchcraft and had people put to death for not confessing. In conclusion both the Salem witch trials and the Trials of Johannes Junis are both related in time and subject and are both very famous to this day.

Innocent Have I Been Tortured, Innocent Must I Die. (2020, Jun 02). Retrieved from https://studymoose.com/innocent-tortured-innocent-must-die-new-essay 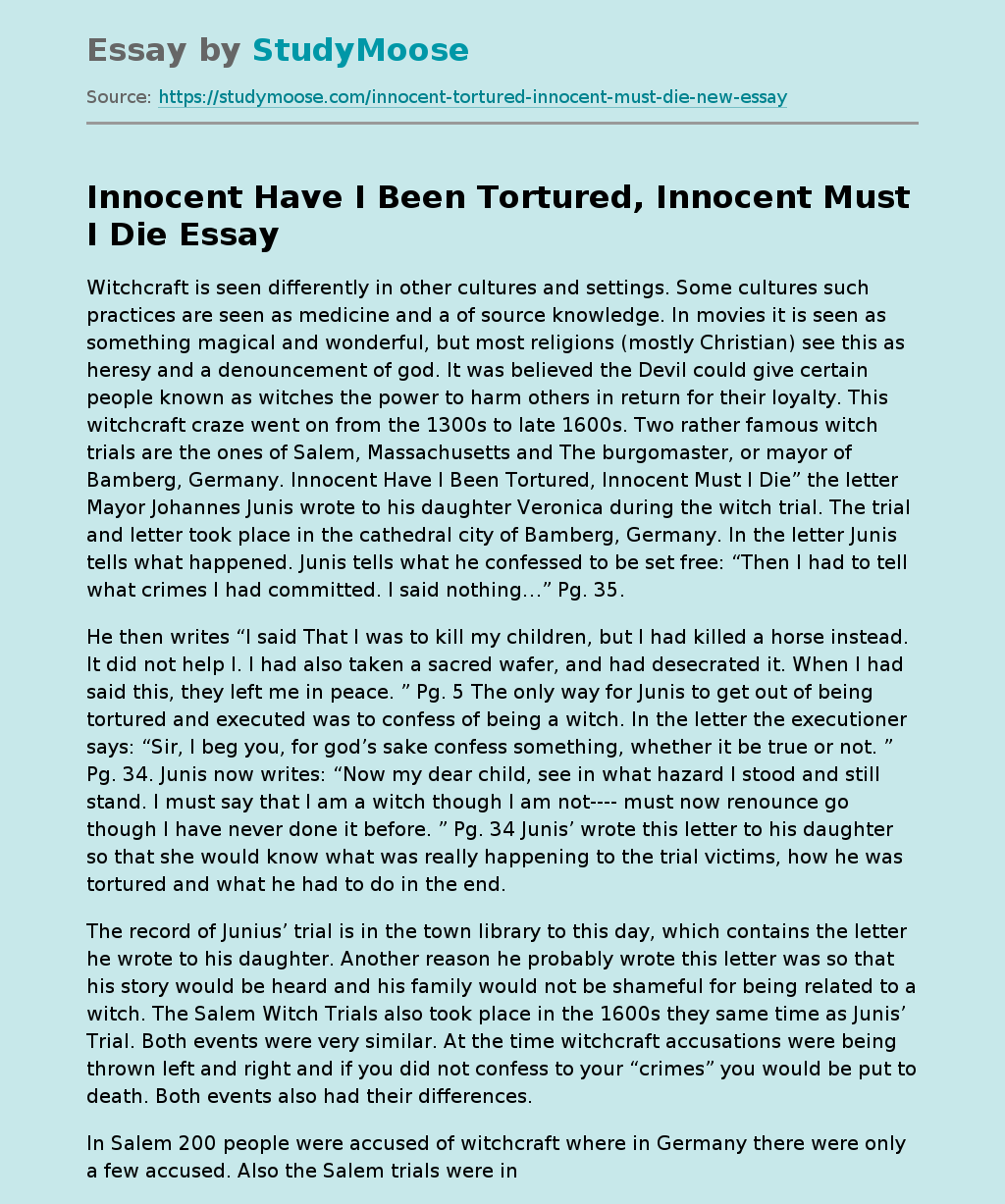