Death is inevitable and everyone must be ready to face death. The author of, “If we must die” makes use of different literary devices to describe death and to encourage people to be brave and not to fear death. People should not just die like hogs or dogs although human beings are far outnumbered by death, they must remain brave to face death when it comes. Death does not have shame, it gets whoever it wants and at the time it best things is right.

Don't use plagiarized sources. Get your custom essay on
“ Dying a noble Death ”
Get custom paper
NEW! smart matching with writer

Death is a coward since it cannot come to people when they know or when they expect.

Analysis of the Poem

The poem by Mr. Claude McKay, “If we must die”, written to urge the black people to fight for their freedom against the oppressions of the whites, portrays different literary devices used to bring out the message of the poem to the reader (Charters, and Samuel, 896).

The various devices used in the poem include allegory, rhyme, metaphor which involves animal imagery, as observed in various likes through the use of different words such as “hogs,” in line 1 and other words such as “hunted, ” “penned,” which are found in line 2 (Charters, and Samuel, 896). Furthermore, the author uses words such as “mad and hungry dogs,” and “bark” found in line 3 of the poem, “monsters,” in line 7 and the word “cowardly pack” in line 13 to show animal imagery for the reader (Charters, and Samuel, 896).

The use of hyperbole is observed when the author writes the words, “If we must die, let it not be like hogs” found in line 1 of the poem as well as, “and for their thousand blows deal one death-blow” in line 11 (Charters, and Samuel, 896). Furthermore, the author of the poem has used onomatopoeia which is observed through the word “bark” (Charters, and Samuel, 896). To make the reader more intrigued and part of the poem, the author poses a question that is rhetorical which is found in line 12 where he says “What though before us lies the open grave?”

The use of this question is intended to act as a reminder to the reader that death is inevitable and everyone will face death at one point in life and what do human beings face to lose when they die? The author of this poem uses most of these literary devices as a way of creating a sense of urgency so that the reader is always ready and aware of the happenings in life and about death (Charters, and Samuel, 896). The author has also written the poem using 14 lines in addition to the rhyme scheme which has been used of ababcdcdefefgg hence making it a Shakespeare sonnet (Charters, and Samuel, 896). The other literary device the author has used is repetition which is seen through words such as “If we must die” which has been repeated in the poem two times in line 1 and line 5.

Every human being is bound to face death when their time comes. This does not mean that people should not be ready and do their best to fight against injustice and oppression which leads to the death of human beings. By using the different literary devices, the author of the poem encourages people to be brave against death and should not fear when they are faced with circumstances. 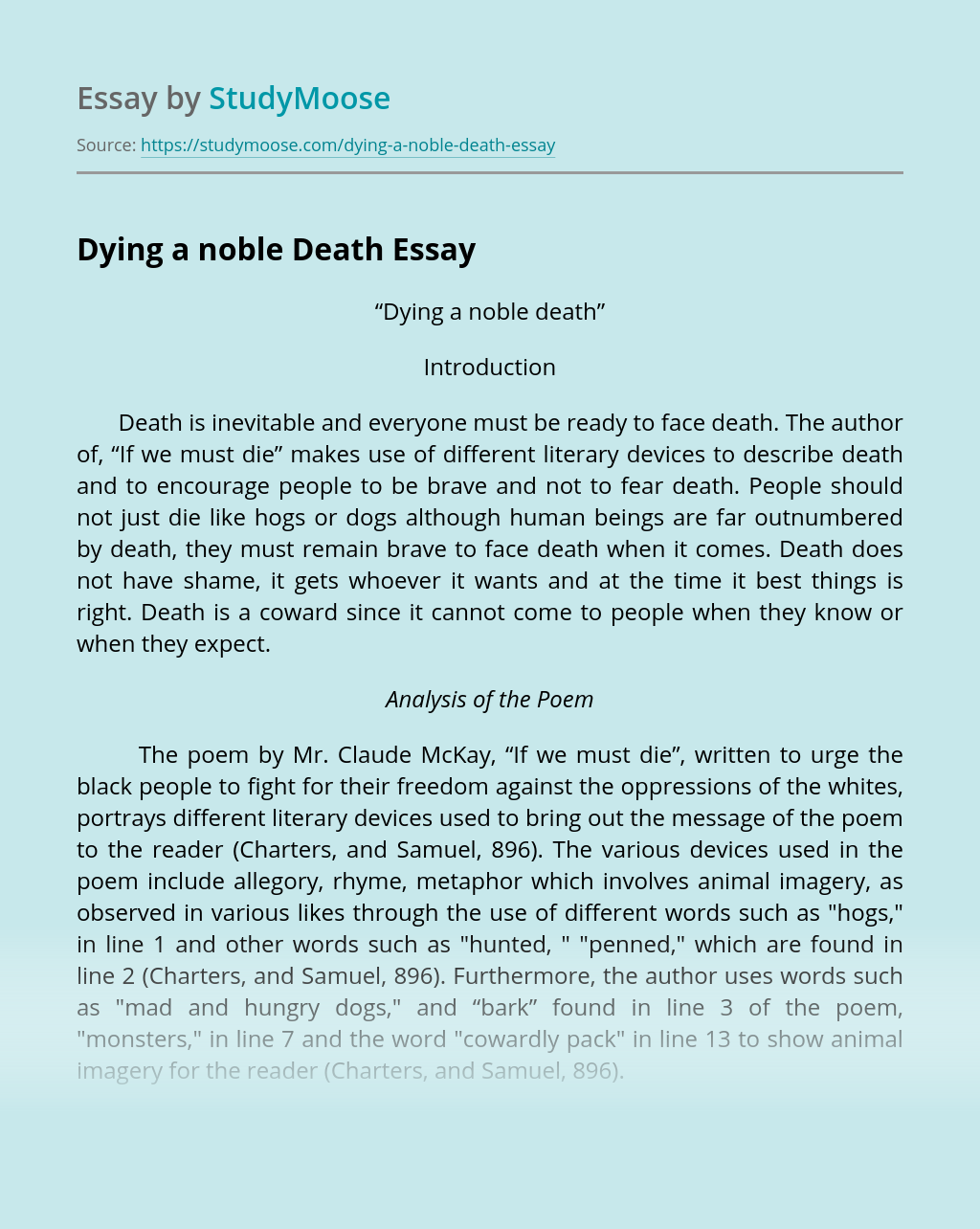