Influence of Women in The Great Gatsby

Though the Great Gatsby is a male dominated book, there are a few women who have great influences. Daisy Buchannan is the main female character, having romantic relations with both Tom Buchanan and Jay Gatsby. Myrtle Wilson is a woman who is married to a hardworking man, but she remained unfaithful throughout the length of the novel. Lastly, Jordan Baker is probably the least mentioned woman but had an equally important role as the others. Fitzgerald used the development of the three women to further the plot and theme of the book and show the treatment and role of women in that society at that time.

Don't use plagiarized sources. Get your custom essay on
“ Influence of Women in The Great Gatsby ”
Get custom paper
NEW! smart matching with writer

Daisy Buchannan is introduced in the first chapter at a gathering in her home. Nick describes her as a rich and confident wife. She even calls herself “sophisticated” (Gatsby 17). But she is treated as the lesser of her husband; her face is “sad and lovely” (Gatsby 9) due to being constantly interrupted and her comments pushed aside.

As the evening goes on, Daisy begins to appear more unconfident than she thinks she is, naming places she had been to impress Nick. Even when asked about her daughter she describes that she hopes that she would grow up to be “a beautiful little fool” (Gatsby 17).

Though she acts like this fact was the normal place for a female, her disposition is shown to want this to be different, showing that even in the lives of the rich and wealthy, women are still treated as lesser individuals. She, unlike the other characters, has monumental descriptions, sometimes spanning paragraphs.

But instead of focusing on her physical appearance, Fitzgerald draws attention to things such as her voice, calling it “a wild tonic in the rain…following the sound up and down before any words came through” (Gatsby 85).

When she goes to wash her face, Nick says “with humiliation of [his] towels” (Gatsby 89) Even in everyday conversations, Daisy is ignored, not because she is woman but because of her beauty. Fitzgerald puts these things in to show just how deep the trap that women are in; their beauty is mesmerizing but not enough for all of the men’s attention.

Myrtle Wilson is the other partner in Tom Buchannan’s affair. She is of a simpler lifestyle living on the “edge of the wasteland…contiguous to absolutely nothing.”(Gatsby 24). Nick describes her “a thick woman” “in [her] middle thirties” (Gatsby 25), the average woman in that time. Once she and Tom get off the train, she immediately buys a dog, and then makes a point to buy a rather expensive dog as well. When she arrives to her sister’s house, where a party is taking place, Nick says that she “changed her costume” (Gatsby 30). Because a costume is also the attire performers wear, Nick is giving us the impression that all of this is a play, a facade to act wealthy when in fact she is not.

Nick also says “with the influence of the dress her personality had also undergone a change. The intense vitality that had been so remarkable in the garage was converted into impressive hauteur” (Gatsby 30), again another indicator of her “performance” of a wealthy woman. Soon, she and Tom “discuss in impassioned voices” whether she had any “right to mention Daisy’s name” (Gatsby 37). Tom punches her after this, but still left the party with her. Myrtle is now a woman with no self-respect, due to her allowing a man, though he may be rich, to physically assault her, instead of having a man who truly cares for her not being well off.

Jordan Baker is not talked about much in the book until the third chapter. Nick talks about her “incurable dishonesty” (Gatsby 58), but then says “Dishonesty in a woman is thing you never blame deeply” (Gatsby 58), suggesting something has happened in her past causing her to be dishonest. She then shows her roots as one of the outgoing “West Eggers”, complaining that the party “is much too polite” for her taste. Fitzgerald uses Jordan to show that not all of the West Egg is elite. Some are just normal people wo happen to be on the wealthier side of things.

By bringing these women together, Fitzgerald shows all aspects of life, from the wealthy but mistreat, to the women who think money is everything, and the ladies who simply are themselves. Daisy, Myrtle, and Jordan all display drastically different personalities but share the same

Influence of Women in The Great Gatsby. (2016, May 18). Retrieved from https://studymoose.com/influence-of-women-in-the-great-gatsby-essay 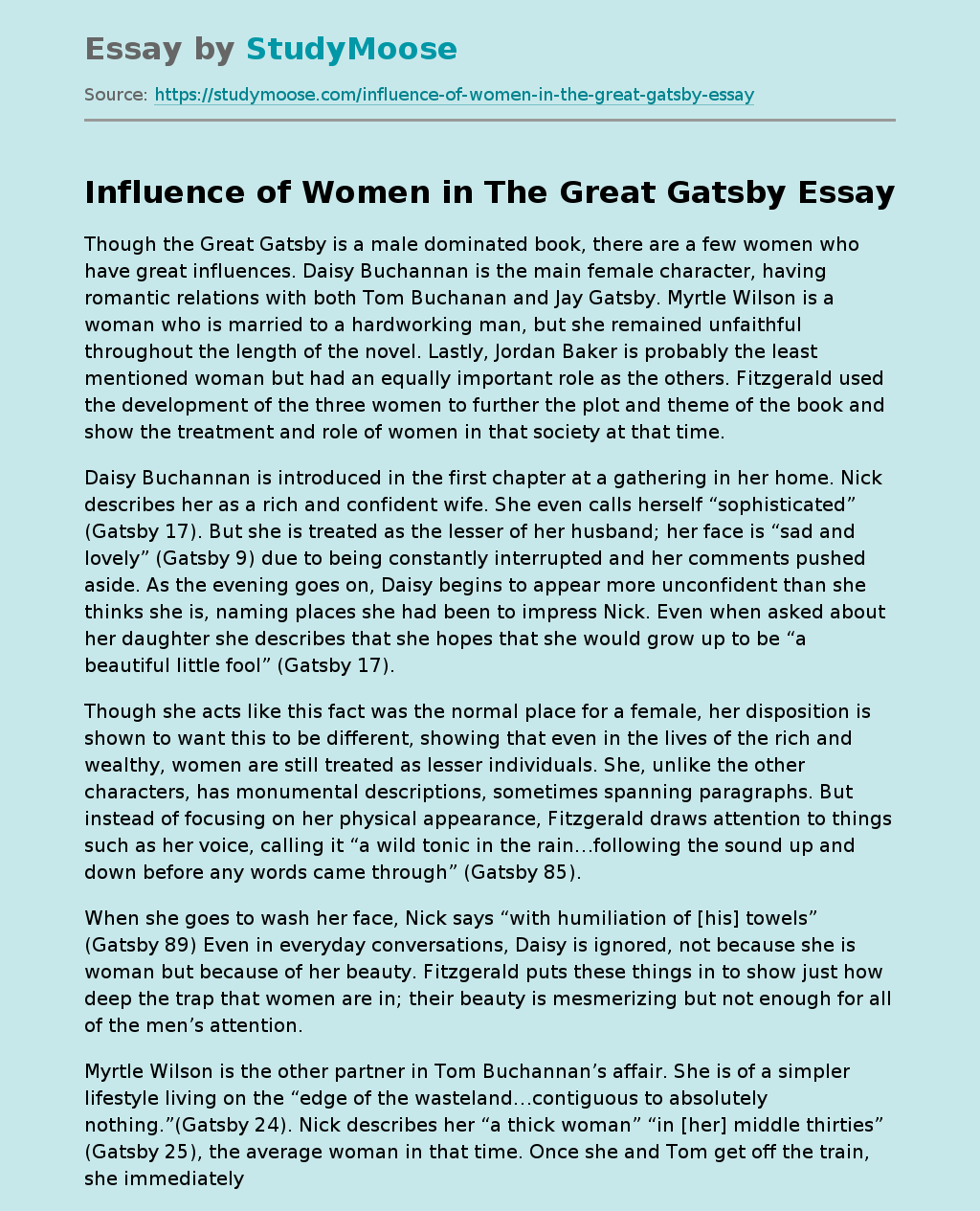