Family in Mary Shelley’s Frankenstein demonstrates a myriad of roles, influencing Victor Frankenstein and his creation. Victor’s childhood establishes a connection between the reader and Victor, building his character. The monster is influenced by the various episodes with the family of cottagers

The recounting of Victor’s childhood coalesce the reader to Victor, conveying his affection for his family. “No human being could have passed a happier childhood than myself…it was the secrets if heaven and earth that I desired to learn”(23).

Don't use plagiarized sources. Get your custom essay on
“ Influence of “family” in Mary Shelley’s “Frankenstein” ”
Get custom paper
NEW! smart matching with writer

This close rapport rationalizes his intense abhorrence for the monster. There is a reciprocated need for support and care between Victor and his family. At the most abject times, nothing “could have given [him] greater pleasure than the arrival of [his] father”(165), indicating his need for support from his father. Victor’s care for his family has an ever-lasting role in the novel. This is what drives him towards destroying his creation. Finally, upon hearing of the death of William, and subsequent framing of Justine, “[he] was seized by remorse and the sense of guilt, which hurried [him] away to a hell of intense tortures such as no language can describe”(74).

It was this care for his family, which led him to realize the need for his acknowledgement of the presence of his creation, and bring an end to its being.

Analogous to the Frankenstein family’s influence on Victor, the family of cottagers influence the monster. Firstly, the monster aspires to become like them, even though the cottagers live in dismal and appalling conditions, emphasizing on the monsters wretched situation.

According to the monster, “they possessed a delightful house (for such it was in my eyes) and every luxury…and still more, they enjoyed one another’s company and speech”(95,96). This founds a sense of sympathy with the monster, portraying him as callow and innocent. This sympathy is augmented when the monster does not retaliate to Felix’s attacks. “I could have torn him limb from limb…but my heart sank within me”(120).

The experiences with the cottagers project the monsters benevolence by conveying his care for them. “I found that in doing this I inflicted pain on the cottagers, I abstained”(96). “I often took his tools…and brought home firing sufficient for the consumption of several days”(96). The incidents with the family sharply comment on mans shallowness. While earlier, others spurned and censured the monster; Delacey, unable to see the monster, accepts him. On hearing part of the monsters situation, he responds by saying that, “To be friendless is indeed to be unfortunate”(118). This emphasises on the point that others did not accept the monster only because of his menacing appearance, and were unwilling to hear him out.

While the Frankenstein family establishes a connection between the reader and Victor, fostering feelings of compassion for his conditions, the family of cottagers do the same for the monster. The issues delved into by the families are multitudinous. While the Frankenstein family personifies the weight of keeping acquaintances with loved ones, the family of cottagers expose the shallowness of man, through the incident with Delacey and the monster. This adds a new angle to the novel by inducing sympathy in the reader for the monster. Therefore, family in Mary Shelley’s Frankenstein display a large part, both in proliferation of plot as well as theme. 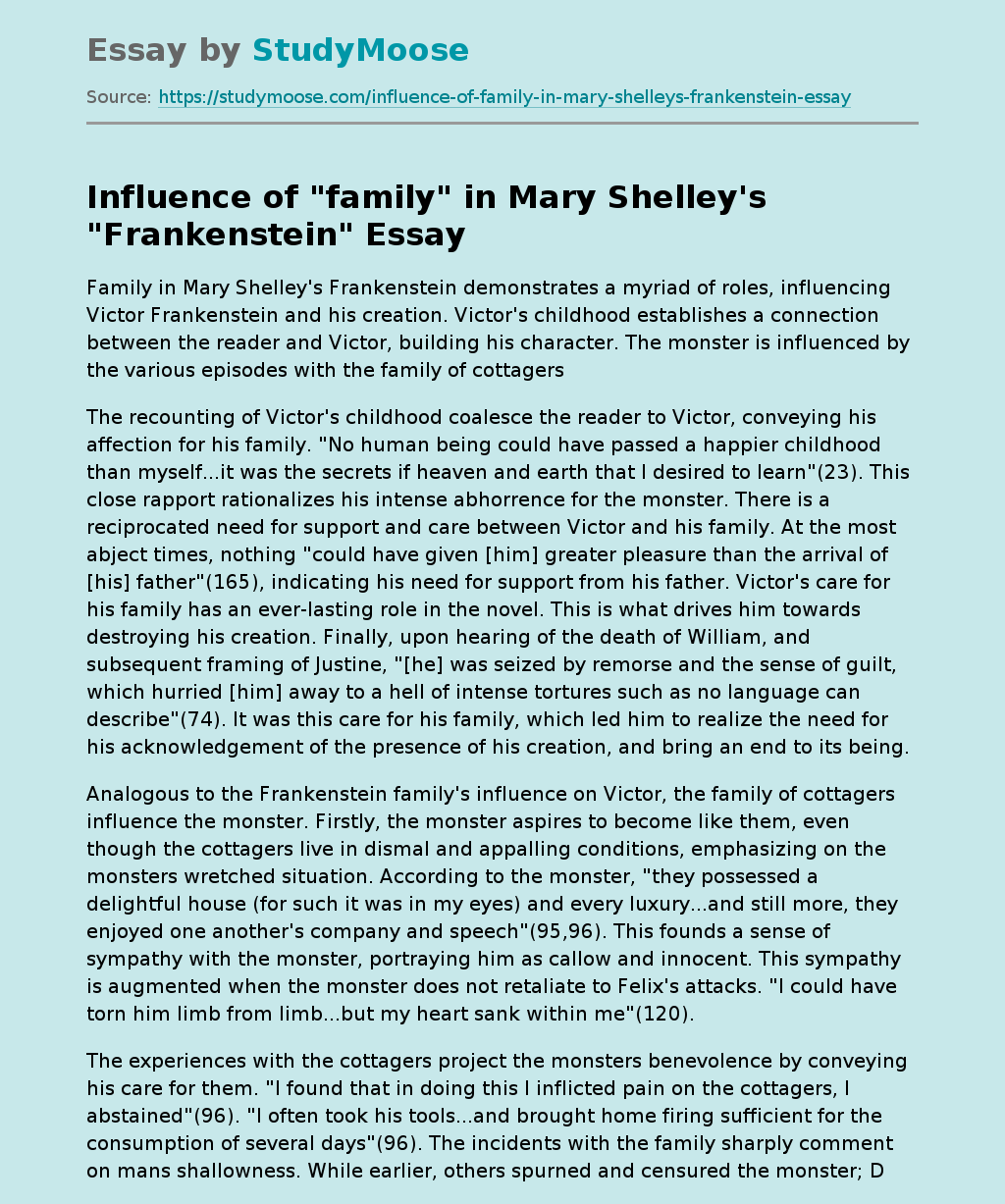