Influence of Buddhism in the Catcher in the Rye

J.D. Salinger, the author of The Catcher in the Rye, witnessed the atrocities of the Second World War firsthand as a soldier. In doing so, the horrors that he saw gave him concerns about his society. The fact that his native society could do such things repelled him. As a result, he began to read about Eastern Philosophy after the war. The eastern principles he learned about were appealing to him, so he decided to model Holden Caulfield, the protagonist in The Catcher in the Rye, after Siddhartha Gautama, who is commonly known as The Buddha.

Don't use plagiarized sources. Get your custom essay on
“ Influence of Buddhism in the Catcher in the Rye ”
Get custom paper
NEW! smart matching with writer

Siddhartha was a Prince whose father hid from him the atrocities of humankind, but when Siddhartha eventually did see poverty, he was dejected.

He decided to become an ascetic, a lifestyle where one supplies himself with minimal materials. Eventually Siddhartha achieved enlightenment, and he created the principles of Buddhism. In The Catcher in the Rye, Holden is born into a wealthy family and attends a prestigious boarding school, although he is kicked out early in the novel.

Salinger makes Holden’s life very similar to that of Siddhartha Gautama’s. Holden’s story mirrors that of the Buddha’s because poverty and sickness call them into action, they are displeased by the idea that people are not created equally, and they both veer of the path that has been set out for them.

Holden and Siddhartha come across the unpleasant things in life for the first time in very different ways. Siddhartha is twenty-nine years old when he first sees an old man, after being sheltered for the early portion of his life, while Holden is just thirteen years old when his younger brother, Allie, grows sick and dies.

When Siddhartha comes across poverty, it inspires him to devote the rest of his life to trying to end suffering. On the night that Allie died, Holden slept in the garage and, “…broke all of the goddam windows with my fist” (Salinger 39). Holden is irate because he couldn’t save Allie from death, the same way Siddhartha was displeased by the fact that he couldn’t save people either, the people that he was supposed to rule over someday, from poverty and suffering.

Additionally, Holden, like the Buddha, enjoys helping out those in need. When Holden sees two nuns in Grand Central Station, he strikes up a conversation, and then gives them ten dollars as a donation. That amount of money is equivalent to around ninety-five dollars today. Later on, he says, “I started getting sorry that I’d only given them ten bucks for their collection”(Salinger 113). Instead of being happy in giving his donation, he is unhappy because he knows that what he has given is still not nearly enough to make a substantial dent in the poverty of the world. Nonetheless, Holden still strives to protect those who cannot protect themselves from the negative aspects of life, just as the Buddha endeavors to save humanity for suffering.

One of the lessons that Siddhartha Gautama taught to his Buddhist followers was to reject the traditional class system. The Hindu people of India follow the belief of reincarnation, and that people are born into their social class based on how well they lived their previous lives, and thus those who are born into a low class deserve to be there. However, Buddha rejected that class system, preferring a society without classes, because he believed that all men should be treated as equals. Holden also believes that all men are created equal. In his conversation with his history teacher, Mr. Spencer, Holden says to himself in response to Mr. Spencer’s remark that life is a game that, “If you get on the side where all the hot-shots are, then it’s a game,…but if you get on the other side…then what’s a game about it” (Salinger 8).

Holden doesn’t think that life should be better for some people than others just because they were born wealthy or have superior traits and abilities than others. He believes that no matter what someone’s social status is, he or she should be entitled to the same things as a wealthy person. When he sees the nuns in Grand Central Station, he is depressed when he sees what they are eating. He says “I hate it if I’m eating bacon and eggs or something and somebody else is only eating toast and coffee” (Salinger 110). Holden is from a wealthy family, and is saddened by the fact that not everyone can experience the same luxuries that he can. The Buddha was also saddened by the same thing; he could not provide his people with the same amenities that are given to him. For that reason both Holden and Siddhartha wish to find a better way to organize society than the traditional class system.

Holden could easily choose to apply himself in school, go to college and get a well-paying job. However, the idea of following the path that society has set out for him displeases Holden, and he desires to create a new path for himself. Near the end of the book, Holden envisions himself hitchhiking out west and living in a cabin for the rest of his life. He exclaims, “I got excited as hell thinking about it” (Salinger 199). He falls in love with the thought of himself rebelling against society; the society that was the cause of so much poverty.

Likewise, Siddhartha Gautama, a prince, chose not to live his life as royalty, which was expected of him, but rather become an ascetic, denying himself of worldly pleasures, as he strove to find a way to end suffering. Siddhartha found success, and he achieved enlightenment, as well as a way to end suffering, which is what Buddhism is. On the other hand, Holden found it to be difficult to break away from his path that is set before him. In response to Holden’s idea to run away, Sally, a friend of Holden, retorts, “You can’t just do something like that” (Salinger 132). Holden struggles to relate with fellow members of his society, and when they strike down his ideas, he finds it to be even harder to connect with them.

Holden’s journey resembles the Buddha’s in three significant ways: he is inspired to end suffering, he believes that everybody should have the same opportunities in life, and he is determined to separate himself from his culture. But perhaps J.D. Salinger did not mirror Holden’s life after the Buddha’s, but after his own. Salinger also saw great suffering when he participated in World War Two. He refuted the values of Western Civilization, wondering how such great atrocities could be committed in it. Holden’s clash with his native land bears striking resemblance to that of Salinger’s. Salinger expresses his beliefs through Holden in the novel.

Holden says, “I don’t think I could stand it if I had to go to war. I really couldn’t.” Salinger could not stand being in the war, just as Holden cannot stand the thought of being in it. Eastern philosophy influenced Salinger greatly after he served in the war, and in turn The Catcher in the Rye is influenced by that philosophy. Salinger subtly teaches his readers about Eastern philosophy as they follow Holden’s journey. Salinger attempts to push the reader into their own journey, in which he or she might wrestle between Western and Eastern thought in a similar way as he did.

Influence of Buddhism in the Catcher in the Rye. (2017, Feb 07). Retrieved from http://studymoose.com/influence-of-buddhism-in-the-catcher-in-the-rye-essay 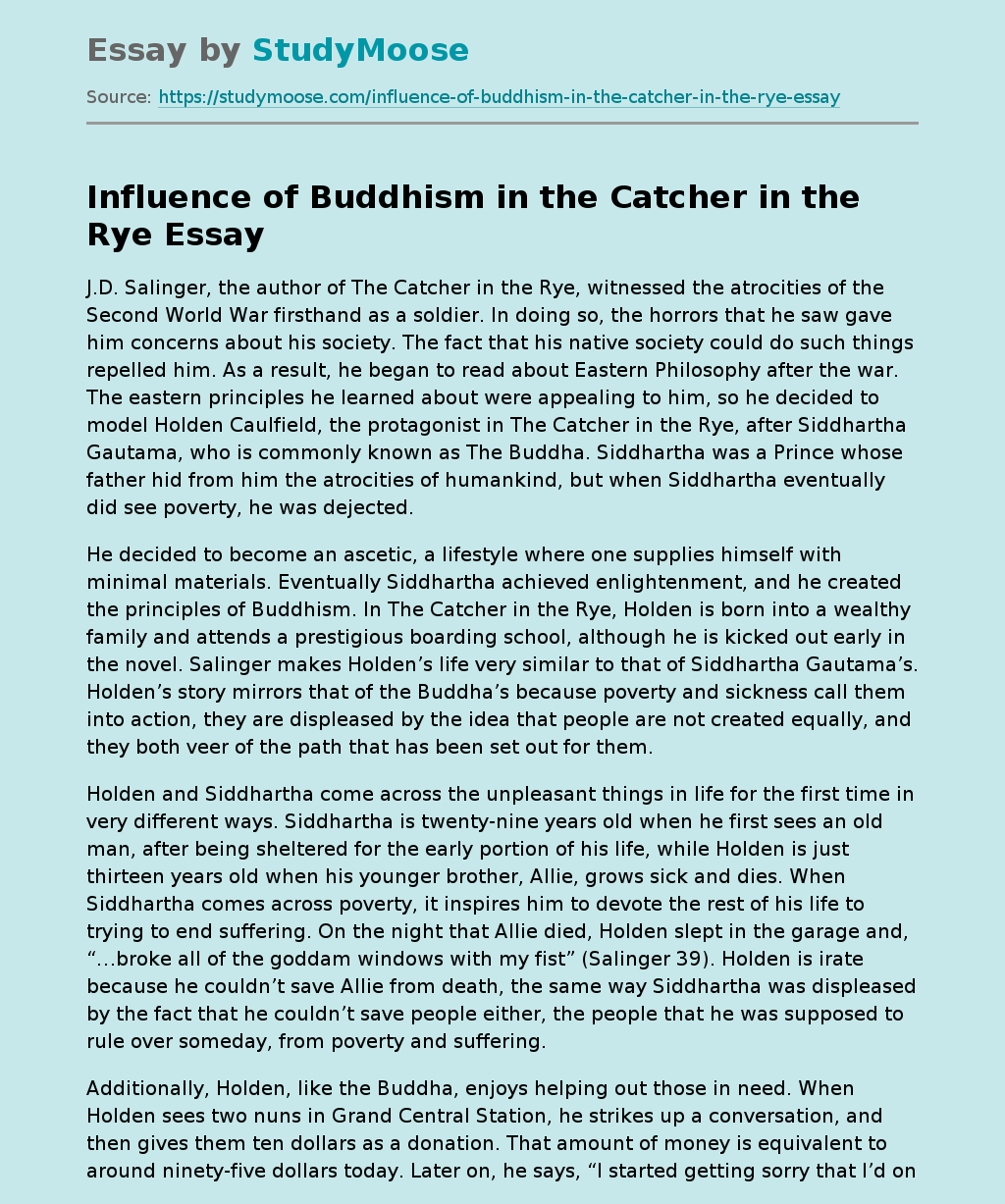