Ethan Frome was published in 1911 by Edith Wharton, a prominent American author and Pulitzer Prize winner (though that came later, in 1921). The novella is set in Starkfield, a small town in Massachusetts that is extremely isolated. It begins with a narrator attempting to piece together the details of Ethan Frome’s mysterious ‘smash-up’ and how he came to be crippled not only physically, but also emotionally. The book goes into an extended flashback of life before the accident, when Ethan is young and healthy, but also as his marriage is failing, and after his dreams of college and a career are crushed by his father’s death.

The story continues, and ends with the truth about what happened that night of the unfortunate incident. This book is well worth the read, both for Wharton’s artistic prose and for the twist at the end of the story.Edith Wharton creates stark contrast between ‘past Ethan’ and ‘present Ethan’ by using descriptive flashbacks and highlighting the carefree happiness of youth: Contrasted with the present reality of his physical disability and tragic state of mind: Wharton creates this clear opposition between Ethan’s youth and his latter years by evoking images and emotions through her artistic, descriptive prose.

A major theme of the novella is fate and how people react to life’s challenges. Ethan, for example, becomes bitter after the so called ‘smash-up’, but his problems had been building up throughout his entire life. After the ‘smash-up’ all of the disappointments come to a head: his dreams of college and a career, of a healthy marriage, all vanished.

Rather than deal directly with his problems, he fantasizes about another woman (Mattie) to escape from his depressing life. Harmon Gow, neighbor, describes Ethan’s hard life, summing it up with “Sickness and trouble: that’s what Ethan’s had his plate full up with, ever since the very first helping.” (Paragraph 28) Wharton uses flashback and present time to explain Ethan Frome. He can be understood by studying the forces acting upon him and his response to those forces. His college studies were cut short by “his father’s death, and the misfortunes following it”. His marriage to a sickly, bitter wife pushes him to fantasize about Mattie Silver.

For example, when he is spying on her at a village dance, “[his] heart was beating fast. He had been straining for a glimpse of the dark head under the cherry-coloured scarf and it vexed him that another eye should have been quicker than his.” (Chapter I). Rather than face the reality of a failing marriage and a lost career opportunity, Ethan decides to indulge fantasies and, in later life, bitterness. Frome has given in to his fate; a fatalistic worldview has crippled his ability to rise above and overcome his sadness. A prime example of Wharton’s style follows: Wharton’s masterful use of imagery paints a scene in the mind: color words are prominent, as are metaphor and simile. For example, “sky of iron” and “the points of the Dipper hung like icicles” both refer back to stars and the sky, which gives a feeling of magic and beauty to the winter night. This accomplishes Wharton’s purpose of not simply telling a story, but allowing the observer to experience the environment themselves. 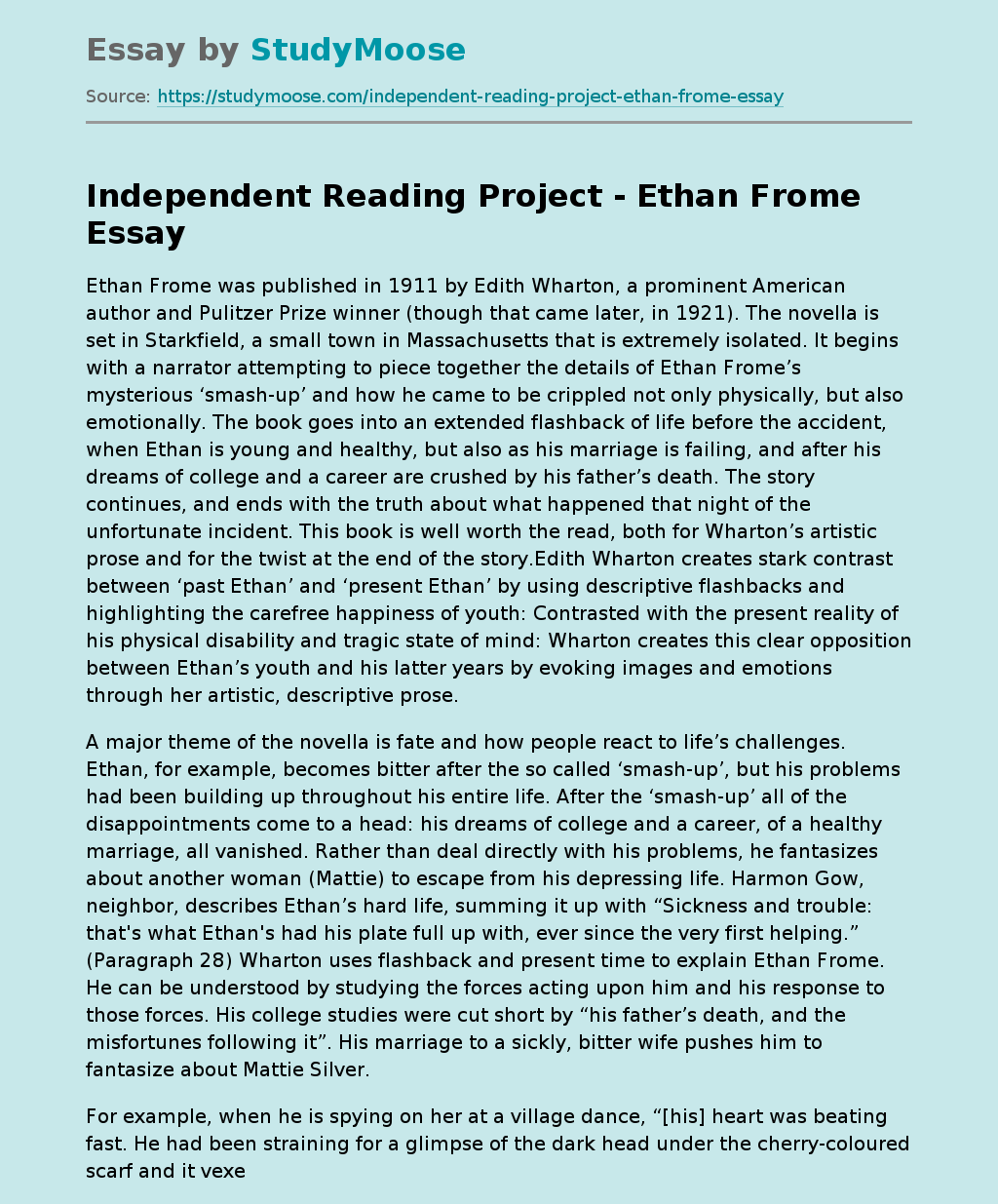