In Search of Respect: Selling Crack in El Barrio by Philippe Bourgois – A Reaction Paper

In chapter 7 of his book, In Search of Respect, Selling Crack in El Barrio, Philippe Bourgois begins his commentary on “Families and Children in Pain” by countering the view set forth by developmental psychologists that a large chunk of a person’s character is shaped during infancy or as a result of  “early childhood socialization experiences… (which) ignores historical processes and the effects of unequal power relations around class, ethnic, or gender and sexual categories” (Bourgois, 2003, p. 259).

To my mind, developmental psychologists do have a point and make much sense in postulating that a person’s journey of scars begins at childhood.

Don't use plagiarized sources. Get your custom essay on
“ In Search of Respect: Selling Crack in El Barrio by Philippe Bourgois – A Reaction Paper ”
Get custom paper
NEW! smart matching with writer

That is the time, after all, when cognitive development starts, albeit in gradual stages. Early interaction with people somehow shapes the key concepts learned and carried over into the next stages of life.

Bourgois assumes a deriding stance in citing the survey methods employed by these psychologists, but falls trap to faulty reasoning and generalization. In any case, Bourgois makes a clear point when he underscores that social inequalities created by poverty and the concomitant festering living conditions — determined in most cases by a country or community’s historical circumstances — are the very things that endanger or render families and children vulnerable to being instruments of crime and other societal ills.

Bourgois arrives at his assumptions and conclusions through close encounters and conversations with the socially marginalized drug dealers and youngsters surviving amidst the jagged edges of New York’s  East Harlem vicinity.

By immersing himself in this neighborhood for several years, Bourgois learned about the sentiments and dreams that young people nurtured while growing up as part of fragmented families subsisting on the drug trade and bearing the impact of an overall destructive environment.

The author clearly illustrates the pathetic plight of children who start out impressionable and are filled with bright hopes about their future, only to have their dreams and ambitions crushed  or to end up being cheated out of their future by falling into the abyss of poverty & desolation. If the children do end up mired in the vicious cycle of poverty and crime, it is not because they willed it.

The author states matter-of-factly that crack sellers and users – including children who eventually fall into it through close association with adults operating the crack cocaine business in their seedy inner-city neighborhood – fall into a lifetime pattern of crime because of their social circumstances in life.

As far as children of  marginalized Puerto Rican immigrant families who settled in New York City are concerned, being “socialized into the normalcy of drug dealing” (Bourgois, 2003, p. 265) carries enormous risks of having their freedom impinged & their  life curtailed.  Yet the children living within crackdealing neighborhoods have very little or no options. They barely have the means to sustain their very  life.  As Bourgois articulated, “Children… are the ultimate casualties when households disintegrate” (Bourgois, 2003, p. 265).

Some impressionable youngsters, as Bourgois discovered, tend to be oblivious of the untold harm and immense transformation that their life can possibly undergo by living on the fringes of societal decay – and being exposed to crack dealing.  Bourgois illustrates this very well through conversational vignettes shared in his book, which he picked up while living among the  young male Puerto Rican immigrants in New York.

During close encounters with kids living dangerously close to crackdealers, the author himself declares to the first youngster he encounters from the low-status, underprivileged families of East Harlem that the boy will soon be “sucked into a life of drug dealing” (Bourgois, 2003, p. 266). The boy, however, appears resolute that he will not get into drugs, but his environment and life conditions soon draw him into the vortex of crack dealing, even if he sees his involvement in a detached manner at the start.

Partly because of his own enthusiasm to mingle with the adults engaged in the drug business, and partly because the very social structure he finds himself in renders him vulnerable to becoming a victim of substance abuse, Junior appears pre-destined to become involved in a life of drug dealing and usage. He plays a pivotal role in the story in that he represents other youths whose fates are decided for them, more as result of a synergy of factors, namley the social and environmental components.

Their poverty, and the consequent lack of opportunity to rise above their socio-economic situation, not to mention the huge impact of the overall economic structuring of New York City where many have chosen to take up residence, have made them succumb to the drug dealing culture or way of living that has become so entrenched. In effect, even if social inequalities play a decisive role in their fates, these undereducated, marginalized youngsters unwittingly become their own driving forces that seal their own destinies and administer their own eventual ruin.

Chapter 7 of Philippe Bourgois’ book also makes passing mention of the brutal rites of passage that girls in New York’s inner city drug dealing neighborhood must contend with (Bourgois, 2003, p. 267).  The case of gang rape mentioned in the chapter highlights not just the pitfalls that await the young female population growing up in poor communities where drug dealing is rampant, but also the solidarity that families extend in protective stance towards their kin.  One also senses the futility of efforts to find police help when a crisis strikes underprivileged families dwelling in inner city areas engulfed by the crack trade.

Philippe Bourgois comes across as a very credible source, having lived and interacted with the people who have engaged in drug dealing, and have experienced drug-related violence as well as hardships in striving to find their place in mainstream society. In chapter 7 of In Search of Respect, Selling Crack in El Barrio, Philippe Bourgois was able to convincingly show how the very culture spawned by the crack trade can change or transform in a major way  not just people’s present aspirations, but also their future social conditions in life.

In Search of Respect: Selling Crack in El Barrio by Philippe Bourgois – A Reaction Paper. (2016, Sep 26). Retrieved from https://studymoose.com/in-search-of-respect-selling-crack-in-el-barrio-by-philippe-bourgois-a-reaction-paper-essay 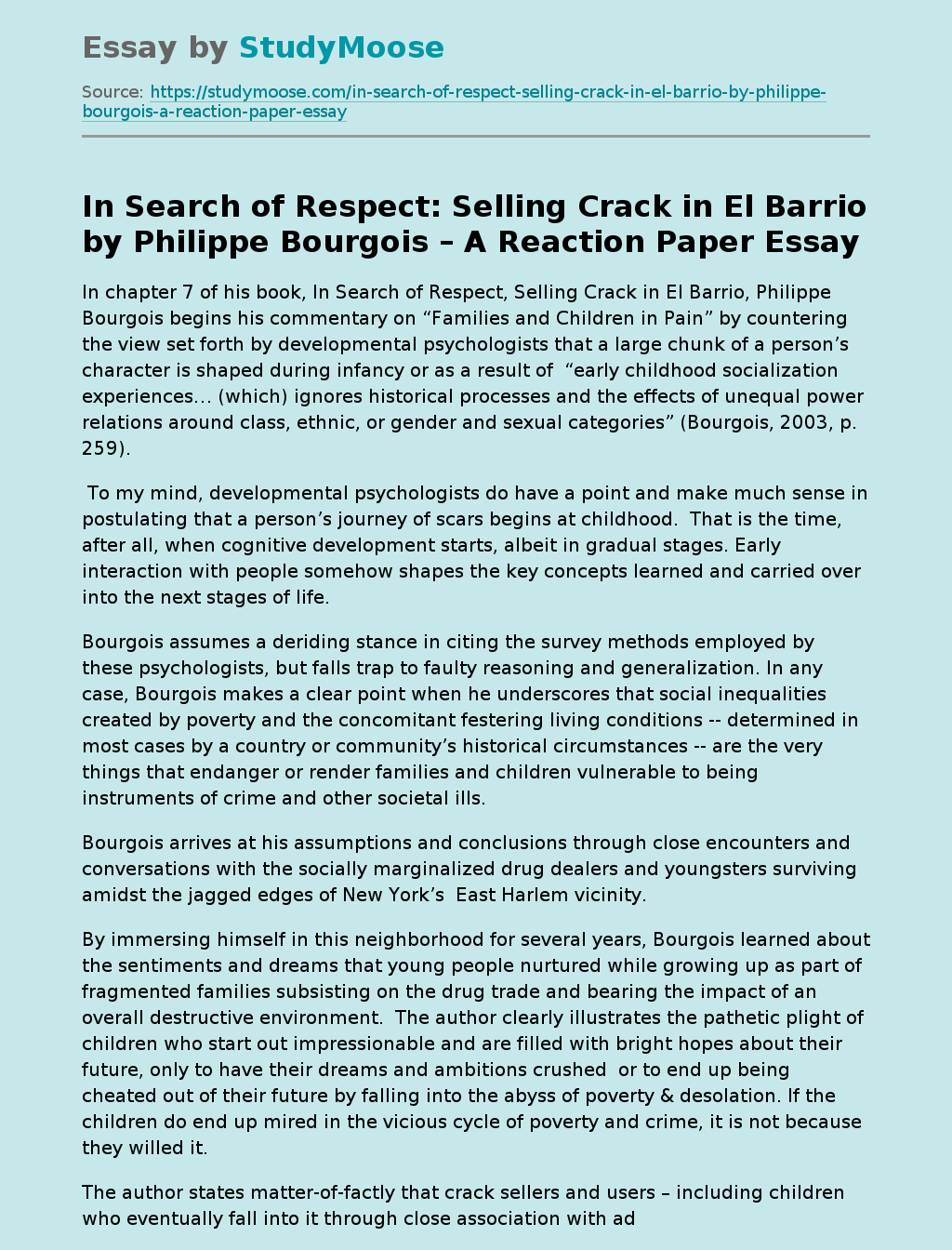