Auschwitz is not just an ordinary place. More than a specific geographical point, it is now beholden by the world as a memory – a regrettable memory that is – which remembers some six million Jews gassed to death from 1939 to the early months of 1940’s. It is well indeed a memory – a baffling memory that is – which until now is clueless as to how the world failed to stop a catastrophe that would end up as an epic type of human suffering and destruction unparalleled in human history.

Don't use plagiarized sources. Get your custom essay on
“ Viktor Frankl’s Man’s Search for Meaning and Primo Levi’s Surviving in Auschwitz ”
Get custom paper
NEW! smart matching with writer

Thus, many of those who actually survived Auschwitz offer to share this memory and so give the world a glimpse of the nightmare many of them had to wrestle with for the rest of their lives. Now, there are a number of Auschwitz-recollections that serve to remind the world that Auschwitz must never happen again. Viktor Frankl’s Man’s Search for Meaning and Primo Levi’s Surviving in Auschwitz are pioneering examples of the volumes of Auschwitz-literature written as “a way to remember” the tragedy (Angier, 2002, p.

Proficient in: Mans Search For Meaning

Viktor Frankl’s Man’s Search for Meaning. Man’s Search for Meaning looks more like Frankl’s random recollections of his Auschwitz experiences than a systematic presentation of his thoughts about it. It must be seen as a two-thronged material though – it is on the one hand a dramatic reconstruction of the painful experiences of the people Frankl got to mingle with in the concentration camps, and it is on the other hand a telling introduction to his theory about the a psychology of human existence he called Logotherapy.

In this book, Frankl’s recalls as many diverse experiences as he could.

In fact, his reasoned purpose for presenting many unique experiences as possible stems from his desire to draw eventual conclusions to support his psychological theory. The work itself is dramatic and picturesque. It recounted immortalized conversation by people locked in forced labor, cruel punishments and daily starvation. Frankl also recalls how he and his comrades would collectively dream of liberation, and how many of them actually took little pleasures like smoking cigarettes, taking a cup of soup, having a few hours of sleep, and being able to think of their wives and children, as concrete ways to alleviate their plighted existence.

In many ways, Man’s Search for Meaning is a book that takes into heavy account personal coping ways that enable one to survive a grueling existence. Primo Levi’s Surviving in Auschwitz Printed originally as If this is a Man in Italian and translated into English as Surviving in Auschwitz, Primo Levi says that this work is his contribution to make the world understand Auschwitz as a “metaphor…for man’s inhumanity to man” (Camon, 1989, p. 19). In the book, Levi, like Frankl, recounts his and his’ peoples’ suffering under severe circumstances.

His chief concerns appeared to center in on the health and living conditions of the people (Levi, de Benedetti, 2006, pp. 10-11). In many of his accounts, Levi would raise the issue about people’s compromised health as a consequence of having to work under the biting cold and left with insufficient food rations. Therein too, he narrated the different traumas that prisoners were subjected to – from the trauma of being forced to do manual labor under inhumane conditions, to the trauma of being alienated from family and fatherland.

In this book, Levi believed that their conditions afforded them to discover ways for self-survival. But he maintained that the only ones who survived did not necessarily have to care for others. Survival of the fittest seemed to be the game in concentration the camp, Levi noticed (Camon, 1989, p. 20). In order to survive, Levi noted that the prisoners themselves engaged in a fight for inner hierarchy and economics (Camon, 1989, p. 21) marked by conditions where there is little solidarity, and most comrades treated one another as competitors in their quest to survive.

A Comparative Reflection Both books actually dwelt on the overarching theme of survival. In fact, both of them are recollections based on the stories that made (or unmade, for those who did not make it) them survive the horrors of being shipped to a concentration camp. But while both works are glued by the same theme, their type of approaches and manner of presentation are very different. Key to Frankl’s book is to notice how Frankl seemed to have known (or predicted if it is permitted to be called) who among his comrades would survive the Holocaust or not.

Frankl called it the “fulfilling meaning of the moment” (Frankl, 1997, p. 51). His book maintained that those who chose to meet any sort of tragedy – whatever its intensity – with a choice to put meaning in it, would never run out of the reason to live. As Frankl would himself argue: “to see beyond the misery of the situation to the potential of discovering a meaning in it, and thus turn an apparently meaningless suffering into a genuine human achievement” (Frankl, 1997, p. 1) is precisely what made a prisoner of Auschwitz survive. Surviving in Auschwitz meanwhile offers the same theme of survival in a less optimistic tone. If Frankl was interested in showing the power that lies in the human spirit, Levi was keen in presenting the ugly side of the human drive to survive. Levi’s more narrative approach to his Holocaust experiences enabled him to present the problems not only with the Germans, but also with the Jews more objectively. Both works also manifest differences in style.

Frankl’s work is very graphic. He attempted to approximate the intensity of one’s agony when he wrote some of the stories. At the very least, Man’s Search for Meaning is emotionally provocative. Meanwhile, Surviving in Auschwitz figures in a very narrative and often less-emotionally charged recollection of concentration camps events. Primo Levi intended it to be that way; he said, he did not want to be a judge of history by painting his works as though he tried to condemn Germany all together (Camon, 1989, p. 70). 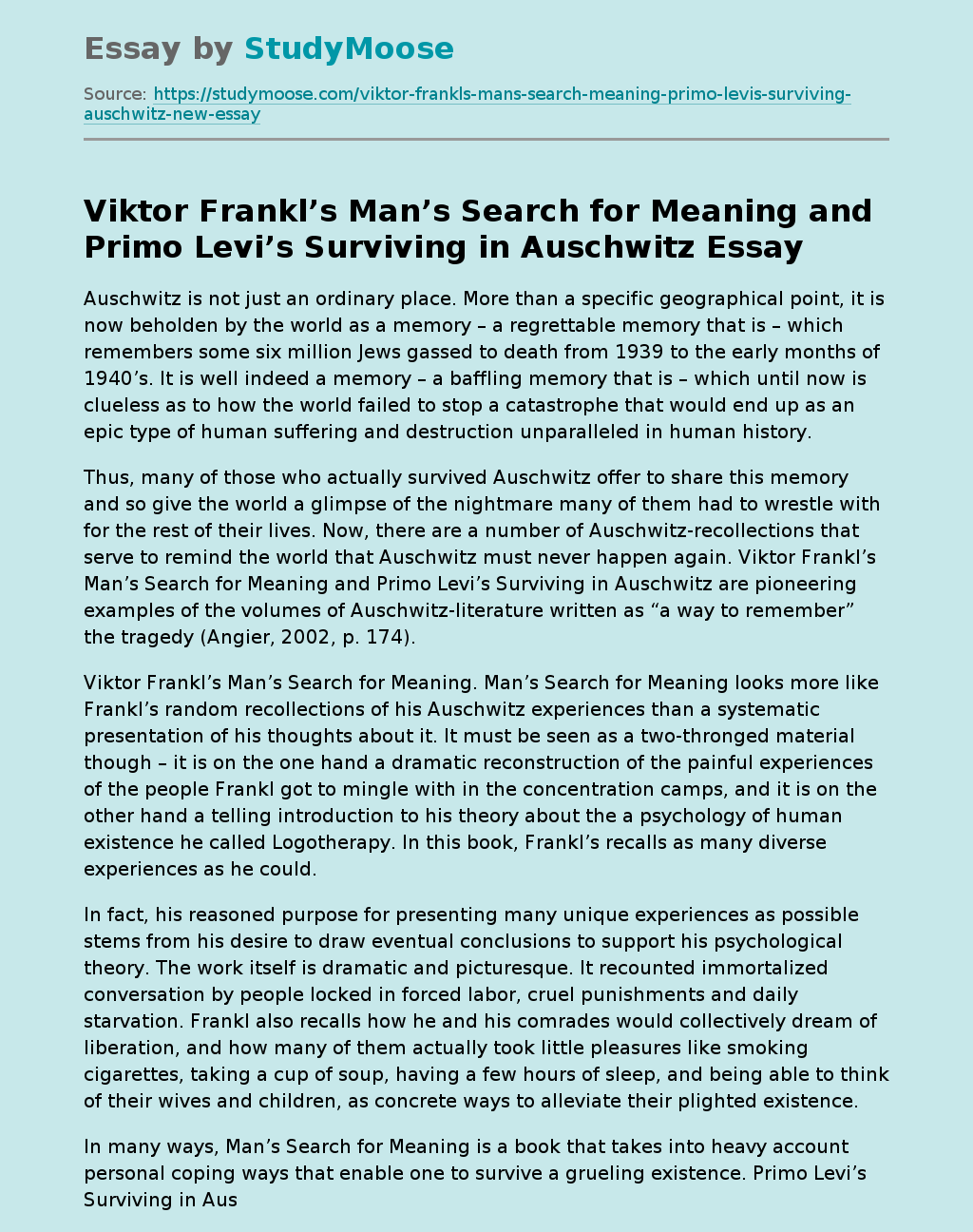