Globalization is a necessary evil that allows business to make huge profits and third-world countries to begin creating a free market economy. While it seems that globalization may be a solution to the problem of poverty and starvation for some people, it may also contribute to issues such as child labor, discrimination, exploitation and health and safety issues for people working in developing countries. Since U.S. laws do not apply to American companies operating in foreign countries, these companies have an ethical responsibility to create codes of conduct to govern the way they treat people and conduct business overseas.

Don't use plagiarized sources. Get your custom essay on
“ Globalization of Levi Strauss ”
Get custom paper
NEW! smart matching with writer

Levi Strauss & Co. has been a leader in corporate and social responsibility; the first multinational company to create a code of conduct for their international facilities, business partners and suppliers (History, 2009).

Levi Strauss & Co. was founded in 1853, by a Levi Strauss, an immigrant from Bavaria and Jacob Davis, a tailor from Reno, Nevada. The two men patented the riveted-pocket work pants and began the multi-million dollar company that it is today.

LS&Co. was developed on Levi Strauss’s high morals and values: empathy, originality, integrity and courage, and continues to operate under these core values today (History, 2009). The company is well known for its corporate social responsibility and has been recognized and rewarded for its ethical conduct.

In 1965, as demands for the clothing began to grow world-wide, LS&Co. established Levi Strauss International and Levi Strauss Far East, allowing them to manufacture and sell products in Europe and Asia.

In 1971, the company opened a facility in Japan, which became the company’s first official entry into Asia. Today, the company employs over 11,000 people around the world, with 4,700 employees in the Americas, 4,400 in Europe and 2,300 in Asia Pacific (History, 2009). While globalization increased profits for the company, ethical issues also began to become more evident. In order to uphold the values that the company was founded on, the company would have to create ethical guidelines for international operations.

In 1991, Levi Strauss & Co. was the first multi-national company to develop a code of ethics for its international business partners and suppliers. The Levi Strauss & Co. Global Sourcing Guidelines were designed to ensure that all LS&Co. facilities worldwide, as well as suppliers and business partners, conducted business in ethically and socially responsible ways (Solomon, 1996). Requiring their business partners and suppliers to follow the company code of conduct protected the employees in developing countries who could easily be exploited, and it protected the company’s reputation, which would also contribute to their success.

This code of conduct was developed in order to avoid or eliminate some of the most common ethical dilemmas associated with globalization. In order to maintain contracts with LS&Co., suppliers agreed to provide workers with fair wages, a safe and healthy working environment and abide by the laws and regulations that govern the country and industry. Suppliers would also prohibit the use of child or forced labor, discrimination and forms of inhumane disciplinary practices (Solomon, 1996).

While globalization helps developing countries to build free market economies, it also presents many ethical dilemmas, as huge companies profit from the desperate need for work in poor countries (Dickey, 2002). Since ethical issues can be viewed differently by different cultures, developing global business ethics can be difficult. For example, many western cultures may view child labor as a necessary, and accepted, source of income for many families, but many Americans and other western cultures see child labor as abuse. When Levi Strauss & Co. learned that two of its suppliers were using child labor in Bangladesh, they had a moral dilemma.

The families of the working children relied heavily on their incomes, so firing them might create a major hardship on the children and their families, or even force the children to look for more inhumane sources of income, such as prostitution or begging (Solomon, 1996). LS&Co. looked for more creative ways to solve the problem, and came up with a solution that would benefit everyone. Their suppliers agreed to continue paying the children under age 14 while they attended school, and LS&Co. paid for tuition, books and uniforms, then when the children turned 14, they could be rehired by the company (Solomon, 1996). This solution created no financial hardship for the children and families who would otherwise lose their income, and allowed them to receive an education, as children should.

Levi Strauss & Co. has also faced other ethical issues overseas, and taken a responsible approach to resolving the problem. In 1998, for example, they decided to close the factories in Belgium, but worried that the loss of over 1,000 jobs might devastate the Belgian economy. In order to avoid financial hardship for the community, and stimulate employment, LS&Co. decided to pay each employee a farewell bonus of $13,201, and an additional $4,950 to all employees who found employment within four months. They also agreed to pay employees who decided to receive training instead of work $330 per month for six months, and employees who did not work received $90 per month for three years. Considering the average annual salary for Belgian workers was between $2,000 and $3,000, this bonus was more than fair to the employees who had been laid off.

Levi Strauss & Co. continued to contribute to the Belgian economy to make sure that the market would remain stable and keep the unemployed from going into poverty (Bennett, 2008). That year, they contributed $78,560 to programs that encouraged education, training, workforce development, small businesses, life skills training and financial literacy to the Belgian economy, in the belief that “economic development extends beyond the workplace…and in order for an economy to thrive, the community must be able to support it” (Bennett, 2008, p.4).

Levi Strauss & Co. has been a leader in corporate social responsibility and one of the first multi-national companies to develop a code of conduct for global business ethics. The company continues to demonstrate their values of empathy, originality, integrity and courage while operating in all countries, and requires the same of their suppliers and business partners. Their creative solutions to common ethical dilemmas in developing countries, such as child labor and layoffs, and their continued efforts to contribute to the economies of the developing countries they operate in, sets a powerful example for multinational corporations to follow.

Even though globalization can provide an income for people who might otherwise starve to death, it can also lead to ethical and moral problems such as child labor, low wages and hazardous working conditions. While it is not illegal, or unethical, for companies to operate overseas, they do have an ethical responsibility to deal with ethical dilemmas in a responsible and socially acceptable manner. 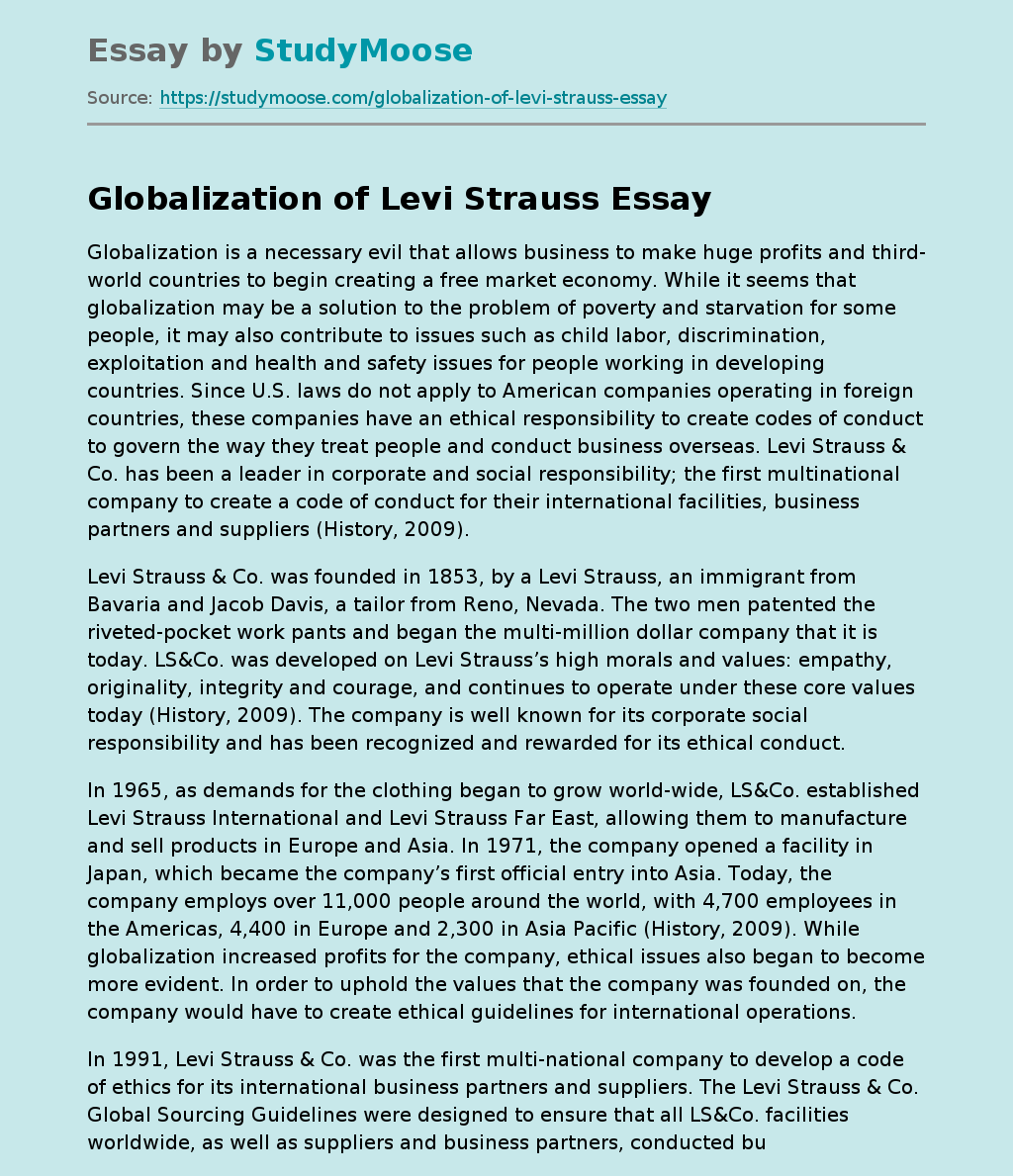