Financial globalization is not a new term; it has existed since along time as there were capital flows. These capital flows were mainly in the form of long term bonds. As most of the countries were backed by the gold as their currencies the standards were even set according to the gold rates. After the First World War the first global crisis came into being which led to the great depression and the Second World War. After the Second World War the countries restricted trade and looked upon their monetary policies.

Don't use plagiarized sources. Get your custom essay on
“ Financial Globalization ”
Get custom paper
NEW! smart matching with writer

In 1970s this came to an end and another wave of globalization ran across the world in the form of investment in oil. The financial globalization connects the different countries financially and in the financial integration of the developing countries. The financial system has been evolving since a long time for the better performance of the economy. There came a time when financial instruments were easily being divided into its further components.

Risk could be sold or even bought. There is a cycle through which there is a recession period and a boom.

After a very long period of boom there are certain reasons which lead into a recession period. Financial crisis can be caused due to several reasons like currency crisis, bank crisis and etc. These crises occur when an asset or something loses its value to a very less amount. There have been recession periods in the past even but the most recent one occurred in 2007. This was also called the great recession.

It collapsed very large institutions. Many banks even closed down and several companies had to face severe consequences due to these factors. Now the question arises what caused recession?

What were the factors that contribute towards recession? The major reason behind all this in 2007 was the real estate and subprime issues. The investors in real estate were encouraged by the bank and other loan providing authorities to take up on loans on a relatively easy term. These easy terms meant on low interest rate at a reasonable initial payment and etc. Due to these things the prices of the houses started to increase but when the inflation started to raise the prices of property started to decline and hence many of the loan schemes became a loss making for both the provider and the user.

The user would lose all the initial payments made while the provider will have to bear the loss due to the inflation. The subprime lenders were moving towards bankruptcy. The main reason for the economic problems today is the expansion of global credit, deregulation and restricting the alternatives of the policies. There could be many reasons which might have led to the crisis in 2007 but the main reasons among them were the value of dollar in international market with respect to the trading of oil, the debt cycle due to the housing schemes and the economic inequality trends.

The growth in the inequality trends meant that the gap between the highly paid people and the low paid people kept on increasing in terms of their salaries. Due to this, the consumption was affected as purchasing power would decrease due to low income. To solve this problem plastic money was bought in, plastic money means the use of credit cards, this allowed people to buy things even if they didn’t have cash. The use of plastic money increased the GDP of US and hence its use became more and more common. The concentration of wealth has had a great deal of affect on the political activities even.

Lot of people had so much money which they didn’t even know where to spend. The number of donors therefore increased in the system as there people in need of money on the other end (Allan, 2010). The private sector debt has brought a great deal of increase in the crisis. The credit card debt was a little concern over the concern of mortgage debts. Today the crisis is faced due to three main reasons. The change in baking policies, the buying of houses even with a low income and the policies on debts which allowed people to borrow money to buy their houses were among those reasons.

The dollar has been the currency in which trading was done. US a few decades back was a creditor and now has become a debtor and that too the biggest one. The depreciation of dollar was due to the trade being taken place in other currency like Iran started trading oil in its local currency and other currencies like Euro and Pounds appreciated causing the value of dollar to depreciate in the international market which even led to the crisis. The problems started to surface when the ‘well’ of credit started to dry up. Bringing credit into the economy cuts down the flow of money and it decreases the growth of the economy.

The use of credit is not a bad thing as it promotes growth and jobs, but when they are used wisely. Financial globalization started in late 1980s which was assumed to bring in more growth to a country especially the developing countries. It is largely believed that financial globalization has led to financial crisis but there are very less evidence to support this finding. FDI has become an alternate equity way to the debt financing ways. They are considered to be more stable and are less prone to risk. They bring in more benefits like transfer of managerial and technological expertise.

Even the supporters of financial globalization believe that risk is involved in it. Financial globalization allows the country borrow in bad times and lend money when the other countries need in good times. Thus it shares the international risks. When country is not financially global it has to look upon the matters regarding to the domestic investors only but when it is financially global it has to take into consideration the foreign investors even which requires a lot of time to solve problems regarding the crisis situations of a country. Even the imperfection of international financial market can lead to crisis.

Due to the imperfection fundamentals can also be deteriorated. Even those countries with sound fundamentals can be affected by the importance of external factors in the international market. For example the interest rates, these external factors are a way to judge a country’s capital flows. The shock transmitted through different countries is another way through which financial globalization is affected. For example, if two countries are competing in the same market and if the value of one country’s currency depreciates it will disturb the other country’s competitive advantages.

Thus both the countries will have an adverse effect on their currency due to the depreciation of one country’s currency. Another form of shock can be through the information. The investors rely on the market; they see and then speculate according to the position of the market the future of their business. Therefore there can be problems for the economy of a country. There are 4 main agents in the financial globalization, government, borrowers, investors and financial institution. The government restricts the domestic financial sector and capital flows and gives preference to the foreign trade.

The opening of foreign companies has increased the investment of foreign countries in a country. To smooth their consumptions the countries have started borrowing from abroad which makes it easy to finance activities as the other countries might be interested in investing in other countries than itself due to several reasons like low risk and higher rate of return. This has made easy for the company and individuals to invest abroad through shares in the companies, providing loans and etc. Financial institutions like International Monetary Fund (IMF) provide a mix of services which are available in different countries all over the world.

One of the benefits of financial globalization is the development of financial sector. It has increased the amount of capital present for investment. These advantages come with different sorts of disadvantages even mentioned above. There are different ways through which a government can minimize the risk of financial globalization and maximize its benefits. The government should have proper policies regarding investment in foreign countries, should control capital flows. The transactions which are based on foreign country should be backed institutions which can help in the times of crisis.

There should be proper ways to manage the risk and returns. The rules and regulations made should be properly disclosed to enable proper dealings. Managing risk from the beginning might be prevention to the country from several crises and then when crisis do occur they can help the country to solve the problem easily and come out of it smoothly. If the country loses its confidences there are chances of the currency to depreciate therefore proper measure should be taken to support the crisis. This can also happen when there is a change in the foreign currency, as well as the country’s own currency.

Thus it can be concluded that the financial crisis of 2007 due to the heavy mortgages and easy borrowings might have led many people to become wealthy but those who were poor became poorer. The effect of the crisis which mainly started in US had its effects all over the world as many of the countries are interlinked with US and hence change in the value of the dollar would affect the other country even. Other its effects on the currency the financial crisis have led to bankruptcy and bailout of many banks and companies. Some of them which were lucky enough were merged with other companies to save the bad economic conditions of the country.

Many people had to give back their houses to the government, banks or any other lender which caused a lot of problem to the lenders as well as the owners. This period was known as the recession period where many of the employees lost their jobs due to the shutdown of many organizations all over the world. Even though it has been few years since this recession, its effects can still be visible now. Many places in US still have high rate of unemployment. Thus the financial crisis doesn’t have a good effect on financial globalization.

One could say they are interlinked with each other, financial crisis can put a stop to financial globalization and excessive financial globalization can even cause financial crisis. Therefore it is very important to look into matters when investing in foreign companies, those policies which might seem to be more profitable for the short term should be avoided and making decisions on just speculation should not be the only way, there should be a calculation done to measure the amount of the risk a country could face. Though these crises are short lived but sometimes they can leave its effects for a very long period of time. 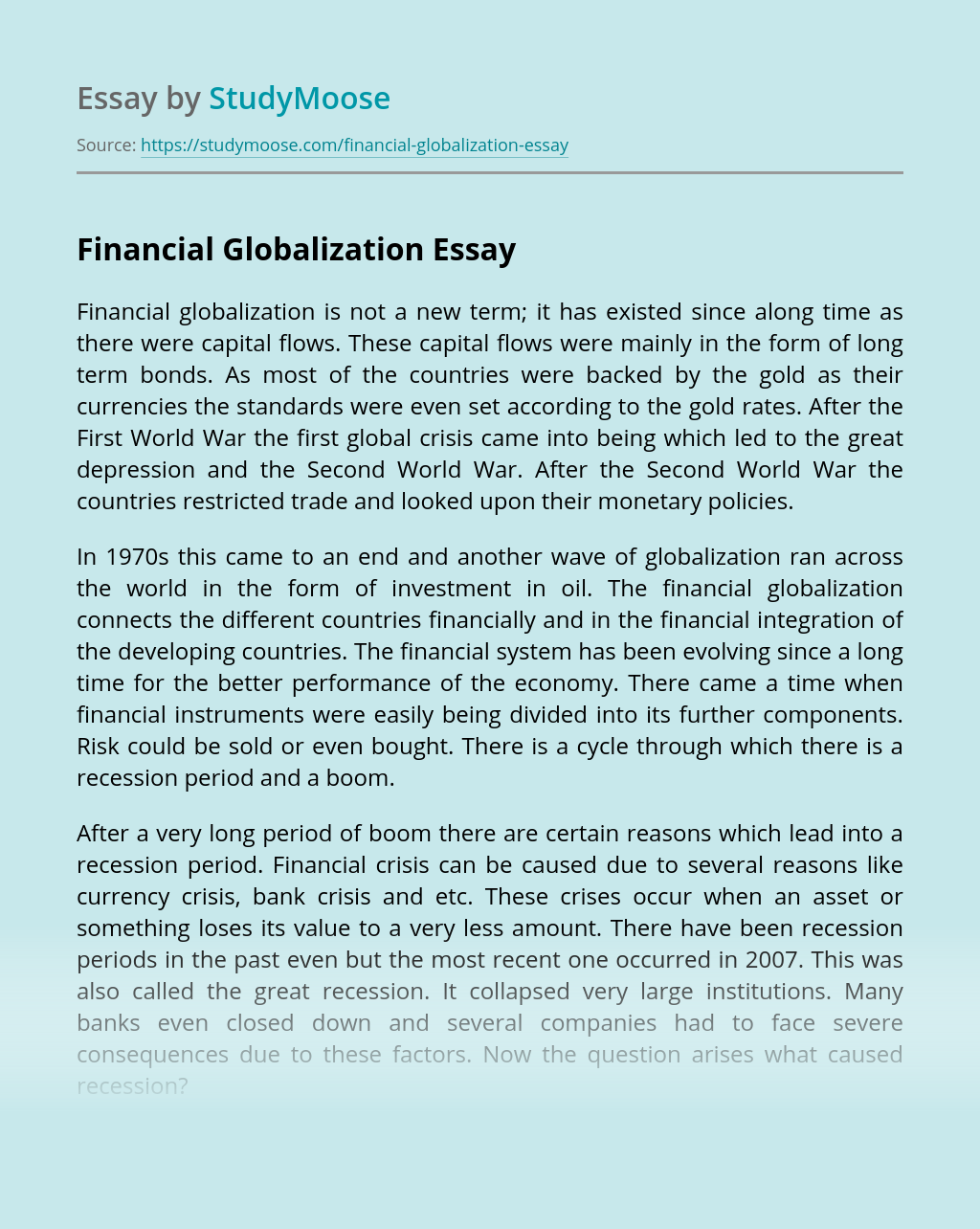