Importance of Mother Tongue in Education

A mother tongue is a language a person or child speaks at home and has started speaking from an early age; it also explained as a person’s native language which also means a language learned from birth. Other terms are as follows: a first language, dominant language, home language, and native tongue (Richard N. 2018). The mother tongue generally means the speaker’s main and home language and does not only mean the language one learns from his or her mother.

Don't use plagiarized sources. Get your custom essay on
“ Importance of Mother Tongue in Education ”
Get custom paper
NEW! smart matching with writer

For example, if a language school advertises that all its teachers are native speakers of English, we would most likely complain if we later learned that although the teachers do have some vague childhood memories of the time when they talked to their mothers in English, they, however, grew up in some non-English speaking country and are fluent in a second language only. Similarly, in translation theory, the claim that one should translate only into one’s mother tongue is in fact a claim that one should only translate into one’s first and dominant language.

It has been said that having a strong mother tongue foundation leads to learners having a much better understanding of the curriculum and a more positive attitude towards school, so it is better that children preserve their first language when they begin school in a different language. In this essay, this issue will be argued using hermeneutics and critical rationalism, and one best philosophy will be chosen.

Hermeneutics is concerned with problems that come up when dealing with human actions that is meaningful and the products of such actions, most importantly texts (Mantzavinos, C.

, (Winter 2016 Edition), Edward N). As a discipline of methodology, it proposes a toolbox for professionally treating problems of the understanding of human actions, texts, and other meaningful material. Hermeneutics comes back from a long tradition as it addresses a set of problems that have been predominant in human life, and have continually and consistently called for consideration: interpretation is a global activity, unfolding whenever humans aspire to grasp whatever interpretant they believe it is important. Due to this long history, it is normal that both its problems and the tools designed to help solve them have shifted much over time, sideways with the discipline of hermeneutics itself (Mantzavinos, C., (Winter 2016 Edition), Edward N).

Hermeneutics so far emphasizes the importance of listening and observing, if a child is mainly taught in a different language and not with his or her mother tongue it will be difficult for the child to listen and observe because he or she is using a strange language thus the lack of understanding. The importance of dialogue or communication affirmed by hermeneutics arrives at an understanding of any problem ( Philip Higgs & Jane Smith), if one understands language he or she can be able to communicate and find a solution to a problem. Just like any other philosophy, hermeneutics also has its own advantages and disadvantages. Advantages of hermeneutics are as follows: it can help create meaning in everything, help discover one’s own hidden artistic abilities, it resists scientific arrogance and domination, it helps us in understanding each other and to be more tolerant of each other. The disadvantages are as follows: hermeneutics cannot help us define problems, overcome injustice, it cannot help us be decisive and act, and it also cannot help us be more logical (Phillip Higgs & Jane Smith).
Critical rationalism is a philosophical approach that was developed by Karl Popper in the mid-20th century. It is based on the idea that is naturalistic and the society has developed through a process of problem-solving using experiments and error. The natural and social sciences have been born out of such solving problems and developed by exposing potential theories to vital testing and criticism. Falsified theories are rejected. According to R J Ormerod, Popper calls for a society that encourages such problem solving, a society that allows courageous theorizing followed by freed criticism, a society in which there is an honest possibility of change in the light of criticism: an open society. Critical rationalism encourages humans to question what they are told and that they should examine their own ideas carefully- in this case, parents should not believe everything they are told (like when a child knows English, it means that he or she is bright whereas English is just language just like any other language) they should examine their own ideas.

The question that is asked in critical rationalism is “are we sure we are right?”. Parents also need to ask themselves that question to make sure that they are making the right decision or not and critical rationalism will help them solve their problems by thinking clearly and discuss everything openly. It also focuses on avoiding falsity, it advices us that we should be more critical of most of what most media say (Philip Higgs & Jane Smith). Some media is owned by powerful and rich people and they can say whatever they want to say and make us believe it, they influence us into believing everything that they say and we will be left with no choice of thinking for ourselves.

Like it has been stated in the introduction that the best approach to this issue will be chosen, so the best approach is the critical rationalism. Critical rationalism encourages people to think critically for themselves, so it can make it easier for parents when making decisions for their children’s education because education is very important in children’s lives. It will also encourage parents to not believe everything that the media say but rather examine their options more carefully and clearly. Even though critical rationalism may fail in helping on making quick decisions, it is for the better because it helps solve problems and good things take time just a saying that says, “good things come to those who wait”. Critical theory won’t be able to help parents to deal with dishonest people but they should be more tolerant and understanding towards them and think critically by themselves. In this case, it advises them to be very careful about such things in life they want the best for their children.

Importance of Mother Tongue in Education. (2020, Sep 08). Retrieved from https://studymoose.com/importance-of-mother-tongue-in-education-essay 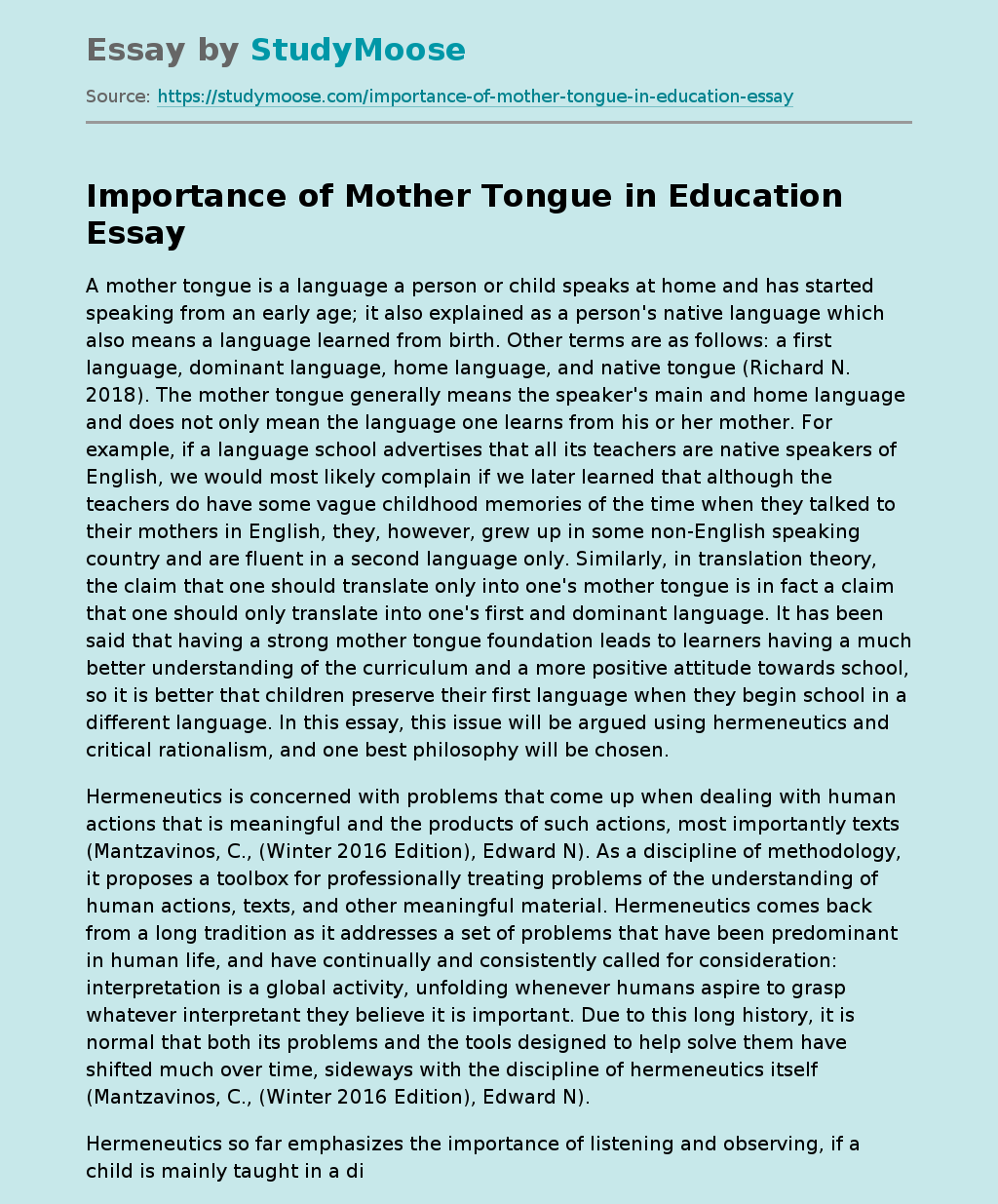