Importance of Advertising in Social Media for Business

What is social media? It is websites and applications that enable users to create or share content or to participate in social networking (Drury, 2008, p. 274). To describe social media, it is the platform which facilitates the creation and sharing of information, data, ideas, and other forms of expression via virtual platform using the internet. The impact of social media has on our lives is tremendous, not only for connectivity but mainly in terms of upcoming businesses. Social media and business go hand in hand in many aspects, effect of the former influence the results of the latter.

Don't use plagiarized sources. Get your custom essay on
“ Importance of Advertising in Social Media for Business ”
Get custom paper
NEW! smart matching with writer

Social media has a huge impact on businesses through proper advertising, reaching out to a specific category of people and the marketing data collected from the past.

According to Facebook business (2016) “Today, three million businesses actively advertise on Facebook.” This number shows how advertisements in social media are important for business. With these advertisements, one is able to reach your target audience faster and finally get a better return on investments. In addition, advertisements allow one to constantly keep track of how well or how bad their advertisement is performing. Target audiences are always moving around the popular social networks and they are engaging with their favourite brands and connecting with them on many distinct grounds.

By providing the brand into advertisements, creator not only generate more business but also connects with customers in better way and serves them on a higher level. On the other hand, advertisements are risky too. For an example, according to (Hackley, C. & Hackley, R., 2018) Dove was intended to convey that Dove Body Wash is for every woman but people interpreted the advertisement in the wrong way. In the advertisement, the transition of the black lady to the white lady was interpreted as racism. Hence, if done in a concise, attractive, and forthright manner, then advertisements can benefit businesses. Otherwise, it would create social issues among people.

Expanding the business is simply about reaching out to as many people as possible, and nowadays, it has become even easier to reach out to more people with the use of social media. “Facebook is a dominant social-networking site with an audience of approximately 160 million US visitors each month. It accounts for 90 percent of all time spent on social-networking site” (Lipsman, et al., 2012). This number shows how many people use the social media application Facebook regularly. For an instance, a primary goal of an active blogger is to reach the certain number of people with alluring content that readers may share it with man other people on different platforms and that reachability increases 10 times more in many cases. Thus, one can suddenly reaching out to a huge audience that may like and share the content, follow the brand and ultimately becomes a customer. By using social media, one increases their marketing techniques in more than one way. You do not reach out to just one type of person, but connect to a broader range of people. On the other side, social media marketing generates negative users. One of the problems with social media is that many people, in fact, most of the world’s population use it, even the negative and malicious ones. Spammers, scammers, trolls and all other sorts of malicious individuals are all out to do harm to your online reputation of a brand. One may find certain negative feedbacks, of which some are genuine, but others are there just for hampering someone else’s reputation and it ultimately leads to a brand’s defamation. For example, some employees may also decide to have fake social media accounts just for the sake of disseminating information regarding the organization, which becomes hard to track these misleading negative comments in efforts of addressing them accordingly. Social media also has a way of reducing the manner in which employees interact with each other. At times, some employees may find themselves posting gross comments towards their colleagues thus deteriorating their relationship among other teammates and employees. Hence, if one knows about the type of people whom they wanted to target in their business then it becomes easier to reach more people who will actually buy services. However, one should not post anything unless they mean it otherwise, they gets the penalized.

Lastly, marketing data analysis with social media is an important factor for growing the business, where data is being used comprehensively, which is meta-data, it becomes easier to gain public data, as to which market suits for the business. It is absolutely possible to spike the business by using past data of a certain class of products, and the customers who opted to use it (Figure 1). That generally gives the business or brand on the social media to focus on their attention solely based on the past data and count on its success in future too. Although, this relatively easier technique is a short cut to success, the bitter truth is that with each passing day data is being privatized more and more, and being kept in a respective countries only, so the global market takes a hit. It is relatively simpler to reach out to your national market via these data, but as other countries want their regional companies to thrive, you may not get access to such data, which is its biggest shortcoming. Hence, as efficient it is to develop and expand one’s business in one’s country, it’s equally difficult to get a hold of the global market.

To conclude, the use of social media networking platform increasingly becoming the common factor among many businesses. It transformed the traditional marketing craze with its sustainable approaches. Thus, the need of social media marketing has given a versatile choice for every business. Social media has a big influence on businesses through advertising, reaching out to more people, and the marketing data analysis. By taking into consideration of all aspects, one can grow their business and can easily avoid hurdles.

Importance of Advertising in Social Media for Business. (2021, May 08). Retrieved from https://studymoose.com/importance-of-advertising-in-social-media-for-business-essay 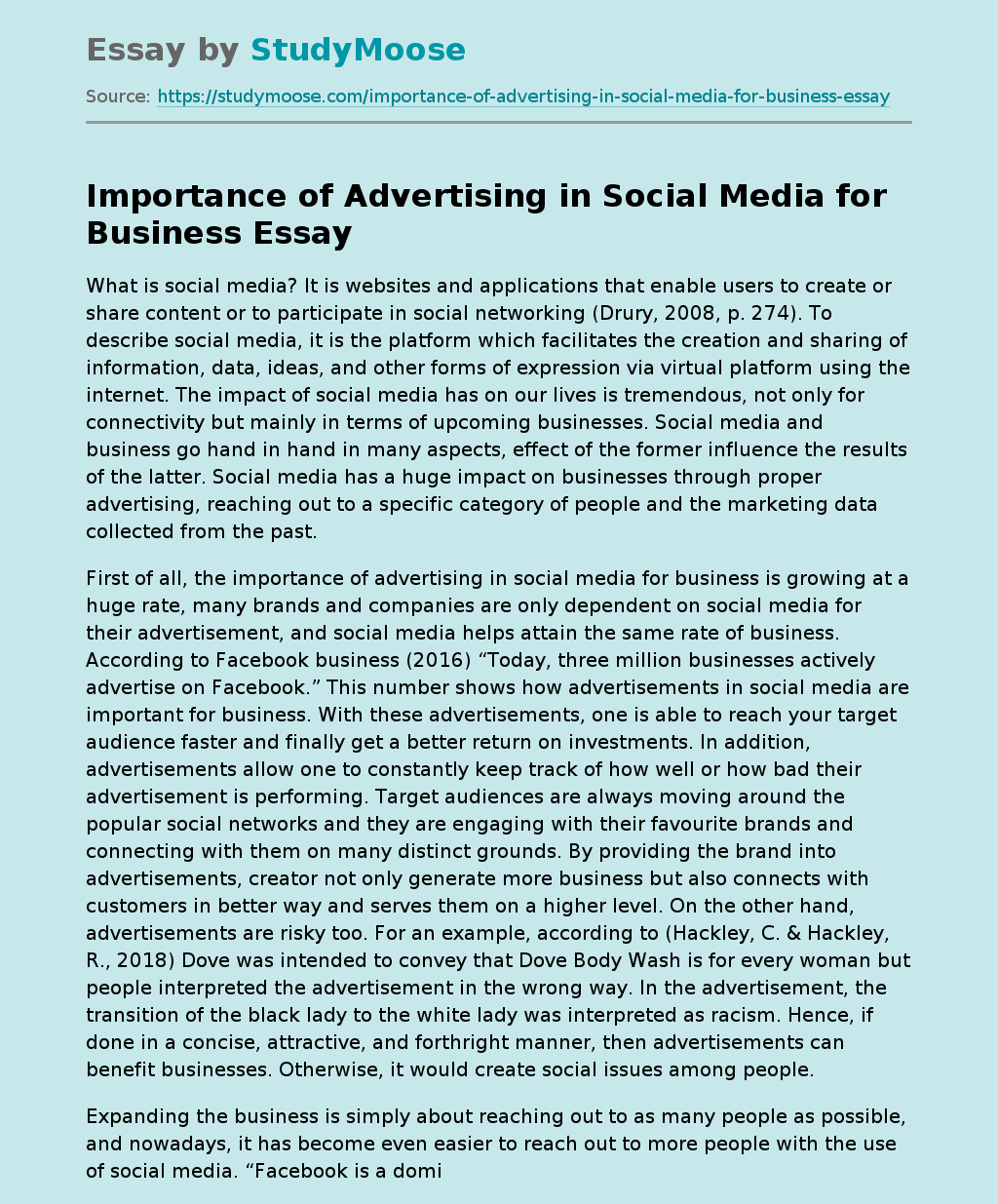