Tourism, as in other industries, has three interconnected aspects: environment, socio-cultural, and economic. Discuss the positive and negative impacts of tourism in relation to these areas. Tourism is defined as ‘the temporary movement of people to destinations beyond their normal place of work and residence; the activities undertaken while there; and the facilities created to meet their needs. ’ (Bliss & Pain 2005, p. 295) Now in our world tourism is the fastest growing industry. In 2002 more than 700million people travelled the world, and in 2010 the number will increased to 1billion.

Don't use plagiarized sources. Get your custom essay on
“ Impact of Tourism ”
Get custom paper
NEW! smart matching with writer

With international transport becoming more and more convenient and people’s income increasing people have more free time; more people will travel abroad. Maybe one day tourism will become to the largest industry in the world. This essay will look at the advantage and disadvantage of tourism on the environment, economy and socio-cultural. There are some positive effects of tourism in the environment. Firstly, the environmental infrastructure can increase though tourist money used by governments.

(Kreag 2001, p. 8) The government can use this money to protect and improve our environment.

They build places like national parks and natural reserves to protect animals and natural or man-made environment. Then local natural or man-made environments like historical buildings, mountains and reefs can be enhanced and protected to attract more tourists to come. In mountain gorillas of Africa, one lion can made $7000 tourist income every year and a group of elephant’s value are more than $600000. (Bliss & Pain 2005, p. 300) Most of the money is used to make the environment better and to construct the base infrastructure.

On the other hand because of travel, tourists waste a lot of energy, water, land and produce pollutions like air pollution, rubbish, waste and water pollution. (Kreag 2001, p. 8) Tourism can also destroy an environment. Over exploitation or over carrying capacity can destroy the natural environment or make the man-made environment unpleasant to live in. In Mediterranean, every summer more than 100 million tourists come, and as The United Nation’s forecast in 2025 the number of tourists to visit The Mediterranean probability could increase to 760 million. Baker 2000, p. 20)

Now in most countries near the coastline all of the coastlines have already been exploited and the Mediterranean now will become the dirtiest sea in our world. Another effect of tourism is when tourists travel to a places especially natural areas like beaches, mountains, the developer often build a lot of buildings. Some buildings like hotels, golf courses are need a huge land and water. (Goa under siege, 1999) Local people have not enough water to use, trees have been chopped, and beaches have been destroyed just because of tourist’s waste.

Some place like in Great Barrier Reef, the corals is degraded because of people go dive and boating, they destroy the corals everyday. Maybe in 10 years time we will never see the beautiful corals again. Tourism industry is the fastest growing industry in the world. It provides a lot of job opportunities for the local people to increase their income and standard of living. (Kreag 2001, p. 6) Some countries like Indonesia, Singapore most of local people are living for the tourism instead of traditional farming, they get more money than before and get a better life.

Tourism also can produce more tax revenues to government like from GST and tourists visas government can get more money. Government can use this money to construct the infrastructure or to support other industries, and then they can attract more tourists to come. For example in 2008 Beijing Olympic Games, Chinese government spend about $7 billion to buy new facilities and improve the public transport, make it more convenient to attract tourists come. In some countries tourism contributes to big part of the country’s economy, so if tourism increases very fast, the GDP also increases rapidly. Read about lifestyle of the poor and rich

Although, tourism has many beneficial impacts of economy, it also cause of some problem. Firstly, in many developing countries most of tourist accommodation, communications system and international transport, like hotels, vacation villages, and airlines be controlled by foreign investors. (Dana & Danielle & Carlton 2000, p. 1) So most of the money can not to got by local people and government. And in some foreign companies the local worker may be discriminated, they can not get the same salary and job as some foreign worker.

Secondly, when tourists come, the price of food, water, accommodation and transport in that place always increases very fast, it may become 2 or 3 times before. (Kreag 2001, p. 6) So many local people need to move out that place; because of they can not afford the things here. Thirdly, with the tourists coming some of the local people may become more and more rich and some other people still poor, it can increases the gap between the rich and the poor. Finally, if tourism makes up a big part of a country’s economy, it is not stable and may cause problems.

When the country have some natural or man-made disaster like typhoon, tsunami, earthquake or attacks of terrorism, tourists do not come any more, the country’s economy will fall and a lot of people will lose their job. (Dana & Danielle & Carlton 2000, p. 1)Like in Bali after the Bali bombings, for several years fewer tourists visited there and, the Bail’s economy declined. (Bliss & Pain 2005, p. 306) Tourists travelling from one place to another can improve understanding between cultures. (Kreag 2001, p. ) This is good for different cultural to communication and make our world become pluralist. Tourists can think about the difference between their own values and lifestyle. Maybe they can lean something useful from other cultures.

Traditional culture practices or beliefs can be strengthened, and some of the cultures can be protected, because of tourists want to see it and to lean. For example, the Mayan religion indigenous people is trying to find a new way to revive and research their ancient skills like crafts, to attracted the tourists. Theobalt 2004, p. 88) And tourists also comes here because of they interested in it, and want to lean how to make the crafts. Not only tourists can learn things from the local cultural. (Kreag 2001, p. 9) When tourists come in the local people also need to learn a lot of things from the foreigner. In some developing or underdeveloped countries the local people can get more opportunity to be educated because of the tourism. Like other industry, tourism has two sides; it can improve the cultural understanding, but it also makes some problems.

When tourists come, they do some bad activities, sometimes they drink too much, gamble, prostitution, these things are all not good and against to the traditional cultural. (The impact of tourism VI, 2003) Many young people to have a morden style instead of traditional life. Thailand is a very traditional Buddhist country, now because of tourism; the prostitution industry in Thailand is become very famous in south-east Asia. Some young people go to night club to find excitement or joining in the sex industry just because this can make money easier.

This can make a cultural lose itself. Another effect is many traditional cultures have been changed, because the tourists want to see them. (Mann 2001, p. 13) The cultural become to commercialize, it is not good ideal for people protection the local cultural. In Goa, India there is a traditional festival but now it become a big business show, there are many multinational corporations like BMW and marketing mix of Coca Cola in this show. (Goa under siege, 1999) And the local market there, are owned by a foreigners and sold to tourist.

Even though tourism industry has many negative impacts but it still growing very fast, and it will grow faster and stronger. The government needs to take some action, like to encourage people to travel as eco-tourist rather than normal tourism; to educate tourists how to protect the environment and respect local cultural; to support local business, improve people’s standard of living and to decrease the gap between the rich and the poor. If we can do all of these things, the tourism can become a perfect industry. 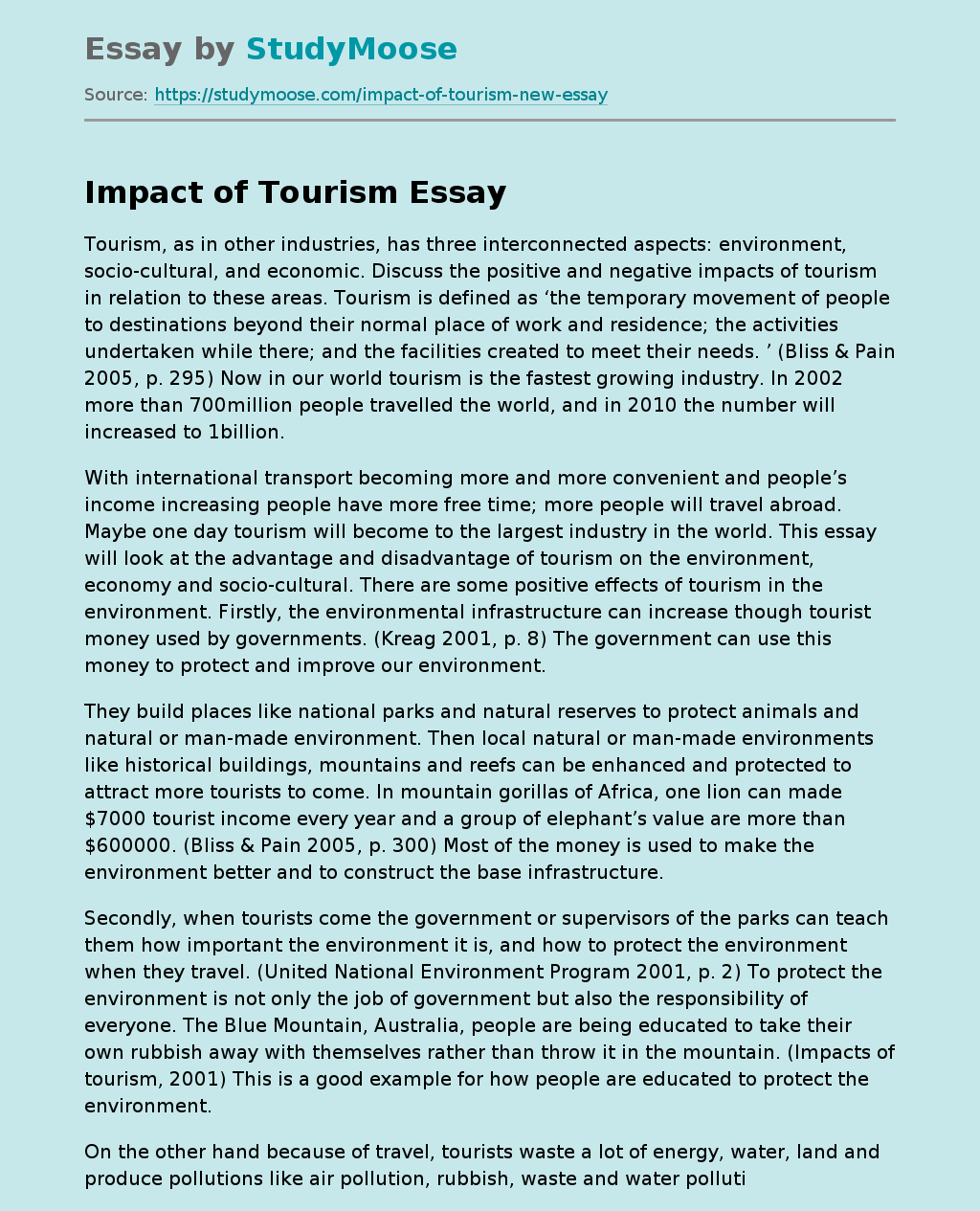