Impact of Locus of Control on Achievements In Life

Don’t waste time
Get a verified expert to help you with Impact of Locus of Control on Achievements In Life
Hire verified expert
$35.80 for a 2-page paper

For example, college students with internal locus of control will belief that their grades are achieved through their own abilities and efforts, but those with strong external locus will belief that their grades results from good or bad luck or the professor designs bad tests or grades capriciously, hence they have less expectations that their own efforts can result in success and are not likely to work hard for good grades (Dyer, 1993). Locus of control and college students Because of locating their control outside themselves, those students with external locus control feel that they have less control over their fate.

These college students tend to be more stressed and are prone to clinical depression. With internals they exhibit two essential characteristics which are the high achievement motivation and low-directedness. This basis of the locus of control was proposed by Rotter in 1966 (Baum, 1997). Rotter’s undimensionality has been challenged by Levension who argued that different dimensions of locus of control like the belief that events in ones life are self-determined are chance based and organized by others.

Locus of control has impact upon smoking behavior among college students.

A study indicated that, smokers who tend to resume smoking after are among college students who have external locus of control. Those students who persistently avoid cigarettes believe that they have a great power of control over their lives compared to those who resume smoking (Baum, 1997). Students will be aware of the repercussions of the secondhand and first hand smoking such as the cancer and death. The majority of college smokers are men compared to women (Haworth & Iso-Ahola, 1997). The majority will have tried to quite the habit of smoking but the locus of control will predicts the attempts to quit.

The smoking of important others predicts the participants smoking status (Haworth & Iso-Ahola, 1997). Almost every college or university claims that their campus has a drinking problem. More police may be released during the evening hours so as to discourage drinking among students. Programs are implemented trying to teach students about safe ways to drink alcohol and to recognize alcohol related problems. In all these situations the campus and the students try to reduce the behavior of drinking. When discussing norms one should differentiate between descriptive norms and the inductive norms.

The descriptive norms describe actual behavior e. g. the behavior of drinking alcoholic beverages. An inductive norm would represent approval of the drinking behavior. In 2003 Borsari and Bosari had conducted meta-analysis concerning the effects of inductive norms along with the normative norms in relation to drinking behaviors in college and any other discrepancies, which involves the differences in beliefs between self and judgments of others (Haworth & Iso-Ahola, 1997). Locus of control can refer to the degree to which people have to report a sense of personal control.

A study shown that the more the college psychology students trusted their actions allowed them to take control over chance events, the more like they were able to exhibit superstitious behaviors. A study carried earlier found that is a positive relationship between external locus of control and belief in self-oriented superstitions. Low belief in self-efficiency in undergraduate students had to be positively linked with superstitious behavior. Among the college students optimism has been linked to internal lows of control and the pessimism has been associated with the external locus control.

Rudski (2000) had placed undergraduate students in a competitive condition so as to measure superstition and the illusion of control. Those students who were placed in a winning environment in a competitive condition they increased their superstitious belief. There was also a link supporting the self efficiency and the increased use of superstition. Another study evaluated the superstitious roles which created by participants an attempt to solve the task without instructions and the relationships with the locus of control.

Hence, it is presumed that personal accountability and the locus of control have to do with the effects for the sensibility to the environment changes. A notable finding of a certain study was gender effects for the different set of changes. The male students were more likely to experience PTSD symptoms compared to the female students. Female students seemed to be more likely to and get more concerned about the safety and security issues than the male students (Haworth & Iso-Ahola, 1997). Anderson and Schreier who had a study a sample of the college students found that internal locus control to have a direct relation with performance.

Student leaders were more likely to have internal in locus of control than non-leaders (Haworth & Iso-Ahola1997). The superior group performance was recorded among the internal focus leader. Another study show that students who had a career goal had a higher self esteem from the studies it is reasonable to have suggestions that adolescent adjustment has a relation with high self esteem. The internal focus of control and the family structure it also appears to be reasonable to believe that career goals and reasonable behavior are signs of adjustment.

There is a reasoning that students who become leaders might aspire to more prestigious careers that might further testify to their psychological and social adjustment. The purpose of the study was also to address the question of the variables that are related to the leadership behavior which seems to clearly signify the adjustment. There was an assessment of independent and combined esteem of self esteem of focus control carrier goals leadership behavior and family structure (Haworth & Iso-Ahola, 1997). Those students who were identified being high in leadership potential seemed to be higher in self esteem.

Had internal focus of control and would have more carrier aspirations and would have two biological parent family compared to those who had an external focus of control (Haworth & Iso-Ahola, 1997). Another factor that has been separately examined involving focus control but appears to be related to the text anxiety is what is referred to as test format. Studies of college students pertaining test format revealed that college students may experience less test anxiety when there is a preferred test format and they prefer objective tests to subjective tests.

In the comparison of the two mostly used formats multiple choice is preferred to essay by most college students (Landow, 2006). However the investigations were non -experimental in nature and the relationship between test anxiety and test format has speculated based on the student test format performance (Neil Anderson, Graversen, 2001). With this relationship among the test format test anxiety and the test performance according to the results of the study given above it just appears logical to speculate essay format evoke high test anxiety than the multiple choices format.

A study was conducted to look into the format effects of locus control and the test format and the test anxiety in a quasi experimental context (Neil, Graversen, 2001). Noting that students with internal locus of control have better control of their academic behavior we can expect externally oriented students to be less affected by the test format. So as to support the interpretation relationship between the students attitude towards the test format along with anxiety had to be examined (Neil, Graversen2001). A person with an internal focus of control attributes his success to his own efforts.

A person who is self motivated is more likely to succeed. He is going to seek and enquire more information making him to have good study habits which leads to good academic performance (Neil, Graversen, 2001). On the other hand a person with external focus of control will contribute his success to luck and will have less effort needed to learn. Students with internal focus of control tend to have better adjustment to college and are successful academically and in their social life. Studies show that focus on control has a negative correlation with course withdrawal and failure.

A person with an external locus of control attributes his success to luck or fate and makes less effort to learn. He will experience anxiety because he believes he is not in control of his life. The students with an internal locus of control have better adjustments to college in term of academic achievement and social adjustment. This is cause by a strong inner being and the understanding that he has an upper hand in his life. They are able to live with people from all walks of life because they know what can affect them is the decisions they themselves make (Viorst, 1999).

Impact of Locus of Control on Achievements In Life. (2016, Dec 09). Retrieved from http://studymoose.com/impact-of-locus-of-control-on-achievements-in-life-essay 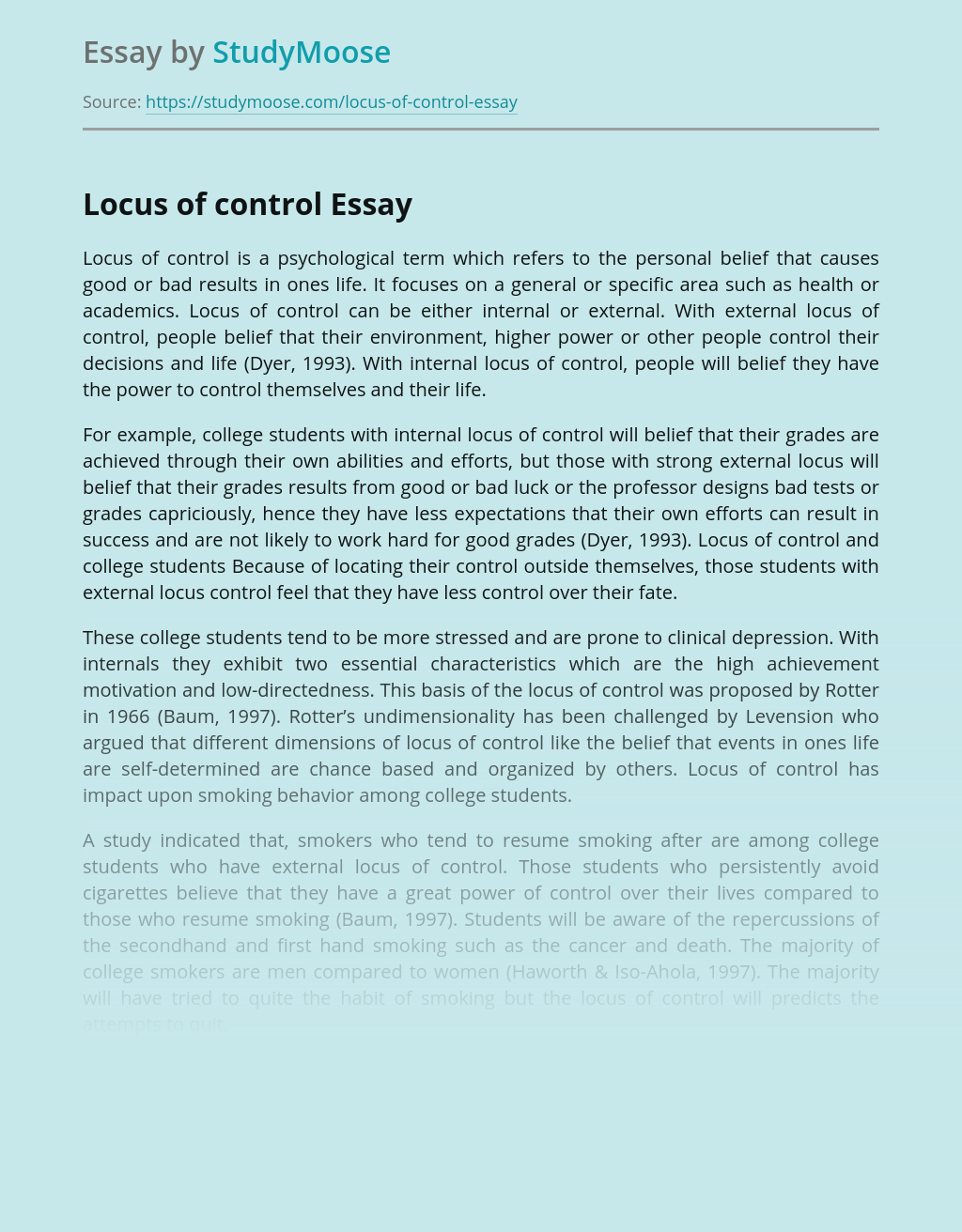 Don’t waste time
Get a verified expert to help you with Impact of Locus of Control on Achievements In Life
Hire verified expert
$35.80 for a 2-page paper
Stay Safe, Stay Original